Bad Publicity Isn’t All The Same

Several weeks ago we looked at United Continental Holdings’ (NYSE: UAL) seeming immunity of its business to bad publicity. We discussed how the price- and convenience-sensitive booking behavior of customers and similarly poor perception of rival airlines likely kept the passengers coming back to United despite numerous high-profiled confrontations with passengers.

Yet, not every case of bad PR is inconsequential to the stock price. Consider the case of Chipotle Mexican Grill (NYSE: CMG), which has had another health scare this month.

A franchise in the state of Virginia had to temporarily close after multiple customers became sick after ingesting food ordered from that restaurant. The official count of confirmed norovirus cases is two so far, but according to a website where people can report food poisoning, more than 130 people have claimed they became sick after ingesting food from that Chipotle location. How many of the claims are legitimate is unknown, however.

Chipotle has since disclosed that U.S. federal prosecutors have served it a subpoena to seek information related to the July outbreak. The subpoena is part of the ongoing criminal investigation into the series of outbreaks of E. Coli, salmonella and norovirus outbreaks in 2015.

As you can see in the chart below, even before the latest health scare, the stock was trading at a level well below its 2015 high. The share price has not recovered from the bad PR suffered in 2015. 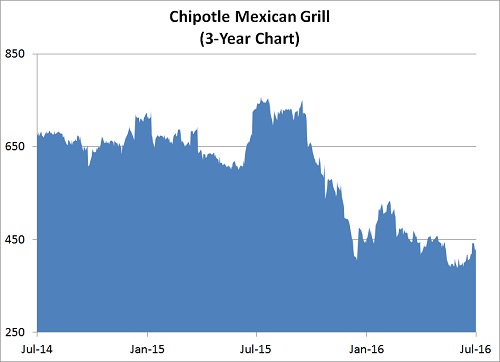 The reason is that in Chipotle’s case, business did get significantly affected by the food poisoning cases, the news of which spread nationwide in the traditional media and through social media. Customer faith in the brand eroded and foot traffic thinned. Through a massive marketing effort to restore its image, Chipotle was beginning to attract customers back when this latest case erupted.

For a restaurant which built a brand centered around a healthy image, such food-borne disease outbreaks are a disaster. Continuing the United analogy, a restaurant whose food makes people sick is akin to a hypothetical airline that has a string of serious accidents on the runway and in the air.

This recent outbreak appears to be an isolated case of food contamination caused by food contact with a sick employee rather than a fundamental problem with how the chain sources or processes its food. Nevertheless, the latest episode has gotten a lot of coverage on the air, in print, and throughout social media, so only time will tell if there will be any sizable fallout.

The market seems to think that the latest bad PR will have a notable impact on business as the stock price has sunk by about 10 percent since the Virginia closing news broke. In order to convince the market otherwise, Chipotle will likely need to demonstrate some good metrics, for example, same-store sales figures staying largely the same or improving. Referring back to the United example, once monthly passenger data showed that the David Dao incident had no discernible impact on bookings, the share price resumed its upward trajectory.

On the other hand, if upcoming data does confirm the market’s concern, then the share price will likely continue to suffer for a while until the company climbs out of the PR hole. However, as devastating as safety problems can be on a company in the short and even near term, sometimes companies can come back.

Twelve years ago, Biogen (Nasdaq: BIIB) had to pull a key MS drug, Tysabri, off the market after some patients who took the drug developed a deadly brain infection called PML. A scenario such as this would typically have marked the end for most drugs, but Biogen worked with the FDA and continue to test Tysabri for safety. Due to its high efficacy and Biogen’s ability to stratify risk to identify those patients most at risk for developing PML, the FDA allowed the drug back on the market, with special labeling, in less than 18 months. Today, Biogen owns a leading MS franchise and is one of the largest publicly traded biotech companies in the world.

Thus, if Biogen can come back from a disaster such as the Tysabri fiasco, Chipotle can too. Of course, the difference is that Chipotle does not have the differentiating factor that Tysabri enjoyed. However, before the latest outbreak, the numbers suggested that the impact from the 2015 incidents was finally wearing off and customers were returning.

Based on what’s known right now about the recent norovirus contamination, as noted above, the case doesn’t appear as severe or widespread as the 2015 outbreaks. Assuming no other outbreaks occur, this latest blemish may turn out to be just a blip in the restaurant chain’s turnaround story rather than a death knell.