ConocoPhillips Had A Great Quarter

When oil prices started to crash in 2014, ConocoPhillips (NYSE: COP) was in the midst of several multi-year, multi-billion dollar projects. But falling commodity prices caused a severe cash flow deficit, and the company responded by cutting its dividend by two-thirds, slashing capital spending, and divesting some of its holdings.

ConocoPhillips has endured many cycles in the oil industry, so they know how to survive the down cycles. The company’s 2nd quarter earnings release continues to validate the company’s approach.

In the 2nd quarter of 2017, ConocoPhillips reported adjusted profits of $178 million and over $1.6 billion of operating cash flow. This was the fourth consecutive quarter in which operating cash flow more than covered capital spending ($1.0 billion) and the dividend ($0.3 billion).

The cash from the asset dispositions was used to retire $3.2 billion in debt and to buy back $1.0 billion in company stock. The share buyback reduced the share count by 2%, and total debt dropped to $23.5 billion. The company ended the quarter with $10.3 billion in cash, which brought net debt at the end of the quarter down to ~$13 billion. 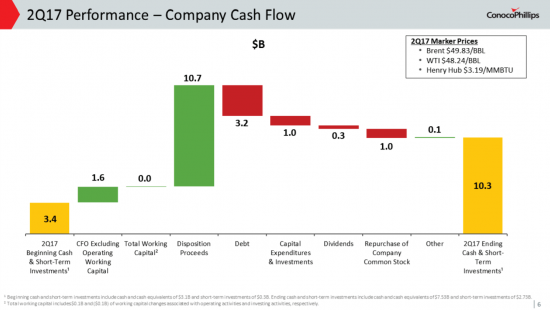 During the quarter, ConocoPhillips operated 12 drilling rigs in the Eagle Ford, Bakken, and Permian Basin. Production excluding Libya for Q2 was 1,425 thousand barrels of oil equivalent per day (MBOED), a decrease of 121 MBOED year-over-year (but exceeding the upper end of guidance). Lower production was a result of asset disposition; excluding the impact from closed and signed dispositions, underlying production increased 30 MBOED, or 3%.

For the rest of 2017, the company expects to pay debt down to less than $20 billion, to buy back another $2 billion in shares (reducing the share count by another 4%), and to increase underlying production by 25 MBOED. COP expects to grow full-year production by 2% to 4% even as they lowered capital spending guidance by $200 million to $4.8 billion.

Despite the significant and continued improvements in performance, shares of ConocoPhillips declined in the 2nd quarter by 12%, along with the rest of the energy sector. Shares are down by 9% year-to-date, which is primarily a reflection of continued pessimism about the overall energy sector.