How to Preserve Capital When the Proverbial Stuff Hits the Fan

Sure, stocks over the long term have historically bounced back from even the worst corrections. But as economist John Maynard Keynes famously said: “In the long run, we are all dead.”

What did this giant of the economics field mean by his oft-quoted remark? Simply this: Immediate financial needs often can’t wait for historical inevitability.

In these perilous market conditions, if you’re a new retiree or getting ready for your golden years, you must emphasize preservation of capital without incurring a disproportionate opportunity cost.

Below I pinpoint three stocks that offer a combination of growth, income and safety. These crash-resistant equities belong in any retirement portfolio. I also provide guidelines on how to crash-proof your portfolio to help you keep the capital you’ve already got.

But first, let’s examine the lessons of an event that most investors prefer to forget: The Great Financial Crash of 2008. Throughout the fall of 2008, the major financial markets lost more than 30% of their value. By the low point of the subsequent recession, Americans’ retirement savings had plunged by $2.5 trillion, 8.8 million people had lost their jobs, and 3 million homes had gone into foreclosure.

Fast forward to today. From the market bottoms of March 2009, the S&P 500 has risen more than 180%. This bull market is more than eight years old and investors keep waiting for a correction that never seems to happen. The ostensible history lesson is to stay long and patiently ride out any downturns.

But here’s the rub: If you’re in or nearing retirement, you can’t afford the time nor income of taking a big hit. You must adopt a practical and not historical approach to the likelihood of a correction. Most investors, especially income investors who are about to retire or can’t rely on a paycheck, aren’t able to weather a crash that clobbers their portfolios at exactly the time that they’re withdrawing income.

When assets are priced for perfection as they are now, it takes little disappointment to send them lower. As corporate CEOs and even Republican Senators increasingly distance themselves from President Trump in the wake of his erratic response to the Charlottesville riots, Wall Street has mostly abandoned hopes of tax cuts and fiscal stimulus.

After only eight months in office, the president is deeply unpopular and his agenda appears stymied. Never mind overhauling the tax code. On the docket when Congress returns in a few weeks is a series of nerve-wracking deadlines. Divided lawmakers must pass a federal budget or the government will shut down; they also must raise the debt ceiling or the U.S. goes into default. The White House can’t be counted on to provide stable leadership on either of these thorny issues.

The upshot is that investors have a lot to worry about in September, a month that’s historically unkind to stocks to begin with. Already in recent days, the markets have tumbled while the Chicago Board Options Exchange (CBOE) Volatility Index, aka VIX or “fear gauge,” has spiked. The Dow Jones Industrial Average on Thursday posted its worst single-day decline in three months, down 274 points or 1.24%. The VIX on that day hit a level of 15.55, an increase of 3.81 or 32.45% from the previous market day (see chart).

The VIX Spikes: Omen of a Crash?

The trifecta: Growth, income and safety…

Economic growth that’s only good and not great is manna for utilities. “Goldilocks” growth (not too hot, not too cold) is their sweet spot. Growth has been strong enough to sustain utility sector revenue and profits, but insufficiently robust to prompt the Federal Reserve to raise rates too far, too fast. That’s a lucky break for utilities.

I particularly like utilities with substantial footprints in green energy, notably NextEra Energy (NYSE: NEE). Sporting a dividend yield of 2.62%, NextEra is a major provider of alternative energy with a generation capacity of about 46,400 megawatts. The average analyst expectation is that NEE’s year-over-year earnings growth will reach 8.6% this year and 7.7% next year.

Since 1980, NextEra has never stuck investors with two consecutive years of losses. About 60% of the company’s earnings stem from regulated utility operations, with the rest from wholesale power generation, providing diversity that should buffer the stock from the volatility of the broader markets.

Aerospace/defense is another attractive sector. Aircraft maker and defense contractor Boeing (NYSE: BA) has soared more than 51% year to date, with sufficient commercial and military orders in the pipeline to propel it further. The average analyst expectation is that BA’s year-over-year earnings growth will reach 37.4% this year and 7.6% next year. The dividend yield is a solid 2.40%.

Technology stocks have been the real stars of 2017 and select tech stocks with strong cash flow should hold up well if there’s a correction. Although tech stocks have pulled back in recent days due to disappointing earnings guidance from behemoths such as Cisco (NSDQ: CSCO), the benchmark Technology Select Sector SPDR ETF (NYSE: XLK) has generated a year-to-date return of about 19%, compared to 11.4% for the S&P 500.

If you’re looking for reasonably valued tech stocks with further room to run, consider blue-chip Microsoft (NSDQ: MSFT). Microsoft’s maturing, cash-rich business model enables it to spend less on research and development and more on returning value to shareholders in the form of dividends.

With a market cap of $557.6 billion, Microsoft enjoys a dominant global position in operating system and document processing software. Microsoft’s Windows is the most popular operating system in the world, but Microsoft has shrewdly diversified into several new areas, such as cloud computing, that generate steady and recurring revenue.

Microsoft boasts a fortress-like balance sheet that allows you to partake of tech sector growth with a strong measure of safety. The company’s cash on hand exceeds $129.2 billion, a war chest for acquisitions as well as a cushion during downturns. The average analyst expectation is that MSFT’s year-over-year earnings growth will reach 12.5% next year. The healthy dividend yield of 2.12% is icing on the cake.

When the markets head south… 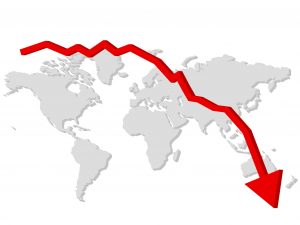 The rest of this year promises to be volatile, with dangerous unknowns lurking at home and overseas. Your capital preservation strategy should include the right asset allocation, tailored to your financial goals.

Asset allocation is an art as well as a science. It’s the investment alchemy whereby you balance several ingredients for the proper admixture of risk and reward. If you’re too heavily weighted towards risky growth stocks, you could pay a steep price in 2017 and into 2018 if many analysts are correct and a market correction occurs.

According to some financial industry studies, about 90% of portfolio performance is related to asset allocation. That’s an eye-opening statistic.

Of course, in a bull market, your allocation should emphasize stocks. In a bear market, you should lighten up on stocks in favor of bonds and cash. And in a transitional market that’s “in between,” you should strike a balance. At all times, your portfolio should steer clear of overvalued equities.

Under today’s conditions, regardless of your stage in life, you should elevate your cash level to at least 25% and put at least 30% of assets into hedges. If your portfolio takes a sharp turn for the worse when you’re in your 40s, you still have plenty of time to bounce back. But if your investments take a nosedive while you’re, say, 65, you’re in a far worse predicament.

Some stocks appear alluring but they’re dangerous investments you should avoid now, at any stage of life. Shun momentum stocks that have been bid sky-high. Emblematic of this vulnerable breed is the so-called “FANG” coterie of Facebook (NSDQ: FB), Amazon (NSDQ: AMZN), Netflix (NSDQ: NFLX), and Google, which is now Alphabet (NSDQ: GOOGL).

Financial pundits yammer on about FANG and other sexy stocks such as social media company Snap (NYSE: SNAP) and meal-kit delivery service Blue Apron (NYSE: APRN), but these over-hyped equities will be among those that fall the hardest when the “you-know-what” hits the fan.