Before the shale oil boom, the price of West Texas Intermediate (WTI) usually traded at a slight premium to Brent crude because it was of better quality. Compared to Brent, a barrel of WTI produces a higher yield of finished products at a slightly lower processing cost.

However, the shale boom caused a U.S. crude oil production surge that local markets had difficulty absorbing. Compounding that problem was a long-standing crude oil export ban (since repealed). A glut of crude developed across the mid-continent region of the U.S. and the domestic WTI benchmark began to trade at a discount to the international Brent crude benchmark.

This glut of crude was great news for refiners, who could buy discounted crude at WTI prices and sell the finished products into the export market at prices dictated by the price of Brent crude. That’s just what they did, and gasoline and diesel exports have been rising ever since: 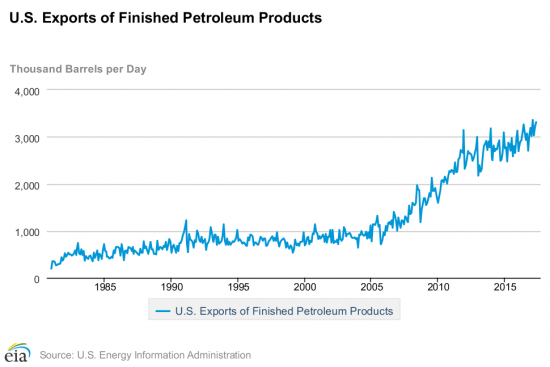 At one point the WTI discount exceeded $20 a barrel (bbl), but the collapse of oil prices in 2014 and the repeal of the crude oil export ban in late 2015 caused the discount to all but vanish. Over the past year, WTI has traded in a range from a $1/bbl premium over Brent crude (bad for U.S. refiners) to a ~$2/bbl discount.

However, this week the discount jumped above $4/bbl, which is the highest level in more than a year. There are two primary reasons for the increased discount. First, U.S. crude production has risen significantly over the past year, so there is more supply that is based on WTI pricing.

Second, Brent prices have risen in response to OPEC’s production cuts. These cuts have a greater impact on the price of internationally traded crudes like Brent.

One thing is certain. As long as this trend holds, it’s good news for refiners like Valero (NYSE: VLO), Phillips 66 (NYSE: PSX), Marathon Petroleum Corp (NYSE: MPC), and Andeavor (NYSE: ANDV). The refining group has managed to thrive despite the narrower discount of recent years, but a deeper WTI discount should result in better earnings for this quarter.

Constitution Pipeline Gets A Thumbs Down

The Marcellus Shale found largely underneath Pennsylvania, West Virginia, southern New York, eastern Ohio, and extreme western Maryland is the most important natural gas-producing region in the U.S. It is every bit as critical to U.S. natural gas production as the Permian Basin is for U.S. oil production.

Much of the Marcellus production to date has taken place in Pennsylvania, but producers there have contended with insufficient infrastructure to get their product to market. As a result, and analogous to the WTI crude oil discount, Marcellus gas producers have been forced to sell their gas at well below the price they could receive in major markets.

Pipelines are being built to alleviate the situation. The Constitution Pipeline is being built by a partnership between Marcellus natural gas producer Cabot Oil & Gas (NYSE: COG) and Williams (NYSE: WMB). This pipeline would connect Cabot’s gas fields in northeast Pennsylvania to markets in New York.

The Federal Energy Regulatory Commission (FERC) approved the project, but it was later blocked by the New York Department of Environmental Conservation (DEC). Cabot and Williams challenged the latter decision in court.

Last week the Manhattan-based U.S. Court of Appeals for the Second Circuit agreed that the New York DEC has the authority to block the project. This ruling is a clear blow for Cabot, which nevertheless has seen its shares rise since the decision.

The project is now probably a long-shot, although the companies involved indicated that they would continue to seek final approval from FERC.