Disappointing earnings from market-moving stocks pushed major indices lower on Wednesday. After a string of record-breaking sessions that saw the Dow Jones Industrial Average sprint past 23,000, a pullback was to be expected.

Civil war in the Republican party and lackluster corporate scorecards turned traders cautious on Wednesday. Dow component Boeing (NYSE: BA) weighed on the index after the aircraft maker revealed an unexpected charge in the third quarter. BA was one of the day’s biggest losers, closing down 2.85%.

Generally, third-quarter earnings so far have been strong. But make no mistake, this bull is an aging, wheezing beast approaching its ninth year. In the days ahead, we’ll get further clues from earnings reports as to whether the long-awaited stock market correction is imminent.

Here’s what you need to know right now:

Operating results to watch in the days ahead:

The bozos in Washington are dying to get their hands on your retirement money. Perhaps that’s why 401(k) plans are among the frequently asked questions from my readers. Before I get to your emails, let’s review the latest shenanigans in the nation’s capital.

Congress is currently debating measures to limit the tax advantages of 401(k) plans. A report surfaced this week that the Republican tax bill might include a provision that would cap tax-free contributions to 401(k) plans to $2,400 per year, down from $18,000 this year. The objective is to find money to pay for tax cuts for corporations and the wealthy.

Not surprisingly, the cap proposal provoked howls across the political spectrum.

President Trump on Monday promised that 401(k)s wouldn’t be touched in tax legislation. The American Retirement Association on the same day stated that any contribution cap would amount to a middle-class tax increase.

The president’s vow and lobbyist pressure against the cap idea are complicating efforts to forge a bill that won’t increase the deficit. The situation got even murkier on Wednesday, when the top tax writer in the House contradicted the president and said the $2,400 per year cap was still on the table.

With 401(k) plans in the crosshairs, I answer two reader queries on the topic:

Terry, you’re right to be concerned. If any reader thinks their 401(k) is free, think again. In fact, it’s quite the opposite. These plans are packed with costs you probably don’t even know exist. Study your 401(k) packet and beware of the following:

Back-end load. The redemption charge an investor pays when making a cash withdrawal from a 401(k) plan.

Front-end load. A sales charge applied to an investment at the time of initial plan purchase.

Management fee. The amount charged against investor assets for advisory services. The standard mutual fund management fee is between 0.5% and 2% of total assets.

12b-1 fees. The annual fees mutual fund firms charge 401(k) plan participants for the costs they incur marketing their funds. The 12b-1 fee is considered an operational expense and is therefore included in a fund’s expense ratio. It is generally between 0.25%-1% (the maximum allowed) of a fund’s net assets.

“Do you have a list of recommended hedges that would be suitable for a 401(k) account?” — Darrell B.

Hedges include stocks or funds with exposure to precious metals, real estate investment trusts, and commodities. The ones you choose depend on your investment profile. Investors should increase their portfolio weighting to hedges as protection against a stock market correction.

Some 401(k) plans feature few investment options. See if your plan administrator offers a brokerage option that lets you invest in securities other than the mutual funds offered in the plan.

Got any questions? Drop me a line: mailbag@investingdaily.com — John Persinos. 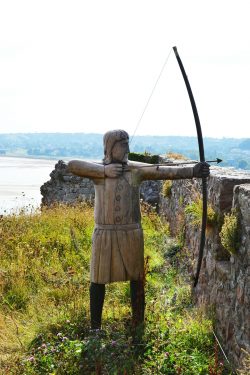 October 25, 1415: An English army under King Henry V defeated the French at Agincourt, France. The French fielded knights wearing armor and on horseback; they outnumbered Henry’s troops 60,000 to 12,000.

Henry’s men had neither armor nor horses. But they had something better: longbows.

Longbows were the wonder weapons of their day. They shot arrows at high enough velocity to pierce armor, making French knights helpless. Longbows also could fire arrows more quickly and at greater range than conventional bows.

The longbow didn’t just arrive on the scene overnight. It was the product of years of refinement. The English army also invested in the training of proper longbow use. This disruptive technology was spawned by patient research and development combined with the foresight to see it through.

Celebrated in Shakespeare’s play Henry V as well as in numerous movies, stories, songs and poems, the Battle of Agincourt was one of the great turning points in history. Henry’s underdog victory marked the rise of England as a global power.

In addition to using innovative weaponry, Henry inspired his men by displaying courage and inclusiveness. In Shakespeare’s account, the young king delivered a rousing speech before the battle that referred to his army as “we few, we happy few, we band of brothers.”

The lessons for investors: embrace disruptive technology; maintain your fortitude when the chips are down; make incremental investments that will pay off down the road; work in collaboration with others; and stick with your vision. In the world of money, those are the tactics that win the battle.

According to a recent YouGuv survey, 28% of American adults use the same password for most of their online accounts. That’s dangerously lazy.

To safeguard your personal data, you must remain vigilant. The world of investing is a digital one. Problem is, computer hacking incidents are ballooning in frequency and severity, making cybersecurity a top concern around the globe.

The Norton consultancy reports that the global price tag for cybercrime exceeds $110 billion annually, in the form of fraud, theft, repairs and loss.

Carefully guard your log-ins, passwords and financial data. Create robust passwords and make them different across accounts. Frequently change your passwords. Your life savings can disappear in a single hacking incident.

“There is no reason anyone would want a computer in their home.” — Ken Olson, founder, Digital Equipment Corp. (DEC), speaking in 1977 about the rising personal computer industry.

DEC made minicomputers for businesses. As tech entrepreneurs revolutionized society, Olson never was able to re-position the once-mighty DEC. In 2002, DEC merged with Hewlett-Packard (NYSE: HPQ), which stopped using the DEC name.

The moral: beware of “wisdom” peddled by corporate chieftains. Sometimes, they don’t know what they’re talking about.