When a bull market rampages on, it seems that almost anything you buy goes up. It gives many investors the feeling that hey, this investing game is easy. Makes ’em feel like financial geniuses.

Always a bad sign. I’ll explain why. But first, let’s examine the latest outbreak of euphoria.

The bull notched new records on Thursday. The Dow Jones Industrial Average sailed past the 25,000-mark for the first time. The Dow’s climb to this lofty level took 23 trading days, the fastest 1,000-point rise in the index’s history.

The S&P 500 and Nasdaq also closed in the green, staying above their landmark levels of 25,000 and 7,000, respectively. The health and retail sectors were the top performers Thursday.

The first three trading days of 2018 showed that the market’s mojo isn’t waning. But the music is bound to stop. Excessive valuations, a White House in chaos, the specter of inflation, a budget-busting tax bill, nuclear brinkmanship — the list of worries is a long one.

Only in hindsight does the timing of a correction seem inevitable. When the books are closed on 2018, it’s unlikely that this year will resemble the boom of 2017. For one thing, deregulation and the ballooning of the deficit make it difficult for the U.S. to build up fiscal buffers. The next time a recession hits, the government’s toolbox will be sparse.

Make no mistake: we’re overdue for a recession. We’re also overdue for a correction. You may find these warnings tiresome. But it’s even more tiresome to see your gains disappear like spit on a griddle. There’s still money to be made in this market. But not in Bitcoin, nor dubious IPOs, nor tech stocks with lousy fundamentals.

Your watchword should be defensive growth. Stick to quality. And I beseech you to ignore the carnival barkers on financial television. Their agenda is to line their pockets, not yours. These TV shows are non-stop festivals of idiocy.

But in the meantime, even a curmudgeon like me must admit that the economic backdrop is encouraging. The major indices rose to new highs on Thursday, in the wake of a robust jobs report.

The ADP National Employment Report released on Thursday showed that U.S. private employers added 250,000 jobs in December. That’s the biggest monthly increase since March and above the expected 190,000 job additions.

Minutes of the Fed’s December policy meeting published on Wednesday showed officials optimistic about the economy. The Fed plans to raise rates three times in 2018. However, the stimulus from the $1.5. trillion in tax cuts could prompt the Fed to hike rates more often. The wild card is inflation, which could spike unexpectedly higher if the economy overheats.

The GOP tax bill will raise taxes on millions of working Americans. (Someone has to pay for those corporate tax cuts.) But one benefit is clear: the cash in corporate coffers will fuel mergers and acquisitions (M&A). That’s a tonic for stocks.

Worldwide M&A activity totaled US$3.6 trillion during 2017, roughly equal with 2016 and the fourth consecutive year to surpass $3 trillion. Overall, 49,448 deals were announced during 2017, an increase of 3% compared to a year ago and the strongest year for M&A, by number of deals, since records began in 1980. We’re on track for another banner year in M&A. 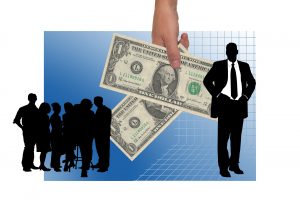 Amid the positive statistics, one ingredient is missing: solid wage growth. It’s why many Americans feel left behind by the recovery. It’s why many of them voted for Donald Trump.

The next recession could spell big trouble. America is polarized. Wages are stagnant. Taxes were cut for the wealthy but not the middle class. In a downturn, resentment could breed unrest.

Unemployment currently stands at 4.1%, the lowest since 2000. That’s close to full employment. It’s the level at which employers have trouble finding workers. In theory, they must pay more to compete for talent. Not this time around.

As of November, wages were only up 2.5% compared with a year ago. Economists are puzzled. One theory is that Baby Boomers are retiring at peak earning power and getting replaced by younger, lower-paid workers.

The final jobs report for 2017 comes out on Friday. The metric to watch isn’t the headline unemployment rate. It’s hourly wage growth.

Unless paychecks start growing faster, the consequences for American living standards — and the stock market — could be dire. But for now, the party continues. 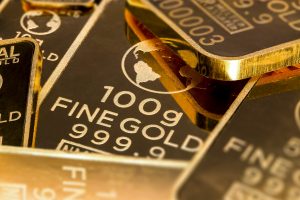 Hedges should make up about 30% of your portfolio. Make sure at least 5%-10% of your hedges are in precious metals such as gold.

The easiest and safest way to gain exposure to gold is through exchange-traded funds. Gold closed Thursday at $1,323.50 per ounce. The consensus forecast is that the yellow metal should reach at least $1,370/oz in 2018.

Need guidance to protect your portfolio? I’m here to answer your questions: mailbag@investingdaily.com