Should You Buy into the Marijuana High?

In the first two trading days of 2018, few stocks lit up the boards more than marijuana-related stocks. Investors rushed to buy shares in reaction to the sales launch of legal pot in California.

California is not the first state to legalize marijuana, but it’s the biggest in terms of population. In other words, the new law opened up the largest market in the U.S. to pot. Demand is so strong that users reportedly formed long lines around the block to get their stash.

According to a research firm legalization of pot in California could directly create almost 100,000 jobs in the state. U.S. sales of legal pot could pass $20 billion per year by 2021. Overall economic impact could be $40 billion by that time. 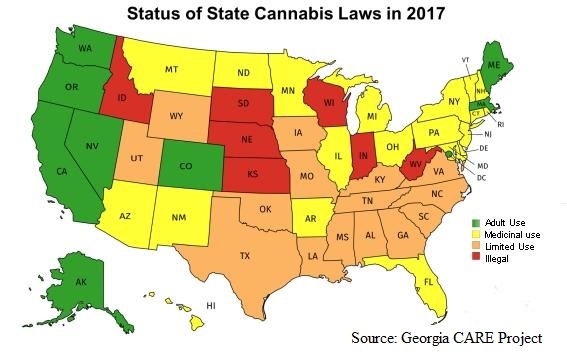 As you can see in the map, green states are still in the minority. Bulls hope that many more states will turn green in the years ahead. After all, public acceptance of pot legalization is growing.

Before getting caught up by the hype, however, it’s important to remember that marijuana is still illegal on the federal level.

In reality, the federal government would only go after the biggest fishes in the sea, so the overall marijuana industry’s growth should not be much affected. However, the hint that Washington could interfere was enough to cause a big drop in the same marijuana-related stocks.

After all the noise dies down, the marijuana industry should still experience solid growth. Investors just have to be careful not get too carried away and separate hype from quality.

Not an easy Choice

Hundreds, if not thousands, of startup companies will try to catch the legalization wave, but most will probably fail. Because marijuana is still illegal on the federal level, marijuana companies have little access to even basic banking services, which makes it difficult to run a public company. Rather, it is safer to bet on the established public companies that are able to shift focus to pot.

So what if you want to make some money in marijuana stocks? What should you buy? The answer may not be so clear.

The landscape is still so in flux that it would be hard to bet on specific companies. The better choice may be bet on the whole industry.

One Size Fits All

This can be done through an ETF, such as the ETFMG Alternative Harvest ETF (NYSE: MJX). The fund invests in companies in different marijuana-related areas and even has many Canadian stocks.

Canada legalized medicinal use of pot in 2001, and it could legalize recreational use soon. This would make Canada an even better place to invest in marijuana.

When it comes to investing in marijuana, investors should tread carefully. There’s money to be made but the risks are also high. When it’s hard to pick one of two winners, it may make sense to bet on a group instead.