Considered by posterity as the definitive “oil baron,” John D. Rockefeller had amassed a fortune in today’s dollars of nearly $210 billion when he died in 1937. He holds the record as the richest American ever and certainly one of recorded history’s richest persons.

For generations, the Rockefeller surname has been synonymous with vast wealth. How did he reach the pinnacle of capitalist success? By tapping hidden value. He accumulated undervalued energy investments that exponentially appreciated in price as they went on to dominate their markets.

Oil is the lifeblood of the modern industrial age; it’s the most important commodity in the world. And when conditions are ripe… as they are now …well, that’s how fortunes are made.

The New Gusher of Profits

Finding hidden value is what brought me to West Texas last week. The guy in the hard hat is me. 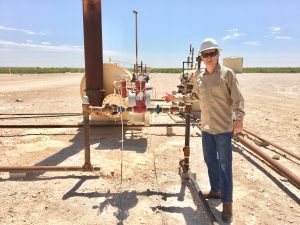 Looks can be highly deceiving in these parts. That’s what I thought as I drove around the Permian Basin. The land there sure looks worthless. It’s hot, dry, and inhabited by more roadrunners and rattlesnakes than people.

Stand on the ground there, and you might be oblivious as to what lies thousands of feet below. In the picture to your left, I’m standing over vast, untapped riches.

In some locations, there are the obvious above-ground signs that point to this hidden wealth. There are pump jacks, hard at work. In some areas, you can see dozens. The roads are full of trucks hauling all sorts of equipment. But in other areas — including the area where I spent most of my week — there’s hardly anything at all.

Oil production is booming in the Permian, which means the oil pipelines out of the region are full. This shale oil is called light and “sweet,” because it’s low in sulfur. New pipelines are being built, but there won’t be significant relief until 2019.

That’s somewhat bad short-term news for oil companies that operate in the Permian because it is causing Permian crude oil to trade at a significant discount to West Texas Intermediate in Cushing, Oklahoma or in Houston.

But the pipeline companies in the Permian are killing it.

Who are these companies? RBN Energy put together a nice graphic of the pipeline companies operating in the Permian: 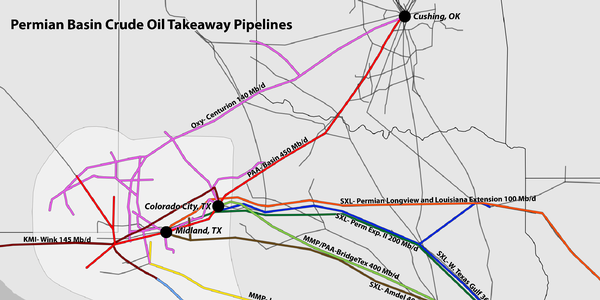 Most of these pipeline operators are organized as master limited partnerships (MLPs).

MLPs boast several tax advantages over corporations. For instance, they aren’t taxed at the corporate level. MLPs pass profits directly to unitholders in the form of quarterly distributions.

But because of the depreciation allowance, 80% to 90% of the distribution is considered a “return of capital” and thus also not taxable when received. Instead, returns of capital reduce the cost basis of an investment in the MLP.

MLPs were beaten down with the rest of the energy sector in 2014. However, even though most oil companies have rallied with oil prices, MLPs have not. There are several reasons for this, but I don’t believe any of them warrant the level of underperformance in the sector.

The Best in Class

Just consider Enterprise Products Partners, which I mentioned in last week’s article (Profiting from the Permian Bottleneck, May 15). They have a significant presence in the Permian Basin, including pipeline assets that are currently receiving premium prices for moving oil out of the region. 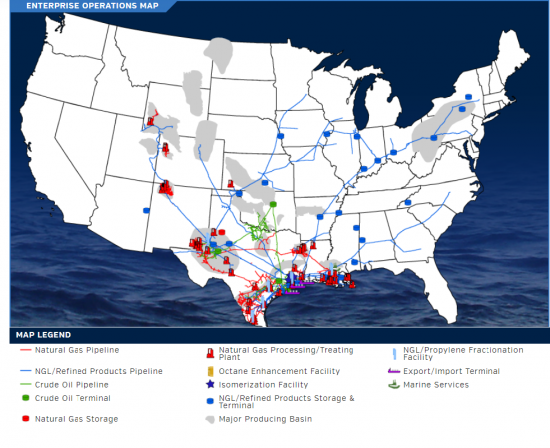 Given the constraints in the Permian Basin, it should come as no surprise that EPD reported a blowout first quarter. Compared to the EPD’s first quarter of 2017, distributable cash flow (DCF) in Q1 of this year climbed 23%, from $1.13 billion to $1.39 billion.

This was a great quarter for EPD, to be sure, but the MLP has consistently proven itself to be one of the most capable midstream operators for many years. Despite the huge drop in oil prices from 2014, EPD continued to grow, raising its distribution every quarter during the downturn while some competitors were forced to cut distributions.

EPD currently yields 6.1%. Its quarterly distribution grew nearly 20% during the oil downturn, yet EPD’s unit price is 30% below the level it was when oil was $100/bbl.

That’s the kind of hidden value that reminds me of scrubby, seemingly worthless land in West Texas. Land that sometimes sells for $60,000 an acre.

As I’ve just explained, MLPs are income-generating machines. And you don’t have to be a Rockefeller to get rich from them. If you’re looking for other sources of robust and steady income, click here for the details.