Energy: The Good, The Bad, and The Ugly

Even though energy is my specialty, I hadn’t intended to write about the topic again this week. However, recent events in the oil and gas sector are so significant, they compel me to once again focus on energy.

The stakes are enormous not just for energy, but for investors of all stripes. The fortunes of the energy patch and those of Wall Street are inextricably linked.

In the U.S., the energy industry supports more than nine million jobs directly and indirectly, which is over 5% of the country’s total employment.

According to recent statistics from Goldman Sachs (NYSE: GS), the energy sector accounts for roughly one-third of S&P 500 capital expenditures and roughly 25% of combined capex and research and development spending.

As I’ll explain, the latest news in this vast industry is a mixture of the good, the bad, and the ugly.

The EPA Declares War on Farmers

On the domestic front, the Environmental Protection Agency (EPA) released its proposed Renewable Volume Obligations for the U.S. biofuel mandate. The big news was that the EPA effectively reduced biofuel blending volumes by not reallocating volumes that had been waived due to hardship waivers granted by the agency.

The EPA also broke with precedent by refusing to allow comments on the decision not to reallocate. Scott Irwin, an agricultural economist at the University of Illinois, wrote on Twitter that this amounted to a declaration of war on corn/soybean farmers. Within the Trump administration, USDA Secretary Sonny Perdue also criticized the decision.

EPA Administrator Scott Pruitt has never been a fan of the Renewable Fuel Standard (RFS), and his agency will undoubtedly be sued over the decision.

Further, Pruitt has numerous critics inside and outside the “Washington Beltway” that would like to see him removed. Replacing him with a different EPA administrator might result in an entirely different outcome for biofuel producers. Until then, score this one as a win for refiners.

But that wasn’t the biggest news of the week.

Oil prices rose last week to the highest levels since 2014. What was behind this price surge? Ironically, it was an announcement by OPEC that it would increase production.

Oil prices had weakened over the past month following a call from President Trump for OPEC to increase production in response to rising oil prices. After rising above $70 per barrel in May, the price of West Texas Intermediate (WTI) had dropped back to $65/barrel leading up to OPEC’s June 22 meeting.

It was widely anticipated that the group would decide to bump output at the meeting. At the meeting’s conclusion, OPEC and its influential non-member partner Russia announced that the cartel would increase production for the first time since implementing production cuts in November 2016.

But WTI rallied by more than 4% following the announcement. Why? Because the market was underwhelmed by OPEC’s decision. The bad news is that OPEC’s move won’t re-balance the market.

OPEC announced that it would restore about one million barrels per day (BPD) to the market, beginning this month. Iran had opposed the move, partially in protest of sanctions from the Trump administration. In reality, the output increase isn’t expected to exceed 700,000 barrels per day because some members are already pumping at maximum capacity.

Further, this output increase won’t be enough to stabilize an oil market that still seeks equilibrium. The most recent Oil Market Report (OMR) from the International Energy Agency (IEA) projected the amount of oil that would be needed by OPEC through 2019 to balance the supply-and-demand equation: 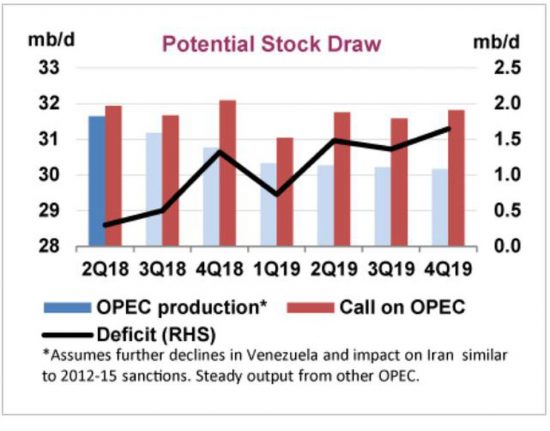 By the end of this year, the call on OPEC is expected to be nearly 1.5 million BPD more than they were forecast to produce. Consequently, even if OPEC managed to follow through on the full output increase, it would be insufficient to prevent further declines in global crude oil inventories. Expectations that this production increase won’t be enough to stabilize these inventory levels are the primary driver behind last week’s oil price surge.

Oil prices surged again on news that the U.S. was pressuring its allies not to import oil from Iran, lest they risk sanctions. Iran currently exports 2.9 million BDP of crude oil and condensate to Asian and European markets. Even if there is modest compliance with this Trump administration request, it could accelerate the depletion of global crude oil inventories. That would likely drive oil prices even higher.

That would also make U.S. oil producers happy. Refiners, on the other hand, would likely suffer. Higher oil prices erode the margins of refiners, resulting in lower profits. So even though refiners welcomed the good news on biofuel mandates, the spike in oil prices will probably have an ugly impact on earnings in the short term.

It’s not just the energy sector that’s getting roiled by uncertainty. So far this year, the broader equity markets have been on a roller-coaster ride, too. But my colleagues over at Radical Wealth Alliance have developed a time-proven investment system that doesn’t care about the direction of the markets. Their technique makes money in bull or bear conditions, in good economic times or bad, when markets are volatile or calm.

How do they do it? Click here to find out.