October 17 (today!) is the official Designated Day that recreational marijuana use is legal in Canada.

On this D-Day for marijuana, will pot stocks pop, or fizzle? Will 10/17 become the new pot holiday to supplant 4/20?

Four-twenty (4/20) is a ubiquitous slang term for smoking pot. According to weed folklore, it refers to the police code for “Marijuana Smoking in Progress.” In addition to being the unofficial “pot holiday” that occurs on April 20 each year, it is also the price that Tesla (NSDQ: TSLA) CEO Elon Musk arbitrarily chose for his taking private price for Tesla. (He claims he thought his girlfriend would find this funny.)

Now, the date 10/17 is worth celebrating for pot smokers and “canna-business.”

Regardless of Musk’s intentions, the date of his tweet asserting that Tesla might be taken private (August 7) nailed the top in Tesla’s stock. It is down 30% since then.

A handful of U.S. stocks are rocketing off the giddy anticipation that’s building for a wave of pot demand.

While the fundamentals and merits of each of these companies are debatable, the real question is, will the launch date of legal pot in Canada mark the top price in these stocks? 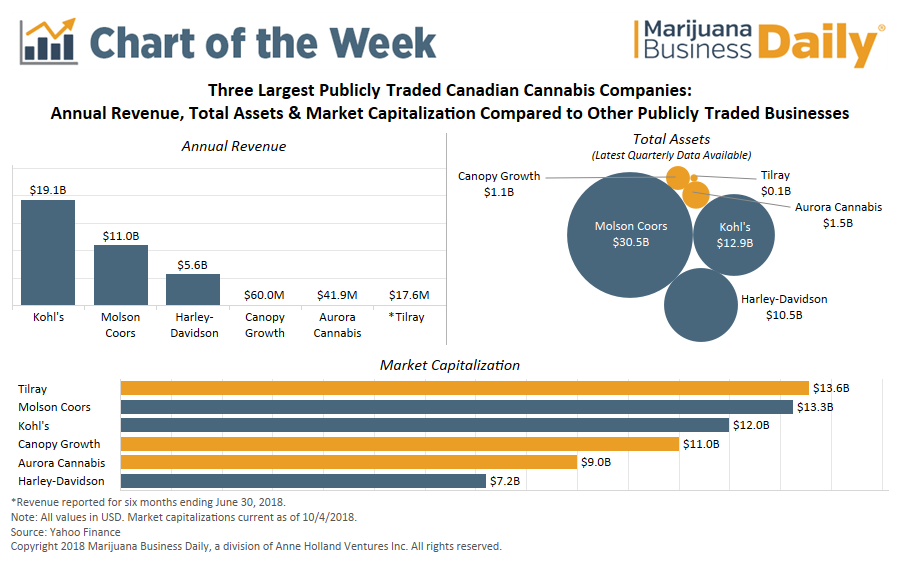 Elon Musk’s tweet about taking Tesla private at $420 a share marked an interim top for the electric car maker’s stock. Likewise, the highly anticipated date of 10/17 might not deliver the expected rush of pot stock riches. Many times momentum stocks are subject to a “Sell on the News” psychology.

In April 2017, Canadian legislators introduced Bill C-45, which proposed to legalize the recreational use of marijuana nationwide. It passed by the House of Commons in November 2017 with a plan to set a legalization date roughly one year later.

As opposed to the United States, which has taken a state-by-state legalization process, Canada chose to pass a federal law and then allow each province and territory to curate the details of its rules and procedures.

For example, the Canadian federal ruling established a legal purchase age of 18, but many provinces chose to require a 19 year age requirement to match their alcohol consumption laws. Some provinces allow for the distribution of pot only through government-run shops, but others allow for private outlets.

The federal government, however, will regulate all producers. To date, it has licensed roughly 120 growers. The health department in Canada decreed strict guidelines for packaging and the production of cannabis products.

The producer name, the strain of marijuana and its THC/CBD content must be clearly displayed. Also, the packaging is required to be overly bland so as not to entice the under-19 demographic to take part in weed consumption.

Of the stocks mentioned above, all have some semblance of credibility. Tilray has negotiated agreements with some provinces to supply adult-use marijuana.

Cronos, while it is approved as a Canadian producer, seems the least investment worthy. It is cash flow negative and relies on some odd fair value accounting of its assets for profits. It certainly is trying to bring levity to the world of pot marketing with its tagline for what it calls a “fun, playful brand, Spinach™”, which it says is focused on offering Farm-To-Bowl™ enjoyment.

But just as Apple (NSDQ: AAPL) often sags after its most anticipated iPhone release, or as dot.com stocks dropped after Y2K failed to produce a gold rush of profits, these stocks might get hit if the legalization date is anti-climatic.

These are momentum stocks. Knowing exactly when they will crack is nearly impossible. As U.S. industrial stocks hit speed bumps due to tariff costs and technology leadership wilts due to privacy concerns, investors are frothing at the mouth for the next big thing.

I do not disagree that the legalization of a highly popular drug in a country as large as Canada is a big thing. However, the flight path is never straight up. I expect some air pockets as investors breath in the new realities of a regulated market.

While volumes skyrocket, will pricing be constrained by government intervention? Will bureaucratic issues delay the exponential growth hoped for by investors?

I’ll be watching to see how these stocks act today. It might be a case of sell on the news, but it might just fan the flames of momentum for these stocks. It’s too tight a call for me, but my colleague Jim Fink loves volatility. His Velocity Trader service seeks to deliver reliable profits whether stocks go sky-high or up in smoke.

Worried about a market crash? Well, Jim has developed a proprietary trading system that works just as well in bull and bear markets, in good economic times or bad. That means you don’t have to second-guess the movement of the stock market or the economy.

In his capacity as chief investment strategist of Velocity Trader, Jim is making a “bet” that his system can deliver 24 triple digit winning trades over the next 12 months. If not, he’ll cut you a check for $1,950!

Want to learn more? Click here for the details.