Will Volcanoes Power the World?

I wrote this column in Iceland, where I recently traveled on a working vacation. While in Iceland I met with an innovative energy producer whose technology could help mitigate carbon dioxide emissions. I witnessed a fascinating aspect of the world’s changing energy future, with possible money-making opportunities for investors.

Iceland has an interesting energy profile. While the transportation sector is almost entirely dependent upon fossil fuels, Iceland obtains nearly all of its electricity from renewable energy. Iceland’s glacial rivers contribute about 70% of its electricity via hydropower and the country’s ~200 volcanoes enable geothermal to make up most of the rest.

Consequently, while U.S. utilities burn fossil fuels for most of our power, Iceland’s utilities produce nearly no carbon dioxide emissions. As an aside, while Iceland gets a lot of favorable press for its geothermal energy, the U.S. is — and has always been — the world’s leading geothermal power producer. But we use so much energy that it makes up a small portion of our power consumption.

While I was in Iceland, the latest Intergovernmental Panel on Climate Change (IPCC) report was released. It’s a sober assessment of where the world is headed.

In a nutshell, the report says that “Limiting global warming to 1.5°C would require rapid, far-reaching and unprecedented changes in all aspects of society.” The probability of that happening is close to zero.

A recent story I wrote for Forbes magazine — Fuel From Thin Air — highlights efforts to do the latter. These efforts are mostly at an experimental stage, and their significance is regularly overstated.

But some companies are using carbon dioxide that would otherwise be emitted to the atmosphere. That is the case with the company I met with in Iceland. Carbon Recycling International (CRI) utilizes electricity and carbon dioxide emissions from the country’s geothermal plants to produce methanol, which they produce and sell into the European fuel market. Their product is trademarked as Vulcanol. (They face an uphill battle in marketing their product in the U.S. due to resistance from the corn ethanol lobby.)

I met with Benedikt Stefánsson and Ómar Sigurbjörnsson from CRI to learn more about the company’s technology. Here is how it works.

Geothermal steam is used to produce electricity. As the process unfolds, the water vapor condenses into liquid water. The steam contains about 2% carbon dioxide, but after the water has been removed the uncondensed gas is around 90% carbon dioxide. That carbon dioxide might otherwise be vented into the atmosphere.

Carbon dioxide can be converted into a wide variety of products, but that requires two ingredients. One is energy. Carbon dioxide is a stable, low-energy molecule, with carbon-oxygen bonds that require energy to break.

But hydrogen also is needed. Most of the world’s hydrogen is produced from natural gas, but it can also be produced by passing electricity through water. This process is called electrolysis and it breaks water down into its constituent elements, hydrogen and oxygen.

The laws of thermodynamics necessarily require that more energy is input into the process than is obtained in the form of hydrogen, but there are circumstances that can render the process economically viable.

To be sure, if the methanol is going into the fuel market, that carbon dioxide will still eventually be produced. That is true, but because the carbon dioxide is recycled prior to being vented it would lower the net emissions from burning the fuel.

However, if the methanol is instead used in the plastics industry, the carbon dioxide could be sequestered for a much longer period.

The key to the process is cheap power. I was told that about 70% of the cost of production in a commercial plant would be determined by the cost of power. We can do a quick bit of math to determine the price of power needed to make this process work.

One megawatt-hour (MWh) of electricity is equivalent to 3.4 million British thermal units (Btu). The efficiency of the process of electricity to fuel is about 50%. One gallon of methanol contains 56,800 Btu, so 1 MWh could produce about 30 gallons of methanol.

The current listed methanol price from Methanex (NSDQ: MEOH), the world’s largest producer of methanol and an investor in CRI, is about $1.50/gallon. Thus, 1 MWh of electricity could produce about $45 worth of methanol. If energy is 70% of the overall cost, then the break-even cost for power would need to be less than around 70% of $45, or $31.50/MWh (in the absence of incentives).

The levelized cost of energy (LCOE) for geothermal is about $50/MWh, according to the Energy Information Administration. Solar photovoltaic (PV) power is projected to approach that level in a few years, and wind power costs are projected to fall to $23/MWh in some locations by 2025.

However, even today there are times that countries like Germany and states like California produce so much excess power that the price drops below zero. In such cases, that excess power could be dumped into hydrogen production and storage, the primary energy consumer in such a plant.

Further, these economics assume no value at all on reducing greenhouse gas emissions. If we place a value on the fact that this fuel has a lower emissions profile, which is why we provide preferential treatment in the U.S. to biofuels, then the economics improve. If, for example, methanol was provided similar treatment to cellulosic ethanol for its greenhouse gas emission abatement, it would more than double the value of the methanol produced from each MWh of power.

An important note here about this process is that it isn’t just theoretical, and it doesn’t merely exist at the laboratory scale.

CRI has an operating demonstration plant with a capacity of about 4,000 metric tons of methanol per year. This plant is located next to the Svartsengi Power Station (and Iceland’s famed Blue Lagoon), which produces 150 MW of thermal energy for the district heating and up to 75 MW for electricity power. I visited both the CRI methanol plant and the Svartsengi Power Station during my trip. The power plant provides both electricity and a carbon dioxide source for CRI’s methanol plant. 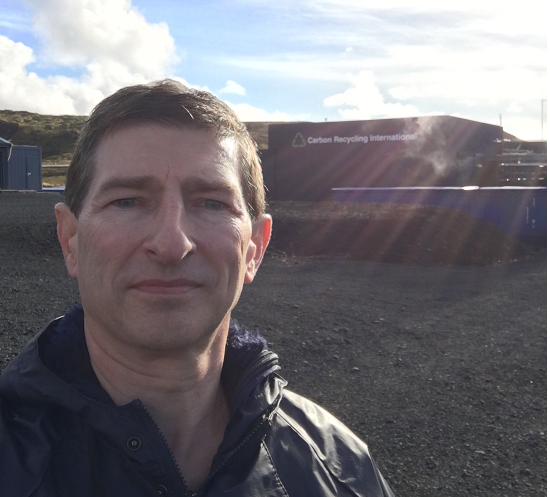 The CRI process could work in any location with cheap power and a source of carbon dioxide. If there are available incentives for producing renewable fuel (as is the case in many countries), the process would be viable in even more locations.

The fuel market for methanol is growing rapidly, and this is exactly the kind of technology that the world needs to help combat the rising tide of carbon dioxide emissions. I will definitely keep a close eye on this process as it may present a future investment opportunity.

Investors need to stay abreast of breakthrough technologies such as the ones that I’ve just described. One analyst who pinpoints profitable breakthroughs ahead of the investment herd is Jim Fink, chief investment strategist of Velocity Trader.

My colleague Jim Fink has developed a proprietary trading system that works just as well in bull and bear markets, in good economic times or bad. That means you don’t have to second-guess the movement of the stock market or the economy. He’s making a “bet” that his system can deliver 24 triple digit winning trades over the next 12 months. If not, he’ll cut you a check for $1,950!