Marijuana is no longer a touchstone of the culture wars, nor merely a punchline from a hackneyed Cheech & Chong sketch. Marijuana is a multi-billion-dollar business that’s been growing by double-digit rates every year. Recreational and medicinal uses are booming, with the greatest opportunities in biotechnology.

In this issue of Investing Daily, you’ll learn:

Let’s get into the analysis! 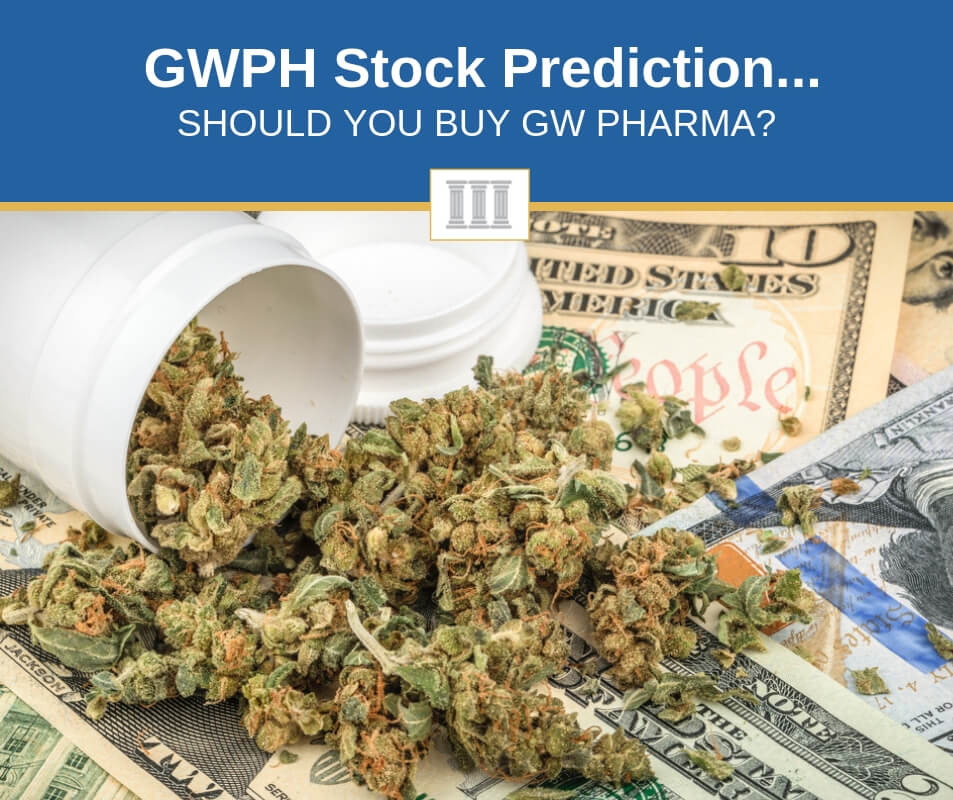 With a market valuation of $4.2 billion, G.W. Pharmaceuticals is one of the very few “weed companies” that isn’t a micro-cap, penny stock.

GW Pharmaceuticals also offers Epidiolex, which treats rare and resistant forms of pediatric epilepsy. The company has been marketing the breakthrough drug in more than 20 countries outside of the U.S., through partnerships with Bayer (OTC: BAYRY) and Novartis (NYSE: NVS).

Epidiolex received the stamp of approval from the U.S. Food and Drug Administration in June 2018. Now that it’s available in both the U.S and overseas, this drug is a potential blockbuster.

How Has GW Pharmaceuticals Performed?

What Is GW Pharmaceuticals Stock History?

Whenever one of the company’s new drugs is approved or shows progress in clinical trials, the stock has (predictably) popped higher. Conversely, GWPH has demonstrated the same sensitivity to headline risk, such as adverse regulatory news, as its peers.

The following three marijuana stocks are salient competitors to GW Pharmaceuticals. Keep in mind, any one of these small-caps would make an attractive takeover target for deep-pocketed GWPH.

With a market cap of $294 million, this biotech focuses on genetic engineering and plant breeding and is developing a new strain of hemp with zero THC, the main psychoactive compound found in cannabis (the compound that produces the “high” that’s keeping marijuana illegal on a federal basis in the United States).

The low-nicotine variety has proven effective in helping smokers kick the habit. At present, 22nd Century is the only company in the world capable of producing tobacco cigarettes at this extremely low level of nicotine, without having to use potentially harmful artificial extraction or chemical processes.

INSYS has been racing GW Pharmaceuticals when it comes to pediatric epilepsy treatments. But this biotech (market cap: $564 million) also has other products in its pipeline that could boost its shares exponentially when they receive approval.

The company is developing cannabis-derived drugs for easing opioid dependence and moderate-to-severe pain. But it has already received approval for Dronabinol, an orally delivered solution that eases nausea and vomiting associated with chemotherapy and AIDS, as well as eating disorders.

Zynerba is developing transdermal synthetic cannabinoid treatments for both pediatric and adult epilepsies, which puts the company in direct competition with GW Pharmaceuticals.

With a market cap of $91.6 million, Zynerba is considerably smaller than either GWPH, XXII or INSY, but that means ZYNE could still witness the explosive growth that the bigger firms have already seen.

However, because it’s smaller and lags the other three companies in the FDA approval process, Zynerba is the riskiest of the quartet.

Will GW Pharmaceuticals Go Up In 2019 (Should You Buy)?

One of the surest ways to make money over the long haul is to tap into a macrotrend that’s virtually unstoppable. That’s precisely what GW Pharmaceuticals has done.

The decades-long propaganda war on the cannabis plant produced generations of Americans who grew up convinced that marijuana was the “devil’s weed” only used by society’s misfits and criminals. That’s all changing.

As marijuana evolves from an underground vice to mainstream capitalism, a plethora of entrepreneurs are cashing in, not only by growing and selling pot but by creating branded edibles, “marijuana tourism,” vaping parlors, paraphernalia, shops, seeds, fertilizers, trade shows — you name it.

Let’s examine the political revolution that has fueled the rise of canna-business.

Canada has left it to the provinces and municipalities to determine parameters, such as where cannabis can be bought and consumed.

Analysts expect demand for marijuana to surge in Canada, creating an acute shortage. Scarcity of weed should be manna for marijuana investors.

Canada’s approach toward marijuana differs from that of its southern neighbor.

The turning point occurred in 1996, when California voters agreed to allow patients and their caregivers to possess and cultivate marijuana for therapeutic purposes. Known as the California Compassionate Use Act, Proposition 215 created the country’s first open marijuana market. Prop. 215 spawned a flurry of state legalization laws, both medical and recreational, that have made possible a new industry.

In the U.S. to date, 30 states and the District of Columbia have legalized marijuana to some degree. 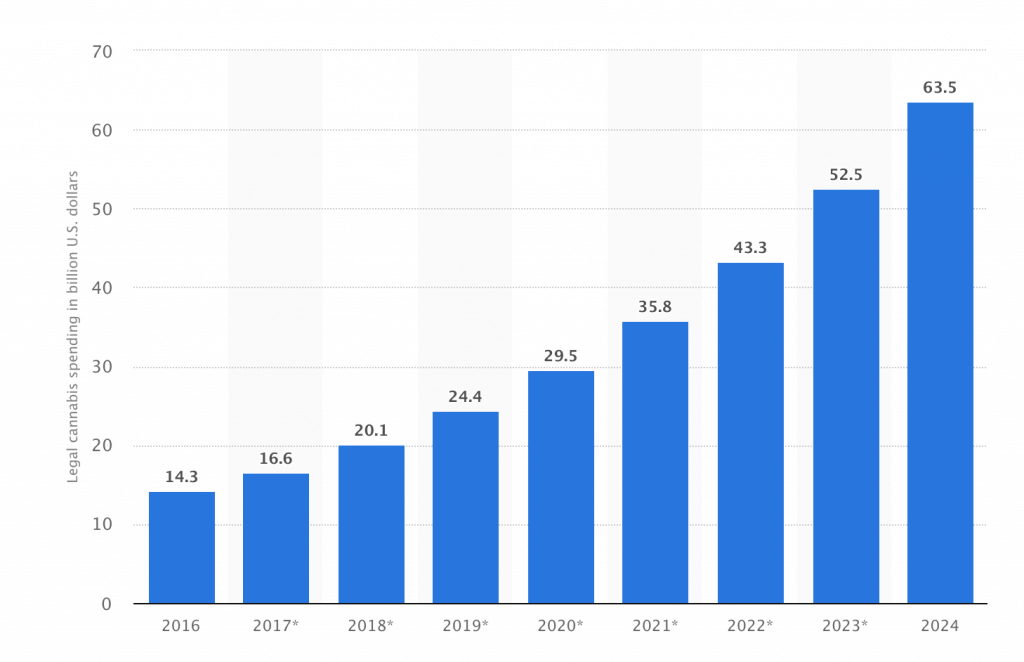 Arcview Market Research estimates that the recreational marijuana market will account for nearly 70% of that global spending by 2024, with medicinal treatments taking up the rest.

Over the long haul, the purveyors of recreational and medicinal marijuana offer the potential for outsized gains.

Just a few years ago, if someone had told you that it was possible to get rich by investing in marijuana, you probably would have laughed and asked what they were smoking. But the marijuana business is no laughing matter.

This video depicts the powerful industry tailwinds that benefit GWPH:

GWPH also enjoys the benefit of being a mid-cap stock. It’s small enough to offer outsized growth, but large enough to provide ballast. That puts this company in the valuation “sweet spot.”

GWPH’s total debt-t-equity ratio is a manageable 3.37, which is low compared to most of its peers which typically struggle with high debt.

On a trailing 12-month (TTM) basis, the company’s price-to-sales ratio is 259, which is a bit pricey compared to its peers but warranted considering its growth prospects.

Will GW Pharmaceuticals Go Down In 2019 (Should You Sell)?

The election of Donald Trump and his appointment of the notoriously anti-pot Jeff Sessions as attorney general have frightened away some investors who could be reaping marijuana stock profits.

While the majority of Americans now favors the widespread legalization of cannabis, it appears that the federal government’s stance won’t change in the immediate future.

Indeed, Jeff Sessions once quipped that he thought members of the KKK were “okay” until he found out that some of them were pot smokers.

Jeff Sessions, the highest law enforcement official in the land, despises marijuana to the point where his remarks about pot resemble a trailer for the camp classic Reefer Madness.

Investors with low tolerance for risk will have better luck with more established players in the cannabis-for-medical-purposes sphere.

Marijuana investors should be prepared to shoulder the inevitable volatility that afflicts the industry.

Many of the biotechs working in the marijuana industry use synthetic cannabinoids, allowing them to skirt around the legalities of grown marijuana. This is paying off big-time for GW Pharmaceuticals.

Even as the overall bull market wavers, GW Pharmaceuticals remains a momentum stock. The average analyst expectation is for GWPH’s year-over-year earnings growth to reach 42% in 2019.

The Wall Street consensus has set a one-year share price gain of more than 35% for GW Pharmaceuticals. Investors are likely to witness additional catalysts, notably regulatory approvals, that will boost GWPH shares well into 2020.