A few weeks ago, we looked at Sears’ (delisted) downfall as an example of an industry leader’s failure to adequately adapt and evolve to stay relevant. In the always-changing tech world, the need to change can be even faster.

Apple (NSDQ: AAPL) surpassed the $1 trillion market-capitalization milestone this summer. At more than 4%, AAPL is the largest component of the S&P 500.

That’s impressive, but back in the 1980s, there was another tech company that held even more sway over the market index.

A Champion of the Past

Throughout the 1980s, International Business Machines (NYSE: IBM) was the largest company in the index for most years. At its peak, it was more than 6% of S&P. As recently as the late 1990s, IBM was still a top-10 S&P 500 component.

Today, however, IBM is barely in the top-50.

IBM was the first true multinational computer company and dominated the computing market for a long time. Over the years, it has reinvented itself from a mainframe business to a leader in personal computers (PCs), and then to IT consulting.

However, by the early 1990s, Microsoft’s (NSDQ: MSFT) Windows emerged as the clear operating system that consumers and application developers preferred over IBM’s OS/2 (ironically, Microsoft co-developed OS/2 with IBM). Additionally, demand for mainframes was dwindling and on the PC front, other companies offered cheaper versions. IBM was slow to adapt.

The Good and the Bad

By 1993, IBM was close to bankruptcy. Lou Gerstner took over as CEO and made some huge changes within the company and its corporate culture, including ordering the first layoffs in IBM’s history. Gerstner is widely credited with saving the company. Under his watch, IBM’s market cap grew by more than five-fold.

But Gerstner also laid groundwork for IBM’s struggles today. He had saved the company by making it more like a modern corporation and focusing on the bottom line, supporting the stock price, and paying big rewards to the execs.

His successor Sam Palmisano took things a step further. To attract investors, Palmisano set a plan called Roadmap 2010 in motion to achieve earnings per share (EPS) of $10 by 2010. The target was met and Roadmap 2015 was set. The goal is to double EPS between 2010 and 2015.

The problem is that revenue growth wasn’t what drove the improvements in earnings. The company struggled to innovate, and tried to grow by buying out smaller companies. IBM really doesn’t have sustainable competitive advantages in any major tech areas.

Without strong sales growth, IBM had to increase profits by cutting costs. This meant laying off workers and shifting to cheaper vendors, but it’s not a sustainable way to keep increasing profits. For a while, the strategy did boost the share price, but there’s only so much fat you can cut before affecting important muscles and bones. Plus, it’s terrible for staff morale and it won’t attract top talent to work for the company.

Until the final quarter last year, IBM hadn’t had a single quarter of revenue growth since 2012. And even then, the streak was broken because of a cyclical replacement in mainframe computers. 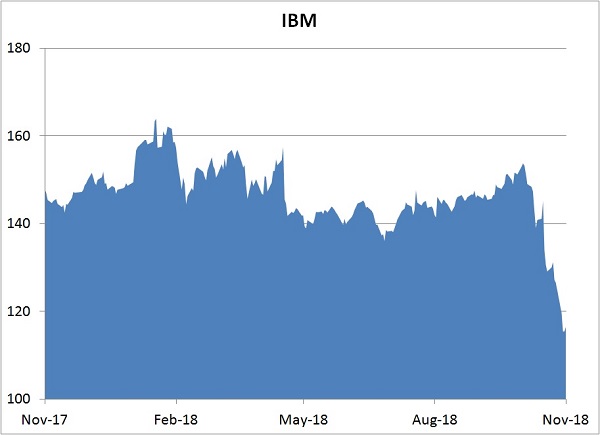 Probably recognizing the need to shake things up, in the last week of October IBM agreed to buy Red Hat (NYSE: RHT) for $34 billion.

This is the largest software deal ever and IBM paid a dear 60% premium. IBM will pay with a mix of cash and debt, and it will suspend stock buybacks for fiscal 2020 and 2021.

Paying for a Chance to Grow

There’s no doubt that IBM hopes the deal will boost growth. By adding Red Hat, IBM is doubling down on an area called “hybrid cloud.”

Hybrid cloud is a fancy term for storing data on premises, on private cloud and public clouds and ensuring smooth operations across the platforms. Basically, more and more companies are transitioning to the cloud, and IBM has to adapt. To quickly increase capabilities in that area, Red Hat was probably a top choice. The hefty $34 billion price tag suggests that there were probably other bidders in play.

The deal will help IBM’s positioning in cloud, but whether it gives the tech giant an enough growth boost to justify the price remains to be seen.

IBM is nowhere near the problems that sank Sears, but it, too, is an example of a once innovative company that failed to keep pace with competitors after spending years at the top. The Red Hat acquisition suggests that the company really is desperate for growth. Big acquisitions like this don’t always work out, but to try to recover some of its former glory, IBM had to give this a shot.