Does Apple Face a Wormy Future?

Apple (NSDQ: AAPL) delivered some bitter news to the market last week. After reporting a quarter that beat analysts’ estimates for revenue and earnings, it provided future quarterly guidance a bit softer than hoped.

By itself, the dampened outlook should not inspire too much worry. Apple is a tech sector bellwether and as such, analysts are known for nitpicking each data point in the company’s earnings releases. And besides, Apple management are a cautious bunch.

It wouldn’t be the first time the notorious estimate beater tried to dampen investor enthusiasm. Early in 2018, Apple issued guidance below analysts’ estimates due to a pause in iPhone shipments following a record quarter.

But this time, Apple management did something I find profoundly bearish: they announced that the company would stop including unit data in future earnings announcements. I was taken aback by this announcement.

“As demonstrated by our financial performance in recent years, the number of units sold in any 90-day period is not necessarily representative of the underlying strength of our business. Furthermore, our unit of sale is less relevant for us today than it was in the past given the breadth of our portfolio and the wider sales price dispersion within any given product line.”

For as long as I’ve been following stocks (some 28 plus years), no company ever stops disclosing a data point that is bullish.

If you’re looking for a red flag with Apple, this decision is the mother of red flags.

Indeed, for the quarter ended September, Apple reported a slight drop in total units sold. Units are broken out into iPhones, Macs, and iPads. Revenue is split into similar buckets, allowing analysts to compare average selling prices (ASPs), a critical metric to gauge the company’s success in enticing consumers to trade up to its newest, most expensive gear. 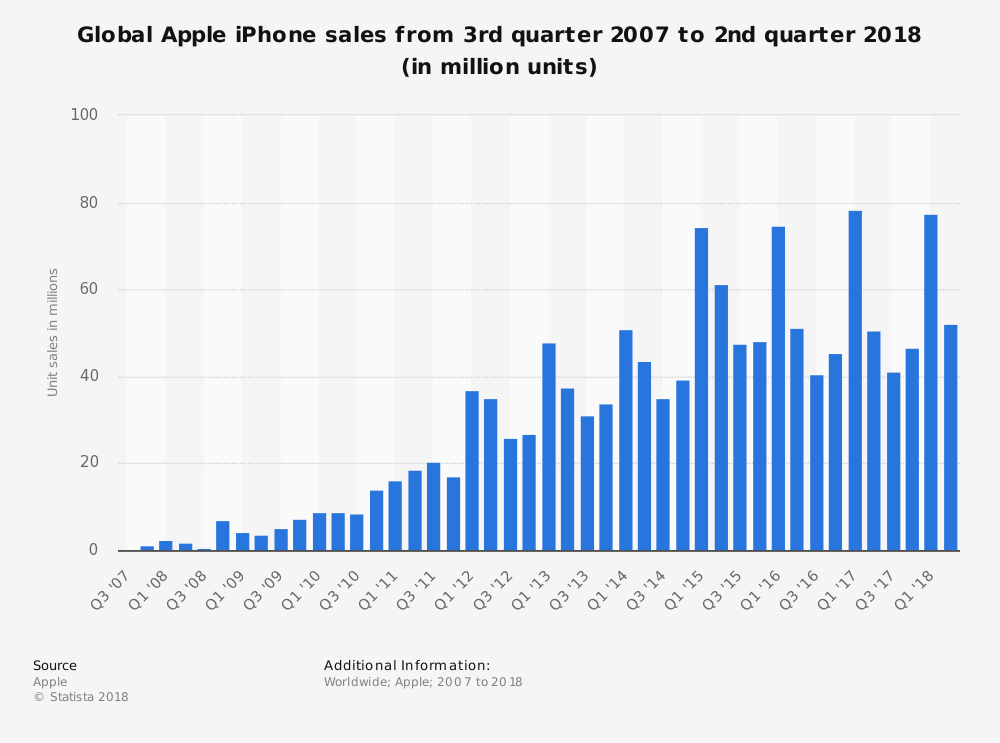 The company sold just slightly more iPhones than it did in the year-ago quarter. Mac units fell 2% and iPad units fell 4%. This flatness shouldn’t be entirely shocking. The law of large numbers eventually weighs down every company in the world. I’ve seen heaps of analysis (some from almost a decade ago) attempting to illustrate that Apple could not sell ONE MORE iPhone.

After a vast majority of consumers living in first world countries seemed to own an iPhone, a rational person would guess that sales would slow. Yet Apple defied the most intelligent skeptic by selling a higher number of iPhone units at higher and higher prices.

The company seemed to hit a wall in pricing with the introduction of the iPhone X which puts a $1,100 dent in consumer wallets.

Some analysts are unfazed by the decision to eliminate this disclosure. One pointed out that iPhone sales have been “virtually flat” for years, but Apple’s revenue, earnings and, most importantly, its stock, all rose to record levels.

While this is partly true, prices of iPhones have marched higher, providing the company with growing iPhone revenue. Despite “flattish” units, particularly in iPhones, revenue from all devices contribute the same percent to total revenue as they did the year before. Services and accessories are not growing as a percent of total revenue.

I don’t think I’ve ever seen a manufacturing company that does not celebrate higher unit production. After all, the cost of a factory is enormous. The company must spread the cost of the entire factory over the number of units produced within it. Even if Apple subs its manufacturing out to other companies, these economics impact their cost of goods.

If a $100 million factory makes just 20 “units,” the manufacturing cost per unit is $5 million each. When that factory cranks out 2,000 units, the cost per unit falls precipitously to $50. Apple’s been increasing unit production to such high levels that it is likely operating its factories at super high utilization levels.

If production begins to fall, the reversal of that operating leverage is an ugly thing. Of course, many variable costs go into production that can be avoided if production slows, but the most significant expense of the factory remains regardless of the size of the production run.

I’m not saying Apple will collapse overnight, but this new worm in the story might indicate a sour future for the stock.

My colleague Jim Fink, chief investment strategist of Options for Income, is an expert at squeezing profits out of trades when a stock might be stuck in neutral. This new presentation walks you through one of Jim’s live trades, and demonstrates how you can collect $1,732.05 in under two minutes! Watch it now.