Netflix (NASDAQ: NFLX) has recorded a mind-boggling three-digit return of 565% over the past 5 years. The future looks bright too if the company can continue to create compelling content whilst generating a positive cash flow.

Will Netflix stock continue its run in 2019? Or will it get negatively affected by the huge expenses the company incurs in content creation? Let us look at both the aspects in-depth.

Netflix is one of the largest internet entertainment services in the world. It has over 130 million memberships in more than 190 countries.

Netflix streams TV series, feature films, and documentaries in different genres and languages that can be watched by the viewers anytime, anywhere. The company launched its streaming service in 2007 and has a market value of over $150 billion.

The company has three reportable segments including domestic streaming, international streaming, and domestic DVD. The source of revenues for the company is the monthly membership fees for the services.

How Has Netflix Stock Performed?

The stock has Netflix has performed beyond all expectations since 2007. Since then the stock has risen more than 100-fold, making it one of the best-performing stocks on Wall Street.

It hasn’t been all upward movement. Netflix stock fell for the most part in 2011 and 2012. However, it regained the momentum in 2013 and has followed an upward trajectory ever since. In most instances, the stock performance of Netflix has been affected by the global markets and its own financial performance.

The stock of Netflix rallied up by 60% in 2017. This growth was significantly higher the S&P 500, which grew by only 21%. It was 2017 that the domestic customer base of Netflix grew largely. The number of paying subscribers crossed the 50 million mark, with about 3.34 million subscribers added in the first nine months of 2017 itself.

At the same time, Netflix also increased its average fee per subscriber without affecting the number of subscribers. The company planned to increase membership fees steadily and let it not affect member growth.

For the financial year 2018, the stock of Netflix nearly doubled itself in the first half of 2018. The stock prices increased by 104% from January to June 2018.

As a result, the revenue guidance of the third quarter of 2018 was reduced and the stock price fell by 14%.

Nonetheless, the stock of Netflix recovered and went up soon after the release of the earnings report for the third quarter of 2018. The company reported solid 3Q 2018 results.

The number of new subscribers went up to 6.96 million in the third quarter of 2018, compared to the expectations of 5 million new additions. The profit reported was $403 million, and the sales jumped by 34% to $4 billion. The international streaming revenues increased by 49%, and the domestic streaming revenues grew by 25%.

Who Are the Rivals?

The market of internet entertainment service is shared majorly by Netflix and Amazon in the United States. Both the providers have contributed to the so-called ‘cord-cutting’, wherein the consumers let go of the traditional cable services and switched to internet streaming services.

Amazon Prime beats Netflix at being affordable at just $12 per month. Also, Netflix has a very high programming cost, estimating to spend about $8 billion on content in 2018. However, overall, the stock of Netflix has been consistently performing better than Amazon.

The analysts are highly bullish towards the stock of Netflix. They are expecting a price target of $470 per share in 2019. Netflix has reported strong financials in the recent past quarters and there are significant expectations of growth in earnings in the coming quarters.

Therefore, the stock of Netflix is expected to continue its upward movement and is expected to be trading at 137 times trailing earnings and about 84 times of the next year’s earnings.

So, though expensive on a fundamental basis, Netflix is a very good long-term investment. The company has strong fundamentals and is well-positioned to grow well into the future.

Along with considering the positives of the stock and the company, it is critical to consider the drawbacks as well to get a clearer picture of the stock.

The most significant drawback of Netflix is its programming cost. The company has spent billions of dollars on its content and is planning to continue doing so. Netflix has already spent $2.1 billion on content creation in 2018, and the expenditure is forecasted to go up to $4 billion.

The idea of the company is to spend a huge amount of money on the creation of high-quality content now and reap the benefits later in the form of residual membership fees.

However, Netflix plans to hold the negative cash flow steady in 2018 and 2019 and is almost at the threshold to turn into a positive cash flow. 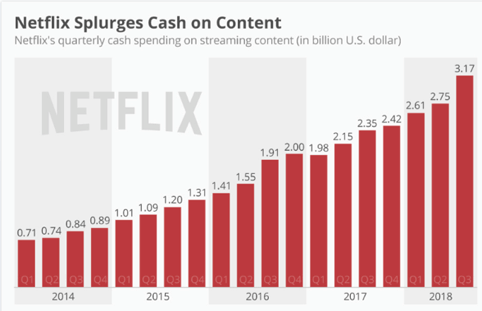 Overall Netflix Forecast and Prediction for 2019

The stock of Netflix has almost always shown a positive trend and the trend is expected to continue into the future.

The company has a strong, ever-increasing user base. The number of subscriptions, and thus the revenue, is increasing steadily quarter on quarter. The third quarter of 2018 boasted of earnings of 89 cents per share, beating the estimates of 68 cents per share.

The concerns seem to be the high content creation cost and the increasing competition in the market. However, the company is on the path to stabilizing its negative cash flow and looks poised to transition to positive cash flow quite soon in the future.

In terms of competition, Netflix is striving hard to create high-quality content. It is delivering top-class content and is becoming the landing pad for numerous content creators. The company is investing in the future and still has a large market left to capture.

As a recommendation, Netflix is a BUY. The stock is still undervalued and has a strong potential to go up owing to the subscriber growth. Due to the growth in the number of users, the financial results are expected to be well above the estimates that will drive up the stock performance as well.