Our Celgene Stock Prediction In 2019 (Buy or Sell?)

You’ve probably heard of FANG stocks, a group of four large-cap tech stocks that have made a big run in recent years.

Flash back to about five years ago and these guys were the toast of the town for investors. They made a lot of money for shareholders.

Since the calendar flipped to 2015, though, it’s been a different story. As the chart shows, Amgen is the only stock of the four that’s been in the green: 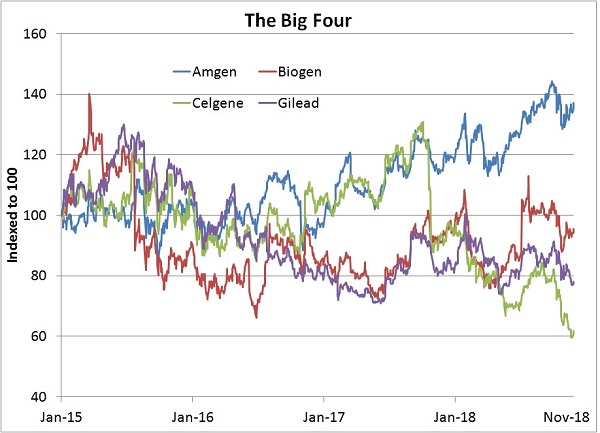 Today we take a look at the worst performer in the group: Celgene.

Since the beginning of 2015, the stock is down about 40%. Is there a rebound in its future?

Because its stock has declined, by market cap of Celgene is no longer as big as it once was. However, at almost $50 billion, it’s still one of the largest biotech companies in the world.

The drug accounts for about two-thirds of Celgene’s overall revenue, so it’s obviously a big deal.

Besides Revlimid, Celgene has three other drugs expected to generate $1 billion or more in 2018 sales, but none of them come close to Revlimid.

The three drugs are Abraxane (breast, lung, and pancreatic cancers); Pomalyst (multiple myeloma that don’t respond to other treatments, including Revlimid); and Otezla (plaque psoriasis).

How Has Celgene Stock Performed?

Celgene is one of the great success stories in biotechnology. Most biotech startups never reach the same heights. The U.S. Food and Drug Administration (FDA) approval of Revlimid in 2005 was the breakthrough.

By 2007, Celgene had surpassed $1 billion in sales for the first time.

Since then, the stock has fallen more than 50%. The market now treats Celgene as a no-growth stock that pays no dividend.

The year 2017 was fine for Celgene shareholders until the fourth quarter. The share price was only a few dollars from $150 in the early days of October 2017. But by the end of that month, the price had fallen to $100.

A drug in Phase-3 studies for Crohn’s Disease failed. The drug was viewed as one of the most promising products in Celgene’s pipeline. Projections had called for peak sales of $2 billion for this drug. Now there’s nada.

That disappointment, plus mediocre quarterly results, hammered the stock. 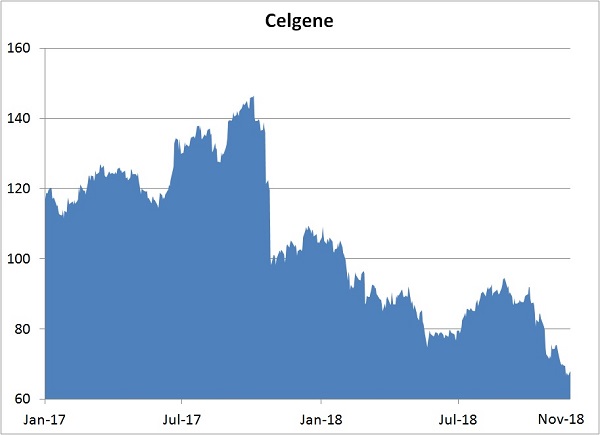 The year 2018 has been even worse. In March, the FDA rejected Celgene’s application for ozanimod, a drug to treat multiple sclerosis (MS), because the application was missing certain data. The setback means that approval would probably be delayed by a year or more.

Worse than the delay, the snafu raised questions about the competence of Celgene’s management.

A $9 billion purchase of Juno Therapeutics received a mixed reaction.

To make matters worse, Celgene also cut its revenue forecast for Otezla due to slower-than-expected sales growth so far.

Who Are Celgene’s Rivals?

A combination of Velcade, Revlimid, and dexamethasone is currently the most popular frontline treatment for the disease. In May 2018, the FDA approved Darzalex in combination with Velcade, melphalan, and prednisone for treatment of newly-diagnosed MM patients.

The second study is still quite early but if successful, that would mean a new combo without Revlimid.

Eli Lilly is even older than Johnson & Johnson. It has been around for more than 140 years.

Today, it’s a company with a market cap of $110 billion and more than 20 drugs (including animal medicine) on the market and a very deep pipeline. Its key areas of focus are diabetes and oncology.

The firm’s Taltz drug is a direct competitor against Celgene’s Otezla. In the latest reported quarter, Otezla beat Taltz $432 million to $264 million.

Eli Lilly has several cancer drugs that target the same cancers as Celgene’s chemo drug Abraxane, but due to the complexity of cancer and the ways to treat it, there isn’t much direct competition.

Biogen is the leader in MS treatments, with multiple drugs that take on the debilitating disease. Its star drug Tecfidera generates more than $4 billion in annual sales. In addition, Avonex and Tysabri both generate around $2 billion in sales a year.

Tecfidera and Tysabri both have safety concerns regarding a potential deadly side effect. Prolonged use increases the chance of developing a life-threatening brain infection.

Celgene’s ozanimod, expected to be eventually approved by the FDA, will compete with Biogen’s MS drugs as well as MS drugs from companies like Novartis (NYSE: NVS) and Sanofi (NYSE: SNY).

After a disastrous 2018, CELG is trading at a 12-month forward price-to-earnings ratio (FPE) of under 7. The market acts as though the company is going to fall over a growth cliff.

Even though Celgene had lowered its 2020 outlook in 2017, after the 2018 third quarter, it slightly boosted its guidance for 2018. Otezla sales were increased to $1.6 billion, so the uptake trajectory improved in the third quarter.

The late-stage pipeline problems noted above are definitely disappointing, but ozanimod is merely delayed, not dead. Approval should come sometime in 2019. 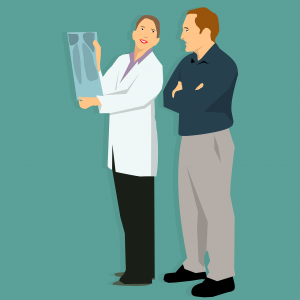 Ozanimod’s safety profile is attractive and suggests it should take some market share away from incumbents. Peak sales of at least $1 billion is likely. Some clarity on when Celgene may be able to resubmit an application for FDA approval should help the share price.

There will probably be limited generic Revlimid on the market starting in 2022, but that’s more than three years away and sales continues to grow. With Revlimid and Pomalyst, Celgene has a stranglehold on the MM market, which faces growing demand.

Including ozanimod, Celgene is expected to have five FDA filings and/or launches over the next two years, boosting chances for additional future revenue.

Even though Celgene has put a few new drugs on the market in recent years, Revlimid continues to be a very important product for the company. Generic competition will likely be available by 2022, and it’s imperative that Celgene continues to bring new products to market.

That’s the problem with companies with top-heavy product portfolios. If something happens to the best-selling product, overall revenues will take a huge hit. 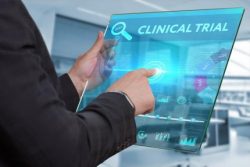 After two major setbacks over the past year or so, it’s fair to question whether more stumbles could be on the way.

For an experienced company like Celgene to submit an incomplete application to the FDA and get rejected is an embarrassment. Ozanimod could be a multi-billion-dollar drug if it ever hit the market, but it’s unclear if the company can really gather all the necessary data to the FDA’s satisfaction in 2019.

There’s been a shuffling of management in 2018, and while the replacements look to be competent veterans, the turnover could signal additional problems under the surface.

Overall Celgene Forecast And Prediction For 2019

CELG has definitely had a rough ride lately, and it is fair to question the company’s ability to execute after the hiccups of the past two years. But this is not a company with a barren pipeline.

The company may not have another mega-blockbuster like Revlimid in its pipeline, but it has several interesting candidates that together should be able to more than offset Revlimid sales loss from generic competition, which won’t happen until 2022 anyway.

You can’t count out the possibility of more missteps in the company’s developmental programs next year, but at the stock’s current beaten-down level, the odds favor a rebound in 2019.

If you’re looking for other exciting growth opportunities, turn to my colleague Jim Pearce, the top analyst at Investing Daily. Jim has just unveiled the most ambitious initiative in the history of investment research. It’s called the Income Millionaire Project.

The goal of this program is simple: Show 1,000 Investing Daily readers how to quickly make $1,000,000 in retirement income… without taking on extraordinary amounts of risk. Want to know more? Click here for the details.