Tariff turmoil is stealing the headlines these days. Not a day goes by without a public company decrying the chaos delivered via tariffs, either those already implemented or those planned for in the near future.

However, there are hints that the expected jump in import costs will not be as severe as expected. Mixed in with splashy news of year-end market volatility and record holiday sales are little-noticed reports of various products receiving exclusions from Chinese tariffs.

These stories, filled with legalese, revealed that almost 1,000 requests received a coveted exemption from the import tax. The winners of these exemptions could see a boost to their bottom lines.

Less than one month ago on December 1, the stock market raced up on news that President Trump and Chinese President Xi agreed to postpone plans of a January 1 increase on tariffs on $200 billion in Chinese goods.

Under the plan, the two sides would discuss hotbed issues like technology and intellectual property protection, cyber theft, and the import and export of services, goods, and agriculture. The latter product category is suffering shrinking exports due to a Chinese tariff on U.S. soybeans, a tax that particularly hits Trump’s base of rural supporters in the Midwest.

Yet one day later, the market fell apart when tweeted reports of a nearing resolution could not be formally confirmed. Uncertainty over tariffs is partly to blame for the market’s recent weakness. Investors hate a murky future. If they knew the exact rate of the tariff, its timing, and its product targets, they could make a calculated bet on how much value a stock should lose (or gain) due to those changes. 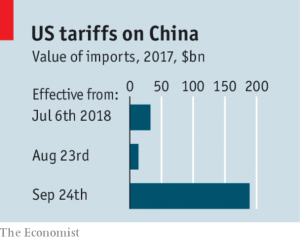 Three rounds of tariffs have already been imposed on Chinese imports. The first two rounds, put into effect in July and August, covered $50 billion worth of products with a 25% tariff.

The third round, which hit in late September, equaled 10% but covered a much broader range of $200 billion of products.  The White House is considering one more tariff in January, this one a biggie: a 25% tariff on the remaining $270 billion of goods traded with China.

More than one-third of companies reporting third-quarter earnings noted tariffs as an item impacting future estimates. Most warned that tariffs either increased the cost of products or raw materials needed for their business or that customers were delaying purchases until they found some certainty on the longevity and level of tariffs.

Yet there are hints that the trade war may be thawing. During Christmas week, the office of the U.S. trade representative granted its first round of tariff exclusions. The office approved 984 requests for exclusions from tariffs covering $34 billion worth of Chinese goods. The 25% tariffs took effect July 6 and the exclusions are retroactive to that date.

Based on the limited detail in the news feeds, it is hard to know exactly what products will enjoy this exclusion. The process for applying for and receiving an exclusion from a tariff is long and arduous. The exclusions announced at the end of December were initially applied for about six months ago.

Many industrial companies have already incorporated price increases to cover the cost of the tariff imports. Most major U.S. retailers, including Macy’s (NYSE: M), Target (NYSE: TGT) and The Gap (NYSE: GPS) warned that they are charging higher prices on certain items impacted by the import tax.

The tariffs apply to products ranging from canned vegetables to wood furniture and sneakers. Anyone remodeling a kitchen has likely noticed a 20% price hike in materials such as cabinets and flooring. The same goes for those looking to buy a new washing machine, where prices are skyrocketing.

However, if a tax on an imported product is reversed or excluded and its end price has already been increased, it is unlikely that companies will actually lower the price. Only certain consumable and perishable products usually see prices rise and fall quickly.

Economists often muse that prices are “stickier” when declining than rising. Particularly during a period of slight inflation, many companies can justify a price increase. Unless they are fighting for market share, they are reluctant to permanently lower prices. They might attempt to spur demand with temporary sales, but an across-the-board, permanent price cut takes much longer.

Indeed, some companies will benefit from higher prices and a lower-than-expected cost of goods. With many stocks trading at rock bottom valuations, my colleagues at the Investing Daily Wealth Society will be hunting for bargains that are poised for an unexpected pop in earnings due to tariff exclusions.