In recent years, global coal consumption growth has slowed. In developed areas such as the U.S. and the European Union, coal consumption has been declining for over a decade. While the world will continue to use coal for decades, its days as a growth industry appear to be behind it.

Likewise, oil appears to be entering its final years of appreciable growth. Oil consumption growth has also declined over the past decade in the U.S. and EU, albeit at a slower pace than coal’s decline. But continued growth of electric vehicles (EVs) will likely bring oil’s global growth to a halt in one to two decades. This month BP (NYSE: BP) released its annual Energy Outlook, and predicted that a 100-fold increase in EV sales will cause oil demand to peak in the 2030s.

But fossil fuel growth isn’t entirely dead. In fact, one segment is forecast to grow robustly over the next three decades: natural gas. Investors who act now can position themselves for long-term profits in this increasingly coveted commodity.

Last month the Energy Information Administration (EIA) released its Annual Energy Outlook (AEO) 2019 with projections to 2050. The purpose of the annual report is to provide long-range energy projections for the U.S. by looking at a number of different cases.

U.S. natural gas consumption and production are expected to increase significantly in almost every case: 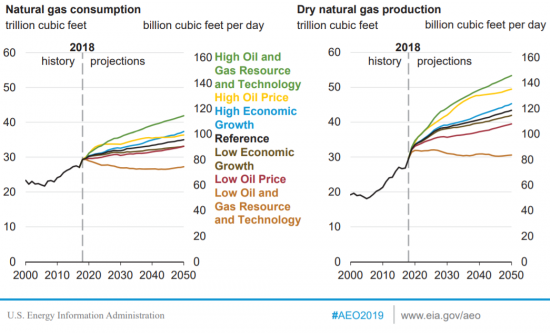 While consumption of coal and oil have declined in the U.S. in recent years, natural gas demand has grown sharply. Consumption by the electric power sector increased by nearly 50% from 2005 to 2016, reaching 27 billion cubic feet per day (Bcpf/d). Industrial demand has increased by 30% as some manufacturing capacity relocated to the U.S. to take advantage of low gas prices. Natural gas exports to Mexico have now exceeded 5 (Bcf/d), equal to about 7% of U.S. daily production.

But future demand growth will likely be driven by liquefied natural gas (LNG) exports. The EIA projects a 5.1% annual growth rate in LNG exports from 2018 to 2050. If that outlook is correct, in 2050 LNG exports would consume an estimated 12% of U.S. natural gas production, which itself is forecast to rise by nearly another 50% between now and 2050. 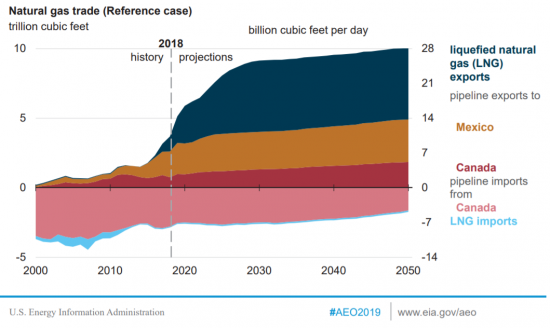 The Winners in Natural Gas Growth

LNG exports have started ramping up, but so far have been dominated by one company: Cheniere Energy (AMEX: LNG) via its master limited partnership Cheniere Energy Partners LP (AMEX: CQP).

According to the U.S. Department of Energy (DOE), since the startup of Cheniere Energy’s Sabine Pass LNG export terminal in February 2016, about 2 trillion cubic feet (Tcf) of domestically-produced LNG have been exported to 34 different countries. Most of that LNG was exported by Cheniere Energy, but the company was joined last year by Dominion Energy (NYSE: D), which opened its Cove Point LNG export terminal.

These developments are just the tip of the iceberg, with more than 50 LNG export projects approved by the DOE. Not all of those projects will be built, and some are of more significance than others. For example, LNG is the core of Cheniere’s business, but won’t move the needle for Dominion Energy.

Likewise, Exxon Mobil’s (NYSE: XOM) and Qatar Petroleum’s announcement this month that they will proceed with construction of the $10 billion Golden Pass LNG export facility on the Texas Gulf Coast won’t substantially impact XOM’s bottom line. But this project would export up to 2.2 Bcf/d of LNG, which is significant to the overall LNG market.

Investors interested in capitalizing on the expected surge of LNG exports would be wise to focus on companies for which LNG will appreciably boost the bottom line. A lower-risk alternative may be to focus on natural gas producers in the Appalachia Region and the Permian Basin, which are expected to feed the monster LNG demand growth that is forecast over the three decades. All of these aforementioned trends should make natural gas the “hottest” fossil fuel investment around.