To borrow a famous phrase from the great American humorist Mark Twain, reports of Walmart’s (NYSE: WMT) demise are premature.

Analysts have repeatedly written Walmart’s obituary, arguing that the legacy retailer is doomed in the face of competition from e-commerce juggernaut Amazon (NSDQ: AMZN). But Walmart has proven surprisingly adaptable.

Walmart has been aggressively ramping up its online presence. By shuttering underperforming brick-and-mortar locations, the company has been able to plow millions of dollars into high-tech fulfillment warehouses and new delivery vehicles.

Walmart remains a retail icon. Founded by Sam Walton in 1962, Walmart is synonymous with bargain prices for the masses. The company’s “Big Box” stores dot the American landscape and the stock is a component of the Dow Jones Industrial Average.

Walmart also is a “Dividend Aristocrat.” But just how safe is WMT’s dividend? Let’s find out. 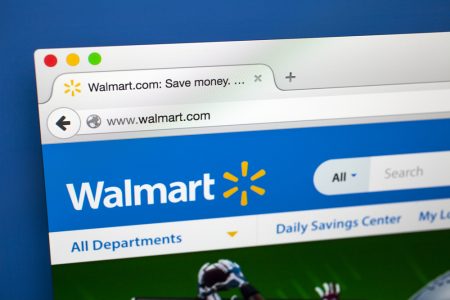 Yes, Walmart is a long-time member of the S&P 500 Dividend Aristocrats and the company made the list again in 2018.

The company also is an aristocrat among retailers. Based in Bentonville, Arkansas, Walmart operates a huge global chain of discount department and grocery stores, as well as Sam’s Club retail warehouses. Walmart boasts 11,277 stores and clubs in 27 countries, operating under 55 different names.

With a market cap of $290.4 billion, Big Box retail chain Walmart has expanded into the online and mobile marketplace to attract bargain-minded shoppers.

Walmart also operates a mobile payment platform, Walmart Pay, which provides discounts and other deals. This app allows customers to pay using bank accounts that are synced up with a Walmart Pay account.

Nervous about mounting risks in the stock market? Investors seeking safety and a reliable stream of income are often drawn to the Dividend Aristocrats, the time-honored gold standard for dividend-generating stocks. This breed of stock also is perfectly suited for retirement portfolios.

A Dividend Aristocrat inherently tends to be a large and stable blue-chip company with a rock-solid balance sheet and ample cash flows. Many of these companies are familiar names that produce well-known consumer brands. Walmart fits the bill on every score.

You don’t have to be an income investor to love dividend-paying stocks. Dividend-payers are time-proven vehicles for long-term wealth building, but they’re also safe harbors in turbulent seas because companies with robust and rising dividends by definition boast the strongest fundamentals.

What Is Walmart’s Dividend?

Dividend payments may seem routine, but they’re not automatically conferred. A corporation’s dividends must be approved by the board of directors every quarter.

A company’s chief financial officer or comptroller recommends a dividend to the board of directors. The board reviews the strength of the company’s financial statements and considers whether approval of a dividend is prudent.

Dividends that grew in the past aren’t always safe today.

What Is Walmart’s Dividend History?

Walmart has increased its annual cash dividend every year since first declaring a $0.05 per share annual dividend in March 1974. The annual dividend growth rate has been particularly strong in recent years (see chart). 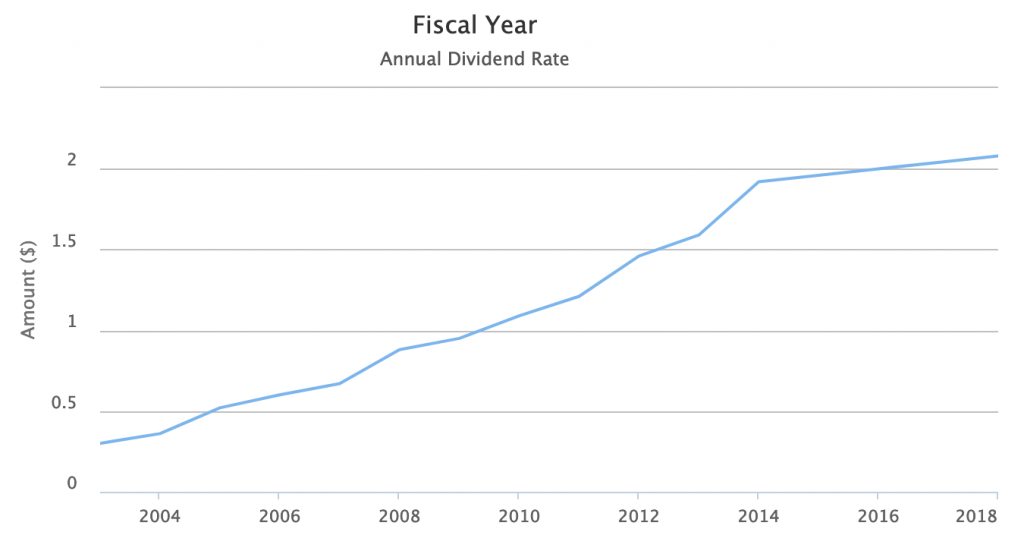 What Is Walmart’s Dividend Yield?

The dividend yield is the sum of a company’s annual dividends per share, divided by the current price per share.

Read This Story: What is a Dividend? (A Simple Guide)

When Is Walmart’s Dividend Payout Date(s)?

Will Walmart’s Dividend Increase In 2019?

There’s a good chance that Walmart’s dividend will increase. The payout ratio is a healthy 44.1% and the stock has racked up 44 straight years of dividend growth.

Defying the pessimistic expectations of Wall Street and business analysts, Walmart has excelled at adapting to the online shopping revolution.

In fact, the company has reinvented itself as an e-commerce giant in its own right.

Walmart has taken a swipe at Amazon with its revamped delivery service, known as ShippingPass. Much like Amazon’s Prime, customers sign up for a subscription for the service, which promises two-day delivery on many items.

Amazon is even boldly going into territory e-commerce retailers had feared to go before, such as apparel and groceries.

But Walmart has gotten aggressive in its online efforts. The company has revamped its online subscription-based delivery service, which annually costs half of what Amazon Prime members pay, and it’s devoted billions of dollars to upgrading its warehouse and logistics network.

Walmart also is taking the fight to home furnishing giants such as Bed Bath & Beyond (NSDQ: BBBY). This year, Walmart expanded its furniture offerings to provide more upscale choices, a further blow to BBBY which has been struggling.

Market research firm eMarketer projects that total e-commerce sales in the U.S. will reach $600.6 billion in 2019, a year-over-year increase of 15%. The research firm reports that Walmart last year captured about 4% of all e-commerce sales in the U.S. and 0.4% of the total U.S. retail market. Walmart is now the third largest online retailer, behind Amazon and eBay (NSDQ: EBAY).

That’s highly unlikely. Walmart’s free cash flow in 2018 reached a robust $18.2 billion and the company’s debt is manageable. For the reasons cited above, revenue and earnings are growing.

This video provides a “deep dive” into the safety of Walmart’s dividend:

Walmart’s purchase in 2016 of Chinese e-commerce platform Jet.com for $3.3 billion is expediting the company’s expansion into emerging markets where the middle class is rising and growing more affluent.

Walmart also has been spending money to give its existing stores a much-needed makeover. Using part of its windfall from President Trump’s 2018 tax cut, the company has raised wages to motivate workers and create a more pleasant shopping ambience.

Walmart certainly can afford these efforts. The company boasts total cash on hand of $7.7 billion, an ample war chest to take the fight to Amazon.

While other big-box stores fall by the wayside, Walmart has been able to navigate the changing retail landscape.

Despite the onslaught from fierce competitors such as Amazon, Walmart remains a stable growth-and-income stock with a safe and probably growing dividend. The “Empire that Sam Built” rests on a solid foundation.