Thought the trade war was waning? Think again. Like the monster in a horror movie, trade tensions just won’t die.

During the first four months of 2019, the S&P 500 soared 17.5%, the index’s best start to a year since 1987. But this week, the resurgence of trade tensions has thrown cold water on the market’s hot streak.

Investors had grown complacent about tariff threats, assuming they would eventually dissipate as the U.S. and China reach accommodation. But the trade war is back, with a vengeance.

With investors already nervous about trade tensions, Trump declared at a rally in Florida on Wednesday evening: “China broke the deal. They can’t do that, so they’ll be paying.” Two days of trade talks with a Chinese delegation began today in Washington, DC.

This back-and-forth on tariffs has put Wall Street on a roller-coaster. Investors have been dumping shares of companies that are heavily reliant on China for revenue, such as those in the transportation, industrial and technology sectors.

The White House is threatening to boost tariffs on about $200 billion of Chinese imports to 25%, from 10%, on Friday. Tomorrow’s deadline looms, with both sides still far apart. Trump renewed his tariff threat after Chinese negotiators withdrew certain commitments, such as making China more open to foreign goods.

You should be concerned right now about the growing contradiction between national “populism” and basic economics.

Populists on the extreme right and left applaud Trump’s renewed resolve to confront China with tariffs. They want to get tough with a country they accuse of being a trade cheat. Most mainstream Democrats and Republicans, as well as the business community, oppose tariffs.

Does China sometimes throw sharp elbows when it comes to trade? Absolutely. But past experience shows that tariffs never work, whereas multilateral negotiation often does.

Workers in America (as well as in Western Europe) have been supporting angry, insurgent candidates because they want a bigger share of the economic spoils. Their resentments are quite understandable.

However, the math can’t accommodate a rise in real wages with an overvalued equity rally based on expectations that corporate profits will climb faster than gross domestic product.

Trump and his base reject globalization, which again is understandable. Globalization is the source of many social inequalities.

However, the free movement of labor, goods and services across national borders boosts corporate profits, which in turn lifts share prices… which in turn buoys the 401k plans and Individual Retirement Accounts of millions of Americans.

Simply put, it’s impossible to please populist voters and stock markets. Trump’s base is happy right now. Investors are not.

The markets in recent months have risen and fallen according to the whims of trade negotiators. An encouraging press release from Beijing or Washington sends stocks up; a belligerent presidential tweet sends them down. The off-again, on-again trade war is whipsawing investors.

Trade war: a losing game for both sides… 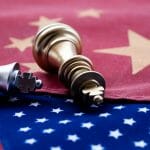 To understand the stock market’s choppiness this week, let’s turn to game theory.

Protectionists seem to think that trade is a zero-sum game, in which each participant’s gain or loss is balanced by the losses or gains of the other participants. It’s not.

The rise in living standards around the globe after World War II is due in large part to the expansion of free trade. That’s a positive-sum game, in which the sum of positives and negatives (wins and losses) is positive.

Trade wars, on the other hand, are a negative-sum game. All sides lose. Wall Street is waking up to the lose-lose proposition of protectionism. You should, too.

Investors are haunted by the specter of the 1930 Smoot-Hawley Tariff Act. Enacted under the Hoover administration, Smoot-Hawley raised U.S. tariffs on over 20,000 imported goods. The tariffs collapsed the banking system and helped push the U.S. and the global economy into a decade-long depression. This history lesson is not lost on traders.

The financial community understands that tearing up the rules on which international trade is based will not make America great again. Nonetheless, U.S. government intervention is becoming more aggressive. Investors initially thought President Trump was bluffing with his tough trade talk. He wasn’t.

Trump has been boasting that as China pays for new tariffs, the money is filling the coffers of the U.S. Treasury. This is false. Companies pay tariffs, not countries, and these added costs are passed along to consumers in the form of higher prices.

President Trump’s “America First” policy could start a full-blown trade war and result in America Last, with dire consequences for many of the multinational blue chips commonly found in retirement portfolios. The following chart tells the story: 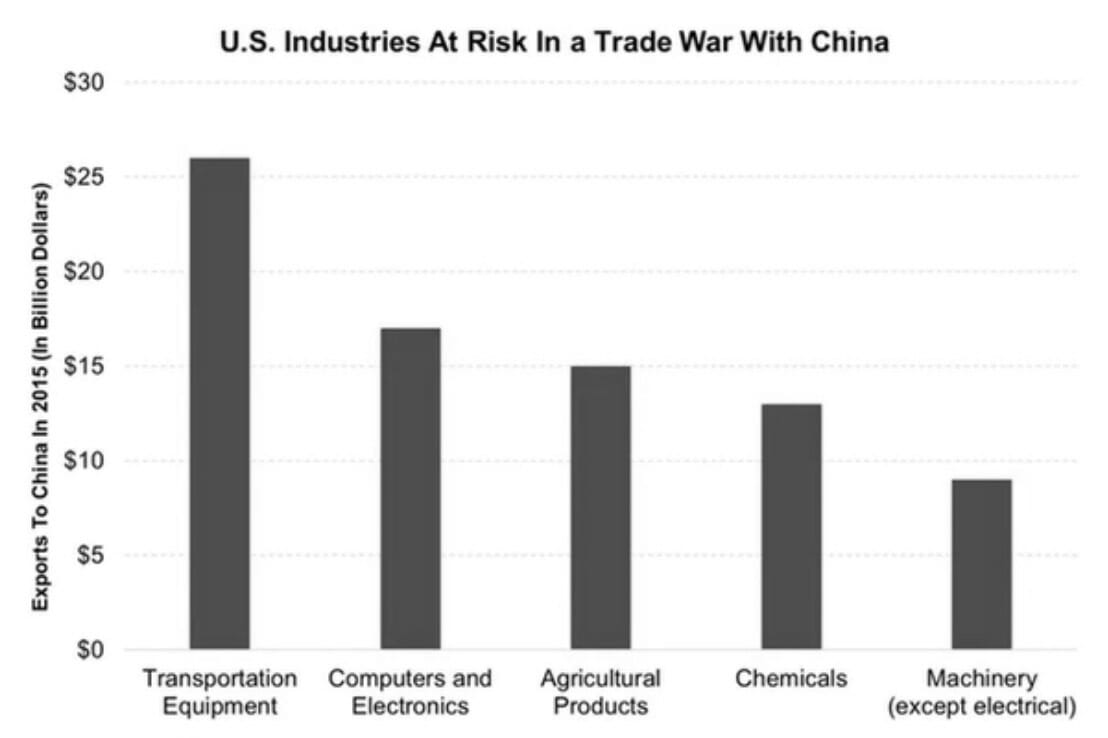 During earnings calls this season, an increasing number of bellwether manufacturing and industrial companies have warned that tariffs are dampening demand and raising costs, putting pressure on margins.

The trade war is a key factor in the overall negative projection for earnings this quarter. Indeed, the S&P 500 is reporting its first year-over-year decline in net profit margin since 2016.

As an analyst and journalist, I’ve been covering the financial markets since the Reagan era. Over the years, I’ve witnessed all manner of folly on Wall Street. Maybe I’m getting too cynical, but I don’t think this trade war will end anytime soon.

The White House is populated with determined trade hawks, the president wants to appease his base by appearing tough on trade, and the Chinese refuse to lose face in any way. The president will continue to bash China because he has concluded that it’s a politically winning message for him.

The upshot: trade tensions will persist, all the way up to the 2020 election. Take proactive measure now, to protect your portfolio from the chaos ahead.

Data released this week shows that wealthy investors are holding a high level of cash now, largely because of trade war fears. UBS Group (NYSE: UBS), the world’s largest wealth manager, reports that high-net-worth portfolios are holding 32% of their funds in cash.

To my mind, that reflects excessive caution. Don’t get too defensive with your allocations; opportunities for growth still abound. But it’s a shrewd idea to shift your stance toward “defensive growth.” Pocket at least partial gains from your biggest winners, especially mega-cap technology stocks that have enjoyed a big run; elevate cash levels (about 15% is a prudent allocation right now); and transition away from momentum stocks and toward value plays.

And whenever you see a government mouthpiece on CNBC pontificating about the trade war, hit the mute button. Ignore short-term political theater. Stick to long-term fundamentals.

Got a question about the trade war? Drop me a line: mailbag@investingdaily.com