This trade war is brought to you, courtesy of Twitter.

For 10 months, China has been paying Tariffs to the USA of 25% on 50 Billion Dollars of High Tech, and 10% on 200 Billion Dollars of other goods. These payments are partially responsible for our great economic results. The 10% will go up to 25% on Friday. 325 Billions Dollars….

….of additional goods sent to us by China remain untaxed, but will be shortly, at a rate of 25%. The Tariffs paid to the USA have had little impact on product cost, mostly borne by China. The Trade Deal with China continues, but too slowly, as they attempt to renegotiate. No!

On Monday, May 6, Trump followed up with this tweet:

No matter. As Wall Street discovered to its dismay, the president’s threats were not idle. Below, I’ll show you how to position your portfolio for “defensive growth” amid rising trade hostilities and geopolitical turmoil.

Stocks get slammed by superpower collision… 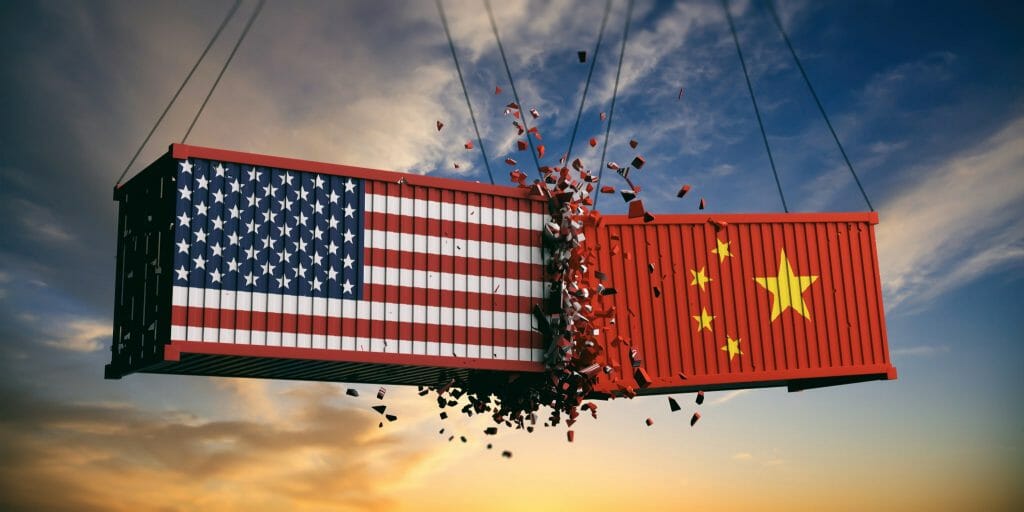 China today responded by hiking tariffs on $60 billion worth of U.S. imports, starting on June 1. Stocks again took a dive.

Our Tweeter-in-Chief has demonstrated, once again, his uncanny ability to wipe out trillions of dollars in stock market valuation, with just a few tweets.

In the past, investors have consoled themselves by assuming that most of Trump’s tariff threats have been negotiating tactics to intimidate trading partners into making concessions. This self-delusion is giving way to the realization that U.S. tariffs are real and destructive, as several corporations this earnings season report that tariffs are squeezing profit margins. 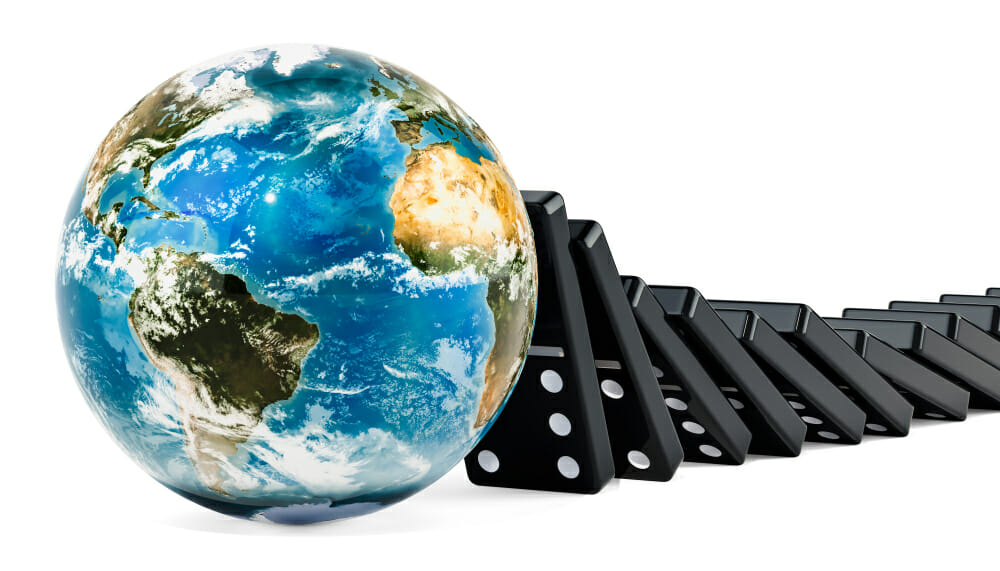 In addition to the trade standoff with China, other geopolitical risks are rising. North Korea recently launched new missile tests; nuclear tensions are emerging between the U.S. and Iran; and the Brexit mess is sowing political discord in Britain and the European Union.

The U.S. wants certain trade concessions from China, notably an end to the theft of intellectual property. China refuses to budge. Meanwhile, the world’s second-largest economy is grappling with its own problems.

Growth in China’s gross domestic product (GDP) in 2018 was the lowest in 28 years. The country’s total debt-to-GDP ratio neared 300% in the first quarter of 2018. The global growth engine of China could stumble this year, exerting a domino effect throughout financial markets.

Let me be clear: I agree that China is a bad actor on trade. It’s indisputable that China Inc. wields overly aggressive trade tactics, some in violation of international law. China’s long-term goal is to achieve global economic supremacy, at the expense of the U.S. But the vast majority of economists and business leaders contend that tariffs are self-defeating and never work.

Most Democrats as well as Republicans oppose tariffs. Indeed, the most fervent criticism of Trump’s tariffs is coming from conservative Republican Senators whose constituents bear the brunt.

Rather than taking the pragmatic approach to curb China’s predatory behavior — multilateral trade negotiations — the Trump administration prefers to go it alone.

According to a new report from Oxford Economics, the latest U.S. tariffs will cost the American economy $62 billion by next year, translating to $490 per household. U.S. employment also is poised to take a hit. The latest tariff rise could result in 200,000 fewer jobs, according to Oxford Economics. The chart tells the story: 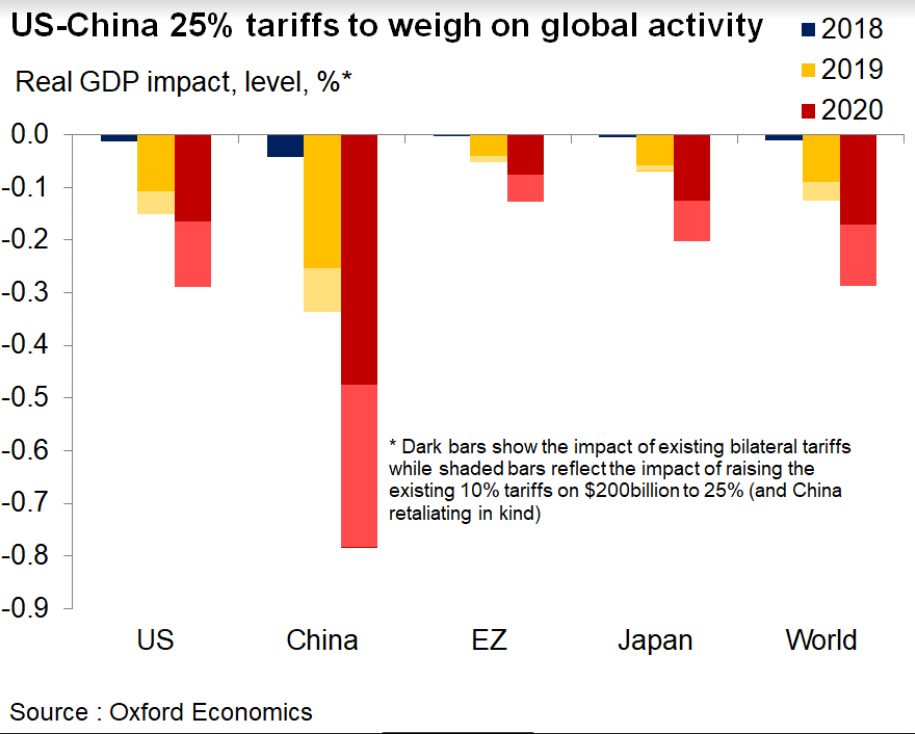 The White House today suggested that Trump might discuss trade with President Xi Jinping of China next month at the Group of 20 summit meeting in Japan. One day the trade war is off. Next day, it’s on. Investors veer from complacency to panic.

However, in my view, Trump is in no hurry to end this trade conflict, as he strives to appear “tough” to his electoral base ahead of the 2020 elections. Ironically, the agricultural red states that went for Trump in the 2016 election are getting clobbered the worst.

Bankruptcies among U.S. farmers are rising, as China cancels soybean and corn orders and devises ways to do without U.S. imports of those crucial crops. China has been mandating and subsidizing higher soybean and corn production from its own farmers and relying on Brazil and Russia as alternative sources. Yep, that’s right — Russia is a key beneficiary of Trump’s trade war.

Nonetheless, Trump’s supporters are pleased to see the president bash overseas boogeymen. Trump has concluded that the trade war is a political winner for him. If you hear someone on CNBC say that trade war resolution is near… well, don’t believe it. You should expect trade-induced volatility to continue into next year, if not beyond.

How to Position Your Portfolio Now

Because of the conditions and trends that I’ve just laid out for you, further sell-offs probably lie ahead. I advise these specific steps for investors:

During the great financial crisis of 2008-2009, enormous cross-border cooperation was deployed to rescue world capitalism from collapse. Today, due to the rise of nationalism, international relationships are frayed, even between America and traditional allies.

When a country (USA) is losing many billions of dollars on trade with virtually every country it does business with, trade wars are good, and easy to win. Example, when we are down $100 billion with a certain country and they get cute, don’t trade anymore-we win big. It’s easy!

Will Trump’s boast prove true? The answer is simple. No one wins a trade war. Especially not the stock market. Make sure your portfolio is protected. The next sell-off is just another tweet away.

Comments about the escalating trade war? I want to hear your opinion: mailbag@investingdaily.com