Will The Fed Play Santa in July?

It’s a little early to start expecting Santa Claus, but that describes Wall Street’s sentiment right now. In this case, the beneficent gift-giver is the Federal Reserve.

Investors are pinning considerable hopes on another interest rate cut this year, possibly at the next meeting of the Fed’s policy-making Federal Open Market Committee (FOMC) on July 30-31.

The FOMC voted in June to keep the benchmark rate in a target range of 2.25% to 2.5%, where it has been since December’s quarter-point increase.

In describing its policy stance in June, the FOMC dropped the word “patient.” This new tone was interpreted as positive by Wall Street, because it supposedly means the Fed is no longer staying neutral and has adopted a bias toward further cuts.

However, I think another rate cut is unlikely, given a decade’s worth of easy money and signs (albeit muted) that inflation could pick up down the road. Monetary policy has been loose for a very long time and there’s usually a lag between Fed policy and inflation.

Price pressures seem under control now but eventually inflation will probably exceed the Fed’s 2% target, due to such factors as wage growth and tariffs. If anything, my hunch is that the Fed’s doves will have a change of heart and we’ll actually see another rate hike. If that happens, brace yourself for a storm of “rage tweets” from President Trump, who has been pressuring the Fed to cut rates.

The U.S. economy appears strong enough to withstand another rate hike, which would be a prudent move that stabilizes the economy over the longer term. Political pressure from the White House on the Fed to stimulate the economy reminds me of my two toddler grandsons: when they’re clamoring for treats, I don’t acquiesce when instead they should be eating their vegetables.

Hopes for a rate cut are setting up the markets for a fall. If easing doesn’t come, investors will be disappointed.

Goldman Sachs (NYSE: GS) agrees with me. The investment bank recently predicted that the Fed won’t cut rates this year and dismissed such hopes as misguided. Problem is, further easing is now priced into the markets.

More importantly, the efficacy of another rate cut is doubtful. Consider the fact that central bank rate cuts around the world did not prevent the most recent recessions: the U.S. in 2008, Europe in 2011, and Japan in 2014.

In the U.S., the first rate cut in September 2007 occurred just a few months before the economy peaked in December and fell into a long, brutal recession. In Europe, the first rate cut in November 2011 occurred at the same time that the Continent’s recession started, which lasted until 2013. In Japan, with rates near zero in 2014, the Bank of Japan undertook monetary easing but gross domestic product contracted that year anyway.

Predictably, these central bank actions triggered temporary rallies in stocks but did nothing to prevent recessions. If global leading indicators continue to deteriorate, there’s not much that the Fed and its foreign counterparts can do as remedial action.

European Central Bank policy makers on July 2 stated that they don’t plan to announce further monetary stimulus at their meeting this month and will instead wait for more data concerning the health of Europe’s economy.

The U.S. economy is in better shape than most national economies, but the global picture appears worrisome. The latest composite leading index released by the Organization for Economic Cooperation and Development (OECD) has dropped to 99.0, which according to historical patterns suggests that a recession is imminent (see chart, compiled with OECD data). 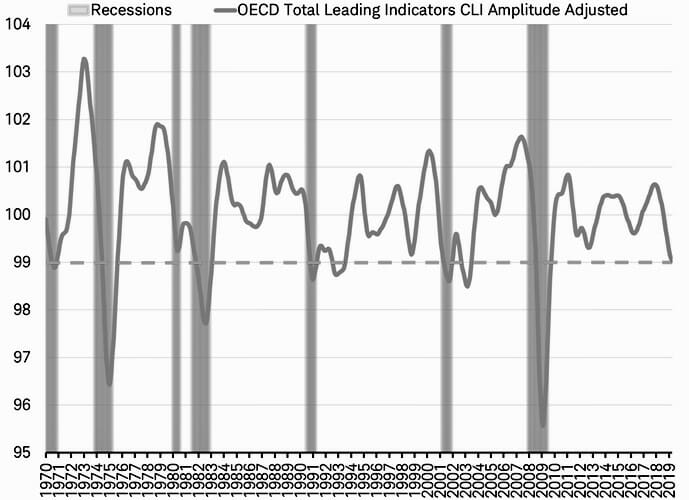 Research firm IHS Markit reported this week that its closely watched Eurozone Manufacturing PMI fell from 47.7 in May to 47.6 in June, reflecting a slide in manufacturing conditions for a fifth successive month.

Most of the blame was placed on tariffs and Brexit. As Britain’s government descends into disarray and hopes for a “soft Brexit” fade, the British and European economies are vulnerable. Quitting the European Union (EU) without a deal remains the legal default for Britain on October 31.

So far, a grand bargain between London and Brussels has remained elusive, with Brexit hardliners in the UK holding the upper hand. The biggest loser will be London’s financial sector.

Signs are mounting that European manufacturing conditions will only get worse. Notably, the PMI survey’s forward-looking new orders-to-inventory ratio, and its future expectations indicator, both deteriorated in June (see chart). 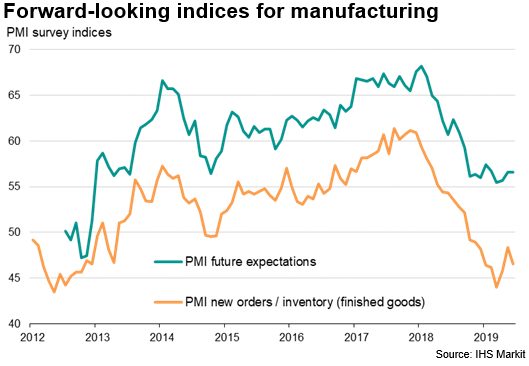 It won’t help European manufacturing that the Trump administration is stepping-up its trade conflict with the EU over aerospace subsidies, proposing new tariffs on EU goods worth $4 billion.

The tariffs, announced Monday by the United States Trade Representative (USTR), cover 89 products including meat, whiskey, cheese, pasta, fruits, and coffee. They would be added to a list of EU exports worth $21 billion that the USTR said in April would be subject to tariffs. Governments don’t pay tariffs; companies do. Those added costs are passed along to consumers.

As for the supposed trade truce hammered out between the U.S. and China at last weekend’s G-20 summit, it’s mostly smoke-and-mirrors designed to appease investors. The world’s two largest economies are competing for global hegemony; this fight for strategic dominance won’t end anytime soon.

Meanwhile, although threatened tariffs are in temporary abeyance, many onerous trade sanctions are firmly in place and they’re already hurting corporate profits. Investors have lost sight of the fact that tariffs are difficult to reverse; corporations and supply chains adapt to them and they become the status quo.

Energy traders are bearish about the global economy, that’s for sure. At their meeting in Vienna on Tuesday, OPEC and its allies secured an extension of existing production cuts (a total of 1.2 million barrels per day) until the end of March 2020. Crude prices fell anyway yesterday to a one-week low, amid a persistent glut and recession fears. Falling energy prices are a red flag of sputtering economic activity.

Accordingly, an earnings recession could be in the works. Earnings for S&P 500 companies are expected to post a year-over-year decline of 2.6% in the second quarter, following a slight dip that occurred in the first quarter, according to the latest estimates from the research firm FactSet. So if earnings are in a funk, why are stocks flirting with record highs? Thank investor exuberance over the Fed’s apparent dovishness.

Expecting the Fed to fix these many problems by cutting rates in July is like believing in Santa Claus. And we’re too old for that.

Questions or comments? I welcome your feedback: mailbag@investingdaily.com