The stock market has gotten shaky. After hitting an all-time high on July 29, the S&P 500 Index dropped nearly 6% over the next five trading days.

On July 31, the Federal Reserve cut rates but hinted that it may not be willing to go as far as Wall Street would like. A few days later, the simmering trade standoff between the U.S. and China erupted into new hostilities.

Suddenly, talk of daily record highs for the major market indexes has been replaced by speculation that a correction is underway.

That being the case, you may be wondering if there is any way to make money in this market. 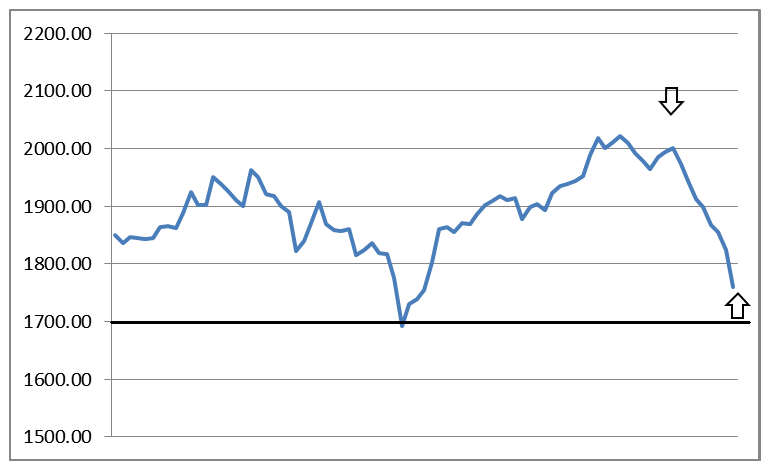 I suggested the following course of action for Amazon shareholders looking to enhance their returns:

“If you own AMZN, now may be the right time to consider using an options strategy to enhance your returns, since there may not be much share price appreciation anytime soon. For example, a few days ago you could have sold a ‘covered call’ on Amazon with a strike price of $2,000 that expires in January 2020 for a premium of $165.”

Since then, AMZN has dropped below $1,800. On August 5, that same option could be bought back for twenty cents to close out the contract.

It’s Not Too Late

Think about that for a minute. Something you could have sold for $165 three weeks ago — if you followed my advice — is now selling for only twenty cents!

If you don’t own shares of Amazon, you may be thinking that it’s too late for you to join in the fun. Not so.

The psychology of the stock market is counterintuitive. Optimism is never higher than when something is as expensive as it’s ever been, and pessimism is at its worst when that same thing can be bought considerably cheaper.

Don’t ask me to explain it; I can’t. But what I can explain is how you can make money off of both extremes.

Now that Amazon has been discounted more than 10%, many investors fear it will go a lot lower. Even better, they are willing to pay you good money to carry that fear for them over the next five months.

Either Way, You Win

Keep in mind, under either scenario you get to keep the $106 option premium regardless of which way the stock goes. That means your breakeven price if you have the stock put to you at $1,700 is only $1,594 because of the option premium you received.

What are the odds that AMZN will fall below $1,700 over the next five months? I have no idea. But at that price, it becomes a reasonably priced stock based on its sales growth and gradually expanding profit margin.

The way I see it, this a classic win-win situation.

Either you collect money now for doing absolutely nothing over the next five months, or you get paid to buy AMZN at a price it could be bought for more than a year ago.

And it’s not just Amazon. This type of market is ideal for selling naked puts against high-quality growth stocks. Option premiums soar when emotions are high on Wall Street.

That creates an opportunity for rational investors, especially when they use a proven system for profiting off the emotions of other investors.

Jim is chief investment strategist of the elite trading services Options For Income, Velocity Trader, and Jim Fink’s Inner Circle. He has agreed to show 500 smart investors how his “paragon” trading system could help them earn 2,500% in just one year, guaranteed.