Bracing for the Next Black Swan

I’m a fan of the British comedy group, Monty Python’s Flying Circus. One of my favorite sketches involves a modern Englishman muttering: “I didn’t expect a kind of Spanish Inquisition,” in retort to his nagging wife, when suddenly trumpets blare and into the room burst three Spanish cardinals from the 15th century. The leader shouts: “Nobody expects the Spanish Inquisition!” More silliness ensues.

I think of this famous Python routine whenever I hear an analyst on television say that he or she “expects” a certain event to serve as a black swan. The fact is, nobody expects a black swan. Unforeseen by probability models, a black swan is a complete surprise with severe consequences.

I’m currently seeing echoes of 2008, a black swan year. The trigger could come from anywhere, at any time.

Latest case in point: The Federal Deposit Insurance Corp. (FDIC) on Tuesday voted to approve a five-agency revision of the post-crisis regulation known as the “Volcker Rule.”

The approval helps streamline the manner in which banks can trade securities using their own funds, the ban of which was born of the Great Financial Crisis of 2008-2009.

This rollback of the post-crisis crackdown on banks focuses on the definition of “proprietary trading,” a transaction initiated by a financial firm for direct gain instead of investing for the benefit of clients.

Enacted as part of the Dodd-Frank Wall Street Reform and Protection Act, the Volcker Rule restricts banks from proprietary trading and from investing their own money in hedge funds and private equity funds. The reform was named after former Fed Chair Paul Volcker.

Other institutions, such as the Securities and Exchange Commission, still must weigh in on the proposed loosening of the Volcker Rule. But the trend is clear. Wall Street is getting the deregulation that it craves.

Sure, too many rules can stifle competition. But as the global financial crisis and subprime mortgage scandal of 2008 amply proved, sometimes a clear set of rules is good for everyone concerned. It takes a referee, in this case government regulators, to make sure there’s a level playing field and the game is being played fairly. Prudent regulations help save capitalism from its own excesses. But for some people, I guess that’s too theoretical.

Under President Trump, the banking industry has thrived. From his appointments and policies, Trump has made it clear that the financial services sector has favored status with his administration. Notably, Trump named longtime banker and former Goldman Sachs (NYSE: GS) executive Steven Mnuchin as Treasury secretary.

Over the past two years, the Trump team has rolled back banking regulations loathed by global investment bankers, exemplified by Dodd–Frank, which passed in 2010 in the wake of the financial crisis.

Under the laissez-faire Trump regime, bankers and industry-friendly regulators could be laying the groundwork for another financial catastrophe.

Remember collateralized debt obligations, aka CDOs? They were the villains of the financial crisis of 2008 and helped trigger the global meltdown. Well, they’re coming back into vogue. The re-emergence of highly risky CDOs doesn’t seem to bother anyone in government, but it should.

The Federal Reserve and other government entities have been systematically dismantling the reforms and buffers that were put in place to prevent another 2008 meltdown. Regulations and capital requirements have been loosened.

In addition, Dodd-Frank “stress tests” have been made easier. A stress test is an examination of what would happen to a bank under challenging situations. The Fed devises dire hypothetical scenarios and gauges how a bank, under its present financial condition, would weather the storm.

Bankers also were delighted with tax overhaul. The massive corporate income tax cut signed by Trump in December 2017 disproportionately helped banks, because they tend to take fewer deductions than other types of companies.

However, those tax cuts came with a hefty price tag. The federal deficit has soared (see chart). 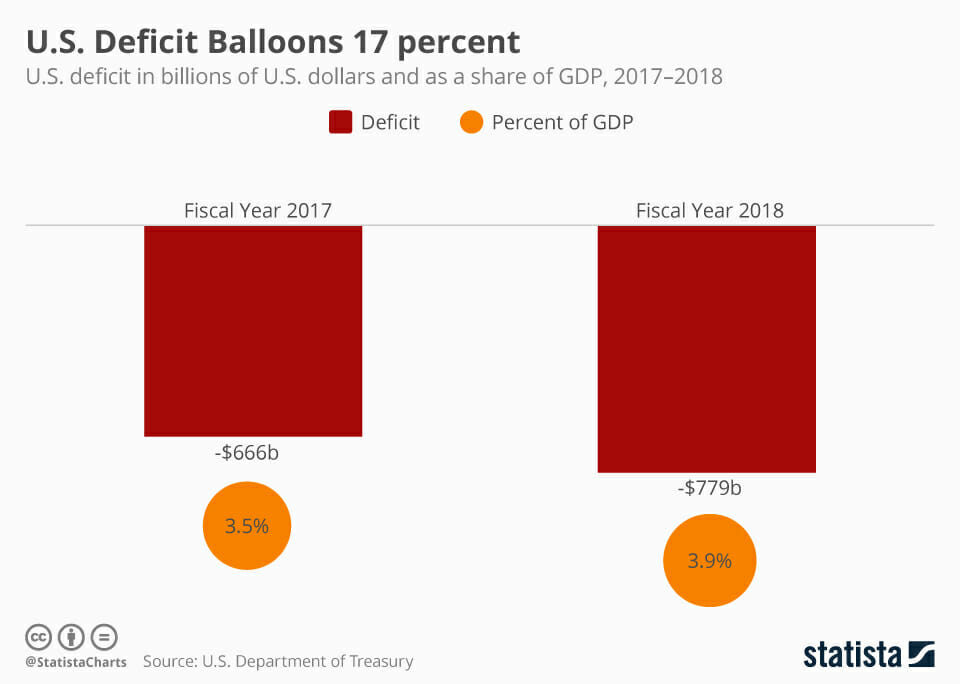 When the next recession occurs, fiscal and monetary policymakers will have fewer tools at their disposal. The massive deficit and low interest rates will make it difficult to enact emergency stimulus measures.

Italy is the third-largest national economy in the Euro Zone and the eighth-largest in the world. Italy is the second largest manufacturer in Europe, behind Germany, the world’s largest wine producer, and famous for the style and high quality of its automobiles, aircraft, appliances, and fashion. The largest market for luxury goods in Europe, Italy taught the world how to eat and make movies and live La Dolce Vita.

Italy also happens to be an economic basket case and yesterday its government collapsed.

Italy on Tuesday descended into chaos after its right-wing nationalist coalition government came apart amid an internal power struggle. Italy is plagued by high unemployment and stagnant economic growth. The country’s banks are saddled with €360 billion worth of bad loans, of which €200 billion are categorized as insolvent.

The dominoes could be lining up for a global financial contagion.

On top of these geopolitical concerns, the U.S. is embroiled in a global trade war and has alienated even its staunchest allies.

Trump’s trade war with China is not only bankrupting farmers at a record rate but will cost families across America $1,000 per year, according to a report released Monday by JPMorgan Chase (NYSE: JPM).

Under these conditions, it’s small wonder that gold prices have soared. Face it: the dust will never settle during a Trump administration, especially when it comes to foreign policy. When the world stage gets messy, investors flee to the safe haven of gold.

However, the time to make a move isn’t when the gold bugs are shouting from the rooftops and gold prices have climbed to unsustainable levels. Hedge your portfolio with gold now, while prices are still relatively reasonable. A rule of thumb is to allocate 5%-10% of your portfolio in precious metals.

Gold isn’t the only crisis hedge among precious metals. You should also consider silver, which tends to be less volatile than the Midas metal because it also sports several industrial uses.

You should be worried about the sustainability of the bull market’s remarkable duration. As the broader indices hover in overbought territory, this aging 10-year bull market is showing signs of fatigue.

It’s not just the perennial prophets of doom. Even the reputable, time-proven analysts are weighing in with pessimism. Economists at Goldman Sachs, Morgan Stanley (NYSE: MS), and JPMorgan are all predicting a correction of at least 10% in the third quarter.

As in 2008, the drop in the 10-Year Treasury yield has spooked investors. The inverted yield curve is a reliable predictor of recessions. Meanwhile, Donald Trump has consistently shown the ability to wipe out billions of dollars in market valuation with a single tweet.

Remember, nobody expects a black swan. And that’s no joke.

Questions about the parallels between today and 2008? Drop me a line: mailbag@investingdaily.com