Among all Wall Street truisms, perhaps the truest is: “Don’t try to catch a falling knife.” In other words, wait until a falling stock has fully bottomed out and has started to rebound before buying it.

Problem is, only with hindsight do we know for sure when a stock has finally bottomed out. Sometimes a stock will appear to have bottomed out and begin to rally, only to once again reverse course and fall even lower. 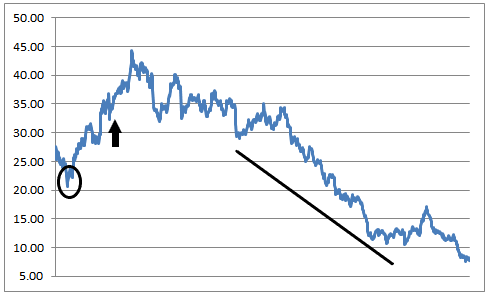 As the above stock price chart shows, such has been the case with India-based automaker Tata Motors (NYSE: TTM). I added Tata to my portfolio in December 2016 at $34 when it appeared to have bottomed out near $22 earlier in the year.

I figured a 50% retracement meant Tata was heading back towards $50 where it had traded the previous year. Boy, was I ever wrong!

It wasn’t long until Tata was once again sliding down the charts. Two months ago, it sunk below $9 for the first time in a decade where it still sits today.

That is partly due to Brexit fears, because Tata owns Jaguar and has a manufacturing facility in Great Britain. It’s also the result of the company becoming bloated with debt and having to pare back its spending over the past couple of years.

To its credit, the company has steadfastly stuck with its financial restructuring plan while its stock has taken a beating. That can’t fix what has happened in the past but could turn out to be immensely valuable in the months to come.

The escalating trade war between the United States and China could prove to be a godsend for Tata. Last month, China announced that it will resume a 25% tariff this December on cars made in the USA.

That is particularly bad news for BMW (OTC: BAMXF), which makes six of the 10 best-selling cars in China right here in the U.S. Adding the new tariff to existing import duties would drive up the cost of these already pricey vehicles by 50%

That means Chinese consumers face a dilemma: keep buying prestigious BMWs even though they will soon be outrageously expensive, or find a suitable alternative.

There aren’t many carmakers that carry the same reputation for quality as BMW, but Jaguar is one of them. Turns out, Jaguar is already in a joint venture with Chinese automaker Chery to make and sell cars in China.

Ever the opportunist, Jaguar Land Rover (JLR), which is a wholly owned subsidiary of Tata, announced on September 4 that it would introduce 30 new cars in China within two years. Don’t be surprised if some of those vehicles bear an uncanny similarity to those top-selling BMW models that will soon be considerably more expensive.

It appears that Chinese consumers aren’t waiting around, either. In July, JLR’s sales in China soared 40%, followed by a 17% increase in August.

And that’s before the new tariff takes effect. If Chinese consumers are swarming to Jaguar vehicles now, it’s likely that trend will only increase once prices of BMWs jump another 25% in three months.

At the risk of trying to catch a falling knife, I’m calling the bottom on Tata. I believe it has bottomed out and will soon be heading back up the charts.

That isn’t much solace for those of us that bought it at $35. But if you buy it now, a small move like that could result in large percentage gains.

As for me, I’m not waiting around for Tata to get all the way back to $35 to breakeven on this trade. That could take years and be derailed by another global recession in the meantime.

Instead, I am going to buy a call option on TTM that could generate the same return in considerably less time. For example, a call option expiring in January 2021 with an $8 strike price could be bought for $2 a few days ago.

That means TTM only needs to rise above $10 over the next 16 months for me to make money on this option. If it rises to $12, I’ll double my money. And if it gets to $16, I will have completely made up the loss I have incurred in the stock.

Of course, I could lose all my money if TTM falls below $8 and does not recover by the time my option expires. I don’t think that’s likely to happen, but it’s a risk I’m willing to take.

However, you may not be willing to accept that kind of risk with your own money. In that case, I strongly suggest that you consider following the advice of my colleague Jim Fink.

Jim has fine-tuned a proprietary but very simple investing technique that generates steady income, in up or down markets.

Jim’s returns are so reliable, they look just like a paycheck. With his system, you can collect regular deposits of $2,950 or more, every Thursday.

But instead of following the 9-to-5 grind in a claustrophobic office building, you can sit back at home and let your invested capital do all the work for you. That’s a home-based paycheck that any investor should love.

We explain exactly how Jim’s moneymaking technique works, and what you need to do to earn your first “paycheck” using it. Click here for all the details.