No Frackin’ Way: Should Investors Fear a Drilling Ban?

Many people view elections as a vote cast between good and evil. They are voting for their tribe and against that other tribe that would do them harm.

I generally view elections as a choice between two liars. It’s the lesser of evils, either of which will do me some amount of harm.

The next presidential election will feature President Donald Trump on one side. His trade wars and erratic tweets have added a great deal of volatility to the markets. His tariffs are a tax on consumers, which will cost the average household an estimated $2,000 in 2020.

In the Other Corner…

On the other side will be a Democratic candidate, many of whom are making unrealistic promises that would also potentially have devastating economic consequences.

The latest test of party purity for the Democrats involves promises to ban hydraulic fracturing (fracking) if elected. Senator Elizabeth Warren (D-MA) is but one of many to make such a promise, tweeting:

Senators Bernie Sanders (I-VT) and Kamala Harris (D-CA) have both made similar promises.

If you work in the oil and gas industry, or are an investor in the industry, these promises may alarm you. You are unlikely to vote for someone whose campaign promise would ruin your industry and investments.

But these are simply unrealistic promises.

What Fracking Did For America

The resurgence of U.S. oil and gas production over the past dozen years is directly attributable to fracking. While fracking has been going on in the U.S. since the late 1940s, it wasn’t until just after the turn of the century that it began to be increasingly used in conjunction with horizontal drilling. That marriage of technologies ushered in the fracking boom and resulted in a renaissance of oil and gas production.

With respect to oil, in 2005 net imports of oil and finished products like gasoline had reached 13 million barrels per day (BPD). But fracking sent U.S. oil production soaring. That has been the single biggest factor in seeing these net imports drop to less than 1 million BPD. U.S. dependence on foreign oil hasn’t been this low for more than 50 years.

Consequences of a Ban

How do these politicians envision that a ban would work? They foresee modest and controlled production declines, offset by other policies that would reduce oil demand. In other words, they don’t believe a ban would lead to a steady increase in oil imports.

However, if we look to California, a different picture emerges. California’s main supplies of oil 20 years ago were in-state and Alaskan production. Neither California nor Alaska engage in fracking to any appreciable extent. Both states have missed out on the fracking-enabled shale oil boom. As a result, oil production in Alaska and California have steadily declined.

Meanwhile, even though California has the nation’s most aggressive policies to reduce oil demand, that demand hasn’t been going down appreciably. Consequently, California’s dependence on foreign oil has skyrocketed as its two main sources of domestic production have declined. 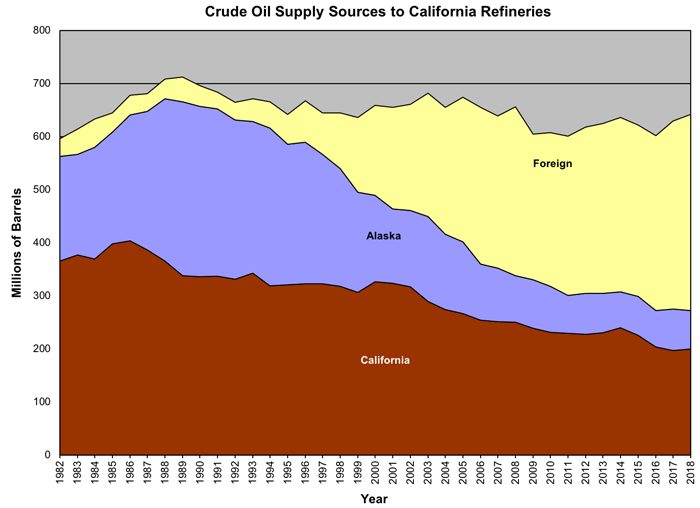 This is instructive, because it is an actual case study of “no fracking” over time. Before the fracking boom, the entire country was becoming increasingly dependent on foreign oil. But even though overall U.S. oil imports have plummeted as U.S. shale oil production has grown, California’s foreign oil dependence continues to climb steadily higher.

According to data from Baker Hughes, nearly 90% of all new oil and gas wells today are horizontal, fracked wells. An immediate ban on fracking — as these Democratic candidates have proposed — would result in an immediate decline in U.S. oil and gas production.

Net oil imports, which have been trending down for years, would immediately begin to climb. U.S. dependence on foreign oil would again begin to grow. We don’t have to fantasize about what might happen if we simultaneously adopt aggressive policies to curb demand. We just need to look at the actual results in California, where they did exactly that.

Conclusion: No Chance of a National Ban

These are some of the things that would happen if fracking were immediately banned. Those calling for an immediate ban are either pandering, or they are naive. In reality, such a ban wouldn’t happen, because a president would never get the political support to enact such a national ban. Local bans will sometimes win support, but a nationwide ban? No way.

These candidates probably know this — and some may even be aware of the consequences — in which case they are simply being demagogues. In the process, they risk losing moderate voters who may have otherwise voted for them.

But at the end of the day, aren’t you tired of worrying about the ever-shifting political climate? Sensible investors yearn for opportunities that are immune from election campaigns and changing regulations. That’s why you should turn to my colleague, Jim Fink.

Jim has fine-tuned a proprietary but very simple investing technique that generates steady income. Jim makes money for his followers, no matter what’s happening in Washington or in the markets.

Jim’s returns are so reliable, they look just like a paycheck. With his system, you can collect regular deposits of $2,950 or more, every Thursday.

We explain exactly how Jim’s moneymaking technique works, and what you need to do to earn your first “paycheck” using it. Click here for all the details.