Advice for the Conflicted Investor

An increasing number of analysts are warning that a recession and stock market correction lurk on the horizon. And yet, stocks have continued to advance. Reminds me of an old expression: The dogs bark, but the caravan moves on.

August was a dreary month, with the S&P 500 index falling 1.8%. But as of last Friday’s close, the index was up 18.8% for the year. Stocks finished last week higher for the second consecutive week.

The major indices again flirt with record highs, although they’ve been wracked by considerable volatility along the way. Investors are conflicted. Below, I highlight “defensive growth” strategies appropriate for this mixed-bag environment.

The impetus for the stock market’s upward trajectory last week was news that the U.S. and China would hold high-level trade talks in Washington in October. Pardon me while I stifle a yawn. Will the world’s two largest economies strike a deal? Probably not. After several months of heated rhetoric, personal insults and new tariffs, neither side can afford to lose face.

President Trump can’t meet China half-way, because his electoral base would interpret compromise as capitulation. Wall Street and corporate America have been quite vocal in their opposition to tariffs, but Trump has invested too much ego and political capital in his protectionist policy to abandon it now.

President Xi Jinping faces a similar dilemma. China is preparing to celebrate the 70th anniversary of its founding on October 1. Xi’s fortitude already is coming under question by his colleagues in Beijing, because of the trade war mess and worsening instability in Hong Kong.

At this politically delicate juncture, it’s highly unlikely that Xi would make concessions to an American president who has referred to him as the “enemy” (even though Trump has used the same word to describe his own Federal Reserve chief).

So why is Wall Street so excited about trade talks that will almost certainly prove fruitless? Because openness to dialogue can’t hurt and maybe, just maybe, it will stave off harsher trade sanctions.

Investors continue to reward the promise of further negotiations, even though expectations of actual progress remain low. Sure, that seems illogical. But markets are still governed by human beings, who in turn are driven by fear, greed and other emotions that defy logic.

Markets have gyrated with every policy whim posted by the Tweeter-in-Chief. August was an especially turbulent month. But through it all, stocks have prevailed. The following table (compiled with data from research firm FactSet) gives you a snapshot, as of last Friday’s close.

A possible trade truce also provides handy justification for continued bullishness. The question, though, is how long TINA (There Is No Alternative) can survive as a rationale.

All eyes on the consumer…

Congress returns today from its month-long August recess, so…hang onto your wallet. Your money is never safe when lawmakers are back in town. A major worry on Capitol Hill and in the White House is whether a recession is about to hit.

Economic reports have been mixed and point to downward momentum. Manufacturing activity is contracting but the services sector is picking up. Hiring is resilient but recently hit a speed bump.

The U.S. Labor Department reported Friday that job growth slowed in August, despite the addition of 25,000 temporary government workers for the Census count. New non-farm payrolls fell to 130,000, from a revised 178,000 in July.

However, the labor market remains strong enough to keep unemployment to a 50-year low. What’s more, the slowdown in hiring strengthens the case for another Federal Reserve rate cut later this month.

It’s my view that further monetary loosening probably won’t accomplish much and may actually cause harm down the road, but Wall Street continues to salivate for a cut. As befits a Fed chief, Jerome Powell has been sphinx-like on the topic. Powell indicated last week that the Fed is not forecasting a recession. That said, Powell hasn’t ruled out another interest rate reduction and it’s priced into the markets.

Corporate earnings have posted two quarters of back-to-back declines, which officially constitutes an “earnings recession.” But profits haven’t fallen off a cliff, either. The consumer remains confident, interest rates are still low, and wages are growing.

And so, the bull market lives on. If you exit the stock market now, as some nervous Nellies advise, you’ll leave money on the table. The stock market’s decade-long rise has made fools of the perpetual bears. But it’s time to tread more carefully.

As signs increase that a recession waits around the corner, keep an eye on key economic reports that are scheduled for release this week (see table below). 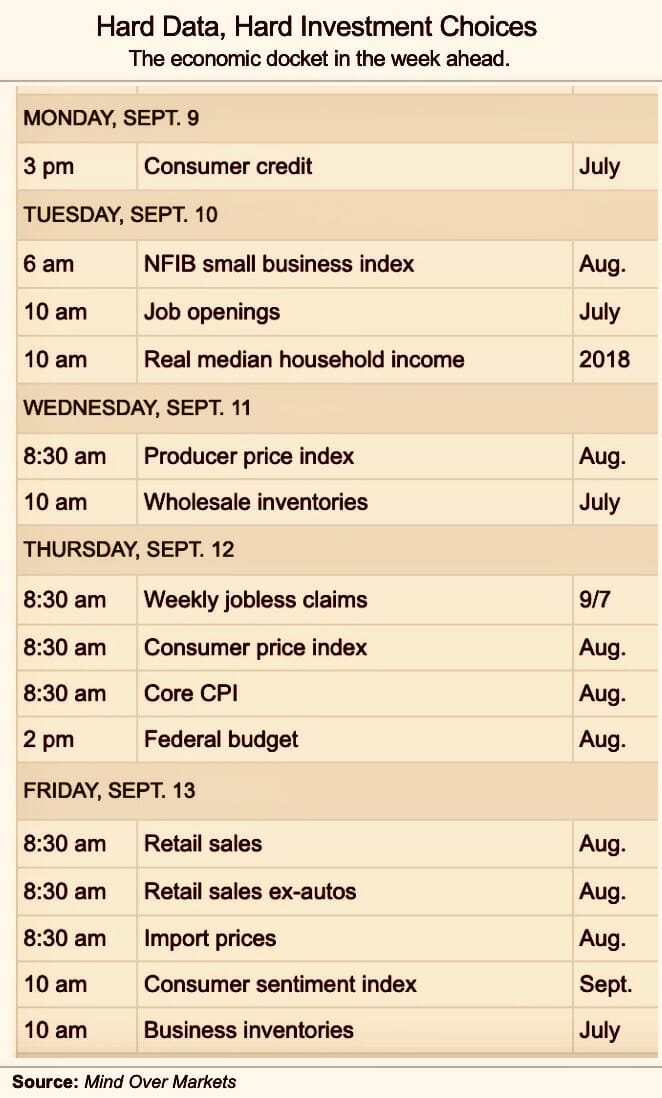 Pay close attention to the retail sales report. Robust consumer spending has offset many worries, such as the trade war.

In the U.S., consumer spending accounts for about 70% of gross domestic product. If retail numbers this Friday suggest that the American shopper is getting stingy, it could be another harbinger of recession.

It’s hard to say how stocks would react to a negative retail report. On Wall Street, sometimes bad news is good news. Declining retail sales might strengthen Powell’s hand for a cut.

The upshot: You should rotate toward defensive sectors, such as utilities, health care, and consumer staples. These “essential services” industries tend to perform well during the late stage of an economic cycle.

I’m particularly keen right now on utility stocks, which provide a buffer against a possible recession as well as the trade war.

Health care enjoys multi-year momentum, largely due to rising middle classes and aging populations around the world. But there’s a catch. The sector also is politically sensitive. As the campaign for the 2020 election heats up, even strong health care stocks could get punished as populist rhetoric takes aim at alleged profiteers in the industry.

U.S. Senator Bernie Sanders (I-VT) is making “Medicare for all” a prominent theme of his presidential campaign. The other Democratic progressives in the race espouse similar views. Merely the discussion of universal health care tends to hurt the stocks of health services providers, especially pharmaceutical companies.

Every four years, presidential candidates on both sides of the political spectrum bash the supposed evils of Big Pharma, which in turn weighs on drug stocks. Voters cheer. But once the election is over, the rhetoric is forgotten, top pharmaceutical executives are appointed to major positions in the new administration, and drug stocks bounce back. That’s exactly the dynamic we’ve witnessed since the 2016 campaign.

A shrewd investment bet now is the booming field of health care information technology (IT), which is better insulated against shifting political winds. The most valuable commodity in the business world today is information, and that’s especially true in health care, where success isn’t just measured in dollars and cents but also in human lives.

One of the hottest sub-sectors in the health industry is electronic record-keeping. As the use of digitized medical records proliferates and the technology behind it becomes more advanced, the federal government mandates its adoption. By tapping this trend, you can simultaneously invest in breakthrough technology and essential services. It’s also a niche that can help recession-proof your portfolio.

It’s impossible to pinpoint exactly when the next recession will occur. But when it does, you must stick to your long-term investment goals. Economies are cyclical and the markets historically have recovered. The alarmists and the politicians bark, but the markets move on.

Questions or comments? Shoot me an email: mailbag@investingdaily.com