Investing in the Finer Things

Amid increasing market volatility and uncertainty, now’s the time to consider collectibles such as artwork, vintage cars, rare coins, stamps, wine, furniture, sports memorabilia, and comics. These alternative investments have shown steady growth in value, regardless of the stock market’s ups and downs.

I recently received an investment insight along those lines in Palm Springs, California, where I spend a week every year with my wife Carole.

During their heyday, entertainers such as Frank Sinatra and Dean Martin owned stylish modernistic homes in the mountains overlooking the desert. In fact, the missus and I recently took a tour of the estate once inhabited by the Chairman of the Board, located high in the San Jacinto Mountains.

One evening, while enjoying adult beverages at sunset in the far more modest Palm Springs home of a local friend, he casually mentioned to me: “See that authentic 1950s Eames lounge chair and ottoman you’re sprawling in? I bought it two years ago for $4,000; I could now sell it for at least $7,000.”

That represents a 75% return and it got me to thinking that collectibles such as antique furniture could serve as investment havens in these fraught times.

During our recent jaunt to Palm Springs, I bumped into the folks at Linda Jones Enterprises. The firm sells cartoon “cels” to investors.

In 1977, Linda Jones Clough, daughter of famed Warner Bros. director Chuck Jones, got a license from Warner Bros. to create and distribute limited edition cel art drawn by her father.

“We’ve noticed a resurgent animation art market and find that people are avidly seeking it out. There’s been a new interest in the production drawings, storyboards and other ephemera from the animated films, not just cel art,” Craig Kausen, president of Linda Jones Enterprises and Chuck Jones’ grandson explained to me at a Palm Springs exhibition of his company’s artwork.

Auction records are being set for drawings, cels, and other production art, such as a concept drawing of Wile E. Coyote by Chuck Jones created in the mid-1950s that sold at Heritage Auctions recently for $9,500, a work that six months prior sold for about half the price.

Estimating the returns from such assets, after costs, can be difficult. Indices covering collectibles aren’t as comprehensive as stock funds. If collectibles are bought and sold at auction, you also have to worry about transaction costs that can reach as high as 40%.

Keep in mind, though, that these assets are usually held for several decades. In fact, they tend to get handed down to generations as heirlooms.

Favorable tax treatment is a big plus. Collectibles such as fine art, high-end wine, antique furniture, and stamps generate no income stream and incur tax only when they’re sold.

Strong third-quarter 2019 operating results at luxury retailers and auction houses reflect growing interest and confidence in the high-end art market. Shareholders are plowing their stock market gains into tangible artwork that gives them aesthetic satisfaction, as well as money-making potential.

The long economic expansion has enriched investors overseas, where there’s a growing appetite for fine and decorative art, jewelry and collectibles. As incomes rise in emerging markets, individuals are looking for luxuries on which to spend their disposable income.

China is the main growth driver of the global collectibles market. The Chinese and global economy in recent months have shown signs of slowing down, but the richest 1% continue to amass wealth. Emerging market economies may be struggling right now, but they boast the fastest-growing populations of high net worth individuals. These nouveau riche are eager to rotate their increasingly endangered paper profits into hard, tangible assets.

Demand is robust from Western collectors as well. In one of the world’s biggest private art deals, hedge-fund billionaire Ken Griffin recently shelled out $500 million for a pair of abstract paintings by Jackson Pollock and Willem de Kooning.

Now, I’m not suggesting that you run out and buy individual paintings by the likes of Pollock and de Kooning. But you can still profit from the thriving market in art and collectibles, with a modest budget.

Rare coins are especially appealing now. They offer a mix of historical fascination with robust upside potential. Rare coins are among the world’s oldest collectibles. Their value is closely tied to the fluctuations of gold and silver, making them a superb hedge against inflation.

Rare gold coins occupy a special niche among gold-related investments. Their counterparts, rare silver coins, make up a smaller but also enticing market. Gold and silver prices have been on a tear this year and their rise should continue, as trade war and other geopolitical uncertainties spook investors.

If you’d prefer a simpler and more conventional play on this “high end” investment theme, consider LVMH Group (OTC: LVMUY). The company racked up total sales of EUR 46.8 billion in 2018, making it the world’s largest luxury group by revenue.

LVMH built a solid reputation for high-quality products coveted (and often collected) by consumers. LVMH operates more than 4,500 stores around the globe and is headquartered in Paris.

Uncertain global economic climates have not dampened the company’s sales, profits or stock price. Over the past 12 months, LVMH shares have appreciated 43.1% compared to a gain of 13.1% for the S&P 500 index (see stock price chart). 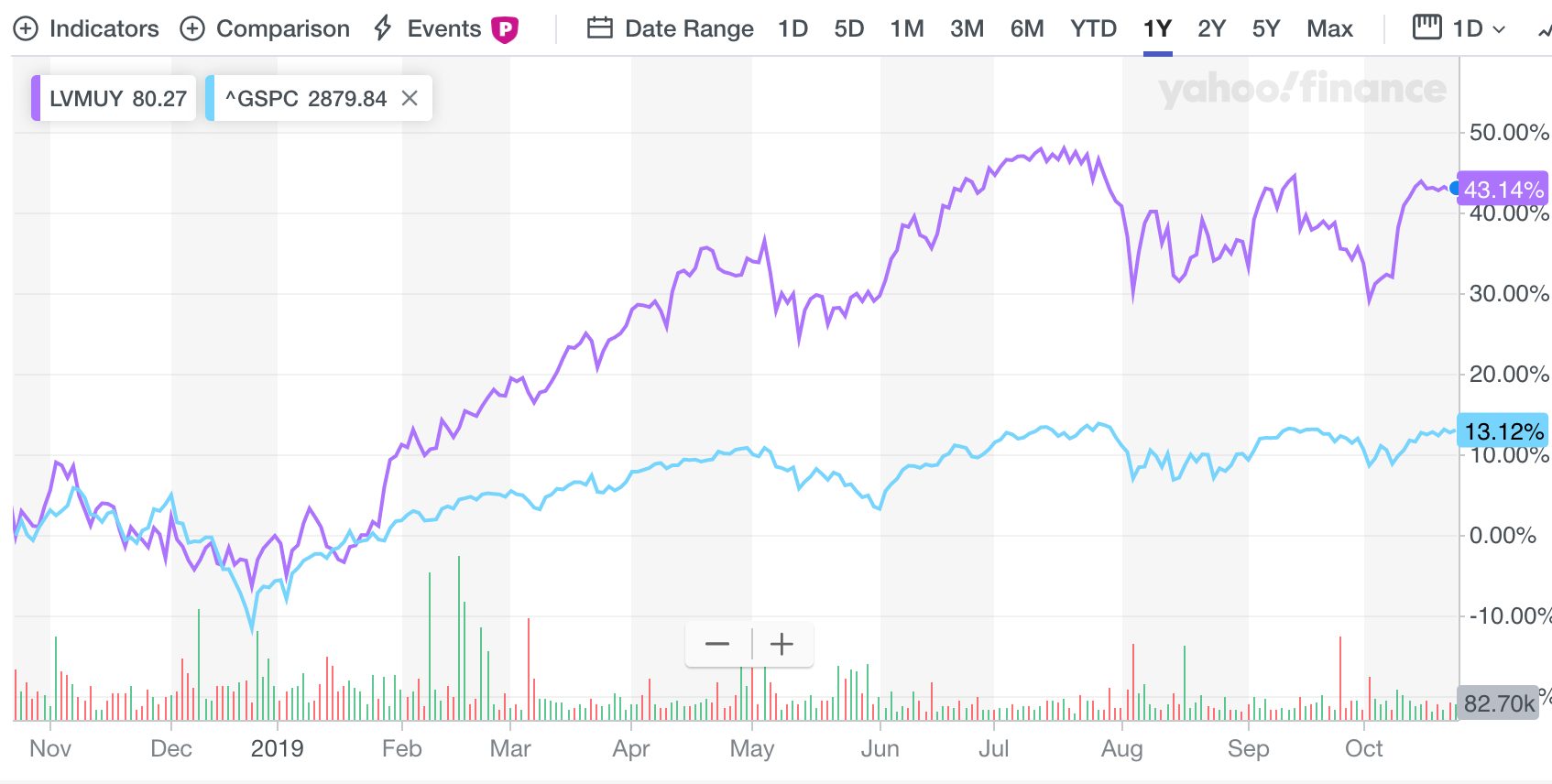 In the third quarter, revenue was up 17% compared to the same period in 2018. Organic revenue growth was 11%, a performance in line with the trend recorded in the first half of the year. Profit from recurring operations was EUR 5.2 billion for the first half of 2019, an increase of 14%.

This growth has been driven by strong demand in European, U.S. and Asian markets. Although these regions face economic uncertainty largely because of the trade war and the slowing economy in China, it did not stop their consumers from buying more luxury goods last year. The rich keep getting richer and all that money is burning holes in their pockets.

LVMH’s Louis Vuitton brand continues to be China’s most popular brand of luxury purses. Louis Vuitton already has established about one-third of its 539 global stores in China to cater to demand for its product and plans to open and expand more in coming months.

As a contingency against the Chinese public possibly growing tired of the product’s trademark monogram pattern, the firm has focused on new designs and reduced the pattern’s presence on 25% of its products.

The stock’s forward price-to-earnings ratio (P/E) of 22.9 isn’t too out of whack with the S&P 500’s forward P/E of 17, especially considering the company’s growth trajectory. The stock’s dividend yield of 2.13% is icing on the cake.

The upshot: If you’re looking for capital appreciation combined with emotional gratification, the collectibles/luxury market could be the route for you.

Editor’s Note: Maybe investing in collectibles and luxury goods isn’t for you. But market risks are mounting; you still need alternatives.

Jim is a seasoned investor who has devised a trading system that made him rich. Now, he wants to share his secrets. Jim can show you a fast, easy trade that pays off in a big way, every Thursday. It’s sort of like getting an extra paycheck.

Jim can point to scores of satisfied readers who made big money following his advice…and he can show you how to follow in their footsteps. If the above article has whetted your appetite for the good life, now’s the time to act.

Want to learn more? Click here for our presentation.