Mainstream Marijuana: Why Dispensaries Are Key

In growing numbers of cities and towns across North America, you can just walk through the door of a marijuana dispensary and casually buy pot, the way you can walk into the corner grocery store to buy granola and fruit or a pack of gum.

The marijuana boom will go bust for the weaker pot companies. The lasting action is among dispensaries. At the end of the day, marijuana is just a commodity. It’s a plant. There’s no great trick to growing marijuana or squeezing oil from its leaves.

The winners in the marijuana wars will be the shrewd business people who come devise a value-add or efficient business model. That’s why the operators of dispensaries stand out.

Cannabis dispensaries are local government regulated physical locations in which a person can legally buy marijuana and marijuana-related products for medical or recreational use.

I’ll explain more about dispensaries, below. First, let’s examine the tailwinds that are propelling marijuana into the consumer mainstream. As the following chart shows, big money is at stake. 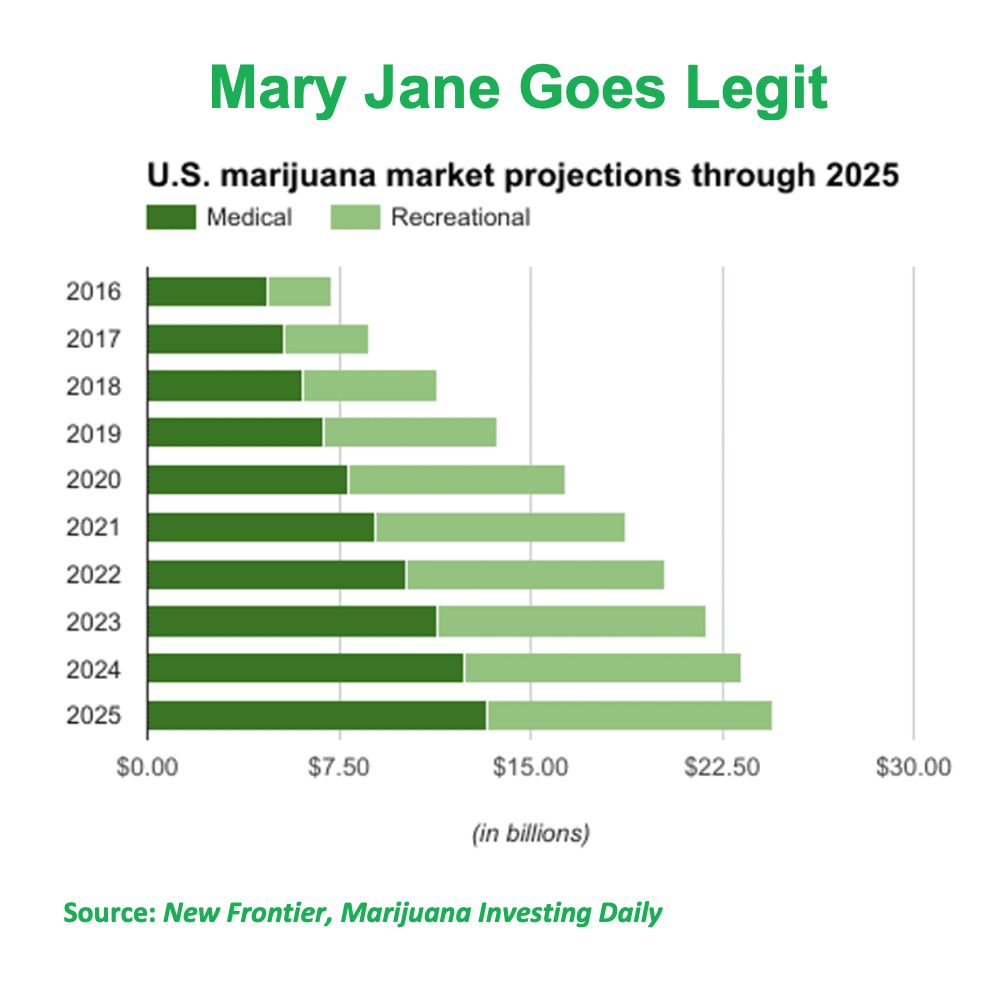 Medical marijuana is currently legal in 33 states and the District of Columbia. Recreational use is legal in 11 states and DC. Once considered an illicit activity conducted in back alleys, an increasing number of states are decriminalizing pot.

Notable case in point: New York Gov. Andrew Cuomo signed a bill in July that eases penalties for possessing small amounts of cannabis and enables the expungement of some past convictions.

After Aug. 27, the statewide penalty dropped to a $50 ticket for possession of under one ounce, or $200 for one to two ounces. The law also requires that records tied to low-level marijuana cases either be marked as expunged or destroyed. At least 24,400 people no longer have a criminal record due to the bill, according to New York’s Division of Criminal Justice Services.

A significant change is occurring on the federal level, with efforts to give marijuana companies better access to capital markets.

The House of Representatives in late September advanced a bill that would protect banks that service the cannabis industry from being penalized by federal regulators. Called the Secure And Fair Enforcement (SAFE) Banking Act, the legislation seeks to expedite the provision of financial services to cannabis companies by removing the fear of potential federal action against lenders. The bill is now in the Senate.

The marijuana retail dispensary market is seeking more capital because it’s getting more competitive, as cannabis becomes a legal and routinely available product. Marijuana has gone from counter-culture to consumer culture.

That’s why the marijuana dispensary sector is borrowing money and consolidating, as operators seek economies and scale and vertical integration. It’s a clear sign that the pot business is maturing. The winners will sport solid balance sheets and robust cash flow, as well as seasoned management.

The competitive edge will go to nationwide or regional dispensary chains that sell branded marijuana products. The better-funded chains are opening new stores at a rapid clip. They’re also gobbling up existing stores like Pac-Man.

Dispensary owners that open their retail outlets without gathering sufficient intelligence on state and local regulations risk a government crackdown that can wipe out their investment.

And remember, marijuana remains outlawed in the U.S. on the federal level. Increasing numbers of states are legalizing pot, but Uncle Sam still bans it. The feds have left it to the states to come up with their own laws regarding pot, which has created a crazy quilt of regulations.

But after weighing the pros and cons of marijuana dispensary stocks, I’m siding with the bulls. For starters, the normalization of marijuana laws represents an unstoppable trend. States and localities are becoming addicted to the tax revenue from pot and Congress knows this fact of life. Most lawmakers don’t want to end the tax revenue gravy train.

When investing in small- or mid-cap “disruptors,” red ink can be tolerated by investors over the short term, as long as revenue is rapidly growing and management is using the revenue to invest in future organic growth.

Many marijuana stocks have gotten clobbered lately, as investors come to realize that the industry is frothy. But you should see this pot sector swoon as a buying opportunity to pick up inherently sound marijuana dispensary shares on the cheap.

John Persinos is the editor-in-chief of Marijuana Investing Daily. Questions or comments? You can reach John at: mailbag@investingdaily.com