How to Beat the Earnings Shell Game

The high percentage of companies that are beating expectations this earnings season seems impressive, but it’s all part of the expectations game. Corporate managers habitually “game the refs” by low-balling forecasts, so they can more easily beat estimates and get a lift in share prices.

Below, I’ll pinpoint two sectors that are genuinely thriving in terms of earnings growth. They’re appealing places toward which you should gain greater exposure right now.

Meanwhile, the shell game continues apace. A company “wins” the game and enjoys a higher share price by posting unexpectedly positive numbers. But winning the game isn’t much use in predicting a company’s future competitiveness and cash flows.

According to research firm FactSet, so far about 40% of the companies in the S&P 500 have reported actual operating results for the third quarter of 2019. The percentage of companies reporting actual earnings per share (EPS) above estimates is 80% (see chart). 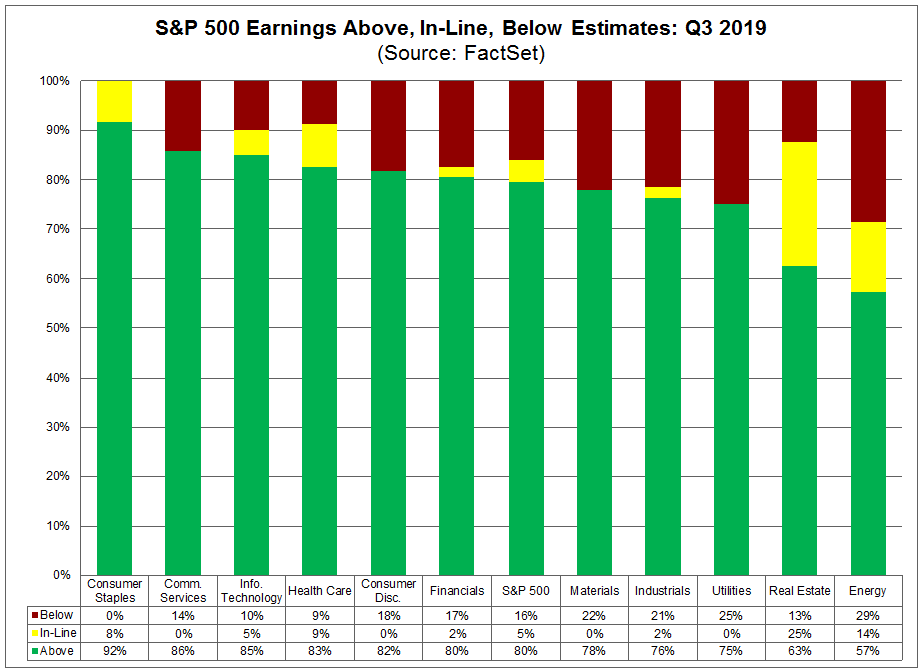 So does this mean that earnings will offset mounting risks and keep the bull market afloat? Not necessarily.

Equity valuations are high but we’re witnessing the third straight quarter of negative earnings growth. After a blockbuster earnings performance in 2018, earnings growth this year plummeted. Some of that pessimism was born of basic math. Year-over-year comparisons became more problematic, after the temporary boost provided to 2018’s earnings from the U.S. tax overhaul bill signed in December 2017.

Stocks have soared in recent days as earnings beat expectations, but some context is called for. According to the Harvard Business Review:

“Good earnings news can light a fire under a company’s stock, but if the company misses its number by even a penny, its stock is likely to get hammered. And many, if not most, senior executives have compensation packages tied to stock-price and earnings targets.

Both the paychecks and the reputations of securities analysts depend on accurately forecasting the quarterly earnings of the companies they cover. Investors, or at least traders, profit by correctly divining which companies will meet or exceed expectations and which will fall short. As for accounting firms, if they help a company meet its numbers—sometimes by ignoring, or even suggesting, some pretty dubious bits of bookkeeping legerdemain—then they can usually count on retaining the company’s lucrative auditing business and maybe pick up a consulting contract as well.”

The third-quarter earnings slowdown comes amid signs that a recession could occur within the next 12-18 months. According to a survey released yesterday by the National Association of Business Economists, only one-fifth of companies hired more workers over the past three months. That represents a seven-year low. According to the report:

“The U.S. economy appears to be slowing, and respondents expect still slower growth over the next 12 months. Higher tariffs are disrupting business conditions, especially in the goods-producing sector.”

Two sectors that stand out… 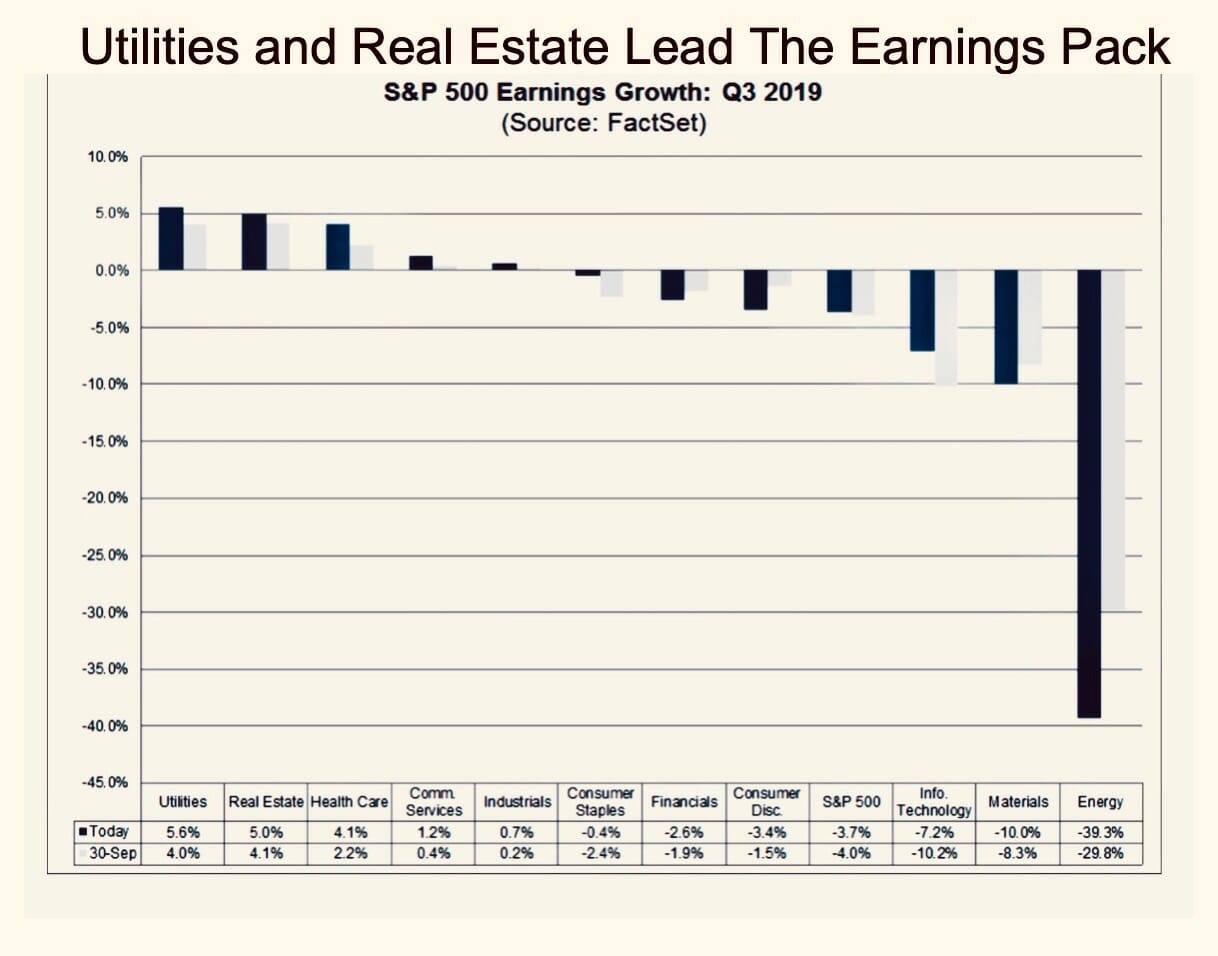 The Federal Reserve is expected to lower rates even further at the end of its Oct. 29-30 meeting. According to CME Group, probabilities based on federal-funds futures imply a 93.5% chance of a quarter-of-a-percentage-point rate reduction this week to a 1.50%-1.75% range.

President Trump has been lobbying the Fed to slash rates to zero or below, an extremely unlikely prospect. That said, there’s still wiggle room for the Fed to cut rates. The Fed’s benchmark short-term rate, the federal funds rate, currently stands at 1.75%, meaning it could fall another 175 basis points before hitting zero.

Utilities and real estate are capital-intensive and shoulder high debt levels, which means they benefit from lower borrowing costs as interest rates fall.

Utility stocks have been outperforming the broader market year to date, but you can still find bargains in this hot sector. For our latest “dividend map” of value plays in the utility sector, click here.

In real estate, there’s an under-the-radar investment opportunity right now that most investors don’t know about. Last year an obscure loophole allowed a handful of regular Americans to take back over $6.6 billion of the mortgage payments they made. Click here for details.

Meanwhile, investors this week found renewed hopes that current trade negotiations will score a breakthrough. Sorry to be a downer, but I’m not buying it. President Trump has decided that protectionism is a winning issue with his political base, which makes a trade truce unlikely before the 2020 election. For their part, the Chinese are clearly stalling for time, convinced that they’ll probably face a different president in 2021.

When it comes to trade, Wall Street reacts in knee-jerk fashion to every presidential press release or tweet. Just make sure that you don’t do the same. Ignore the trade war propaganda from Washington and Beijing. And remain wary of the “better-than-expected” earnings shell game. Separate the hard data from the self-serving spin.

John Persinos is the managing editor of Investing Daily as well as the premium trading service Utility Forecaster. Questions or comments? You can reach John at: mailbag@investingdaily.com