Three pivotal events loom large for investors: the Federal Reserve’s policy meeting today and tomorrow, the European Central Bank’s (ECB) meeting Thursday, and the British national election, also on Thursday. The outcomes will greatly influence the direction of stocks for the rest of 2019 and into 2020.

At the same time, global economic indicators are weakening and the trade war is accelerating. Maybe the bulls should stop drinking the Kool-Aid and start hitting the eggnog.

U.S. long-dated Treasury yields also fell Monday, after climbing for three consecutive days, as investors lost their appetite for risk in the wake of weak trade data from China and anxiety over a fast-approaching tariff deadline.

The Trump administration has indicated that it wants to see “movement” from China to avoid implementing 15% tariffs on $160 billion worth of Chinese imports. In my view, the likelihood of a concession from Beijing is close to zero.

Slated to take effect December 15, the tariffs would affect clothing, decorations, electronics, smartphones, toys, and sports gear. Holiday shoppers are about to get “Scrooged” with higher costs…just in time for Christmas.

Read This Story: Will Investors Find Coal or Profits in Their Stockings?

As of this writing on Tuesday morning, all three main U.S. stock indices were bouncing between red and green. The Dow was down about 100 points, before clawing its way back in choppy trading. Investors are losing their holiday spirit, as the news turns negative.

The Chinese government reported today that China’s consumer price index surged by 4.5% in November, the quickest growth rate since January 2012 and faster than market expectations. That’s a pronounced acceleration from a 3.8% jump in October. Rising pork prices are mostly to blame.

At the same time, the long-running trade war continues to hurt manufacturing activity in major economies around the world, especially in China.

China’s exports in November contracted for a fourth consecutive month, Beijing reported this week. Overseas shipments fell 1.1% last month from a year earlier, compared with a 0.9% drop in October and a consensus forecast of a 1.0% expansion.

Geopolitical risk has been heating up in recent days, with violent street protests in Hong Kong and North Korea launching new long-range missiles.

The “bromance” between President Trump and North Korean strongman Kim Jong-un appears to be cooling. Kim on Monday called Trump a “heedless and erratic old man.” Meanwhile, televised impeachment proceedings against Trump are unfolding in Congress, with both parties bitterly divided and digging in their heels.

Neither the Fed nor the ECB are expected to announce changes in their respective monetary policies this week, but amid the uncertain backdrop I’ve just described, central bankers could still throw us a few curve balls.

Send in the bulldozers…

Polls give Johnson the edge, but they’ve been wrong before. Regardless of who wins, Britain’s departure from the European union (aka Brexit) is generating a major headwind for British, European and global growth.

There’s the chance that neither party will get a sufficient majority to rule in Parliament, which would fuel uncertainty, increase the odds of a no-deal (or “hard”) Brexit, and grease the skids for another Scottish independence referendum. Britain has lost most of its empire. Is Scotland next? Somewhere, Russian President Vladimir Putin is smiling.

The following chart shows the damage that a hard Brexit would impose on the U.S. and European economies: 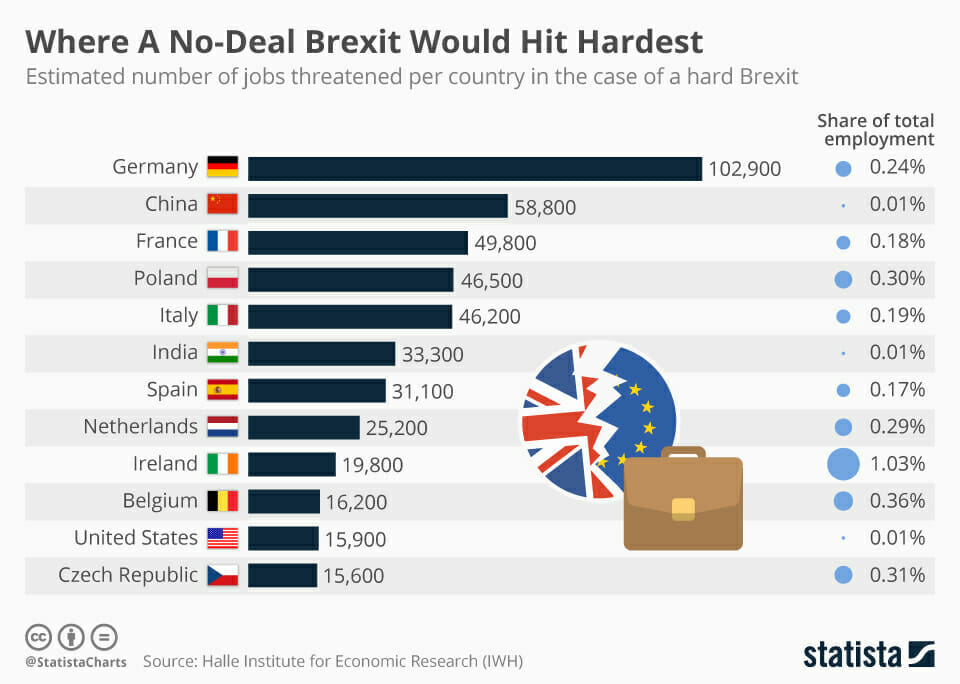 Under a hard Brexit, business investment and economic growth would suffer, which in turn would weigh on global equities.

Boris Johnson is an anti-immigration, pro-Brexit hardliner often referred to as the “British Trump.” Johnson has stoked investor fears with his unpredictable and confrontational style.

Johnson stated today that if the voters return him to power, Britain can “rip up the EU rule book and write a new one for ourselves.” Johnson added: “It’s time to send in the bulldozers and smash through the gridlock.”

As an investor, how should you navigate these make-or-break events?

For starters, consider major European-based consumer staples companies that boast international diversification. These makers of well-known brands tend to perform well during periods of political and economic shock. Consumer staples stocks also outperform during the late stage of economic expansion, which is where we find ourselves now.

You should also consider U.S.-based aerospace/defense firms. Britain is home to major contractors in this sector that will get hammered by Brexit. These companies ordinarily would enjoy boom times as global defense budgets rise, but Brexit will prove a major impediment to their top and bottom lines, as customers turn to competing companies outside Britain.

U.S.-based aerospace/defense companies are poised to pick up the defecting buyers. I especially like small-cap U.S. defense firms with greater room for growth, in booming specialty industries such as electronics.

In consumer staples, aerospace/defense, and automotive manufacturing, Britain’s loss will be America’s gain.

The next few days should prove momentous for the rest of the year. If you think we’re home free for 2019, I suggest you dig up the painful memories of December 2018.

In this nerve-wracking investment environment, there’s another place to turn: marijuana. Not as an alternative to eggnog, but as an investment.

The increasing legalization of recreational and medicinal marijuana is one of the biggest business trends unfolding today. Pot is becoming a multi-billion dollar industry, with profound implications for consumer society.

If you’re looking for turbo-charged marijuana gains, click here for our presentation.