As January looms on the calendar, I’m reminded that the month is named for the Roman god Janus. In ancient Roman myth, Janus is the god of beginnings and endings. He is depicted as having two faces, because he simultaneously looks to the future and the past. Janus is the god of time, gates and passages.

Let’s take a look at the stock market’s recent past and see what it portends for 2020. Will the past serve as prologue? In other words, will history set the context for the future?

So far, the omens are promising. U.S. stocks last week reached new highs after investors received clarity on two issues, Brexit and Federal Reserve monetary policy. Conservative Boris Johnson trounced Labour Party candidate Jeremy Corbyn in the national British election and the Fed indicated that it would stand pat on interest rates this month and into the foreseeable future.

Less clear was the much-anticipated “phase one” trade deal announced by the U.S. and China, which includes agricultural purchases and limited tariff roll-backs.

Despite the positive spin from its defenders, the phase one trade deal is not a great victory for the U.S. The Chinese have conceded nothing of substance; they’re essentially returning to where they began. They’re buying agricultural products from the U.S. in return for selling our country sophisticated manufactured goods. A lot of reporters in the media are cheer-leading for the phase one deal, but of course, they don’t know what’s really in it. They’re simply regurgitating government press releases.

Stocks seesawed Friday in the wake of the phase one announcement but eventually closed the week in positive territory (see chart).

Inflation remains low, which provides the Fed with the elbow room to maintain its accommodative stance in 2020 if the economy takes a dive. Headline risk will continue to keep investors on edge throughout the coming days and into 2020. However, the market’s solid performance this year underscores the importance of sticking to your long-term investment goals.

President Trump’s imminent impeachment, the mess of Brexit, and red flags among economic data continue to vex investors. But the fact is, the entire decade is positioned to end in positive territory. Over the past 10 years, the S&P 500 index has generated a total return of nearly 250%.

It’s foolhardy to attempt a prediction about the stock market’s performance in the next year or decade. But several trends indicate that investors enjoy tailwinds.

In particular, the U.S. is on the cusp of widespread deployment of 5G ultra-fast wireless networks. This deployment will accelerate in 2020, lifting the technology sector and changing our way of life as demand booms for handheld gadgets and chips that provide greater memory.

One of the surest ways to profit over the long haul is to pinpoint a small, unknown entrepreneurial start-up with a lock on proprietary capabilities and invest on the ground floor, before the herd discovers the firm and bids up the share price. Along those lines, our investment team has discovered a small-cap stock involved in 5G that’s positioned to explode on the upside. To learn the details, click here for our report.

The lessons of the past…

We’ve enjoyed a nice bull run, but the laws of economic cycles have not been repealed. For example, a recession in the early 1990s transitioned to an economic boom fueled by the Internet revolution. 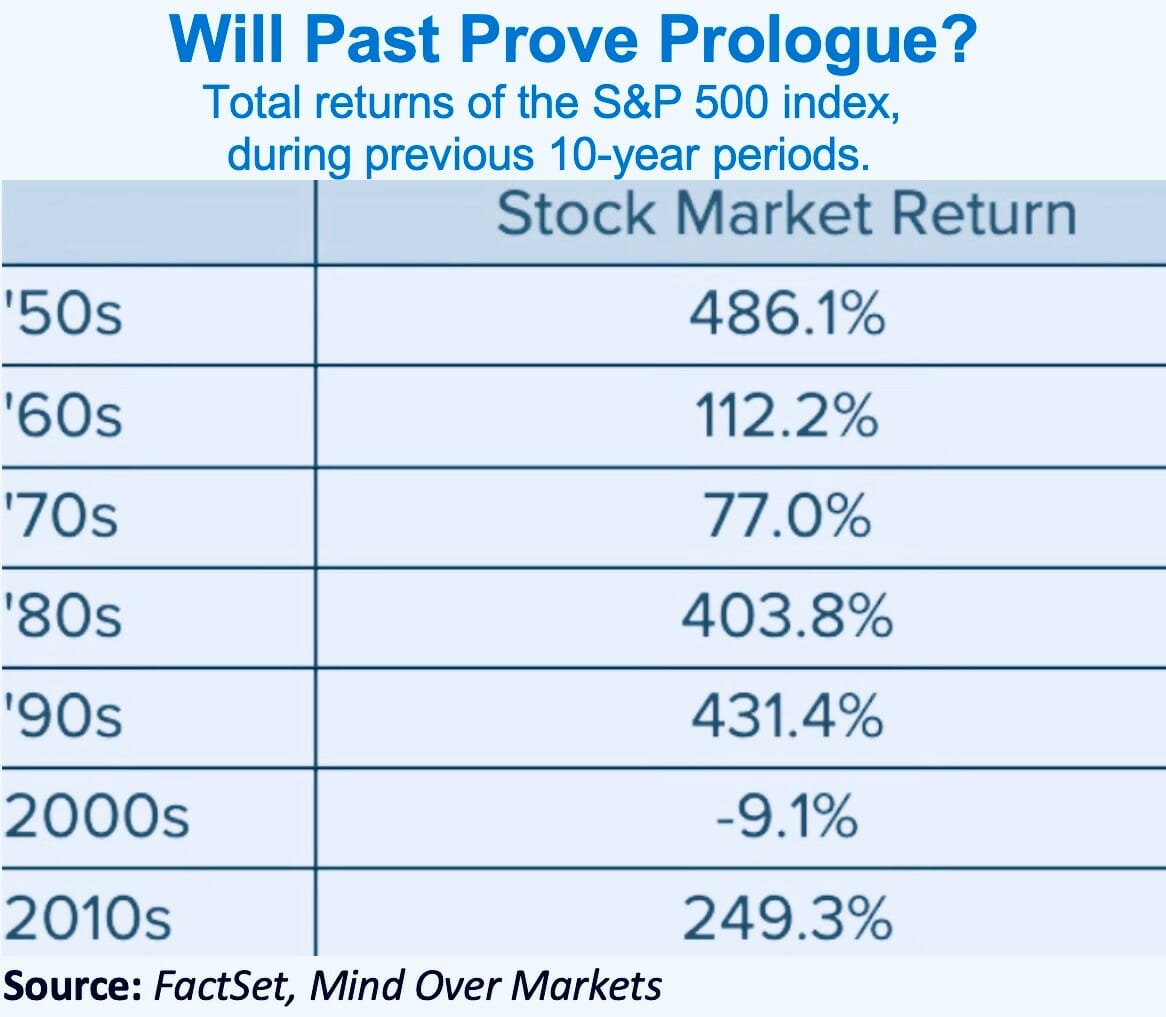 Over the long haul, stocks have rewarded investors. But it’s time to get cautious. I suggest you increase exposure in your portfolio to defensive stocks that offer growth, income and stability. Dividend-payers fit the bill.

Read This Story: Low Volatility Stocks for Peace of Mind

With January on the horizon, you’ll be hearing a lot of predictions. Take the soothsayers of the media with a huge grain of salt. The conventional wisdom is often way off the mark. Donald Trump was supposed to lose in 2016. Wrong. When Trump unexpectedly eked out an Electoral College victory, his presence in the White House was supposed to tank the markets. Wrong. The year 2019 was supposed to usher in a recession. Wrong.

The fatuous taking heads on TV are bad for your portfolio. They make predictions that often turn out to be laughably inaccurate, but they’re never held accountable. Their failed predictions are quickly forgotten. And if they happen to get something right? As my grandfather used to say, even a blind hog finds an acorn every once in a while.

The year 2019 is on track to end on a high note, but as we head into 2020, dangers are mounting. China, the growth engine of the global economy, is slowing. Germany, the locomotive of the European economy, is contracting. Brexit has reduced once-proud Britain to a clown show. Overhanging these woes is the trade war, which is far from over.

In recent weeks we’ve witnessed phony truces in the trade war that temporarily drive up stocks, but when more closely examined these trade “breakthroughs” are exposed as PR stunts to placate investors. This cause-and-effect, whereby tweets move markets, has generated volatility (and perhaps insider trading).

Ignore the partisan noise, follow the hard data, and stick to your goals.