Here’s The Real Reason Behind The Market’s Rally

After posting a negative return in 2018, the stock market roared back to life this year. Through December 18, the S&P 500 Index was up 27% year-to-date. That is almost three times its average annual return of 10%.

Some of this year’s gain is due to the horrible ending to the previous year. Last December, the index dropped more than 9%. Some bounce back this year was to be expected. 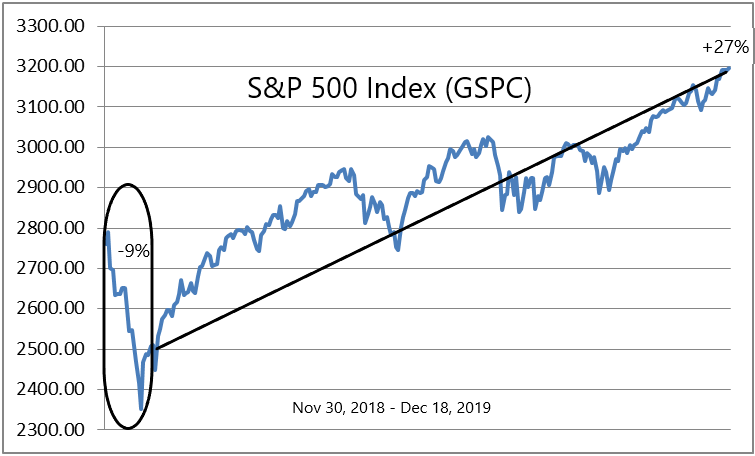 However, recent strength in the stock market suggests something much bigger than a simple reversion to the mean is at work. You will not find the explanation for it in the headlines dominating the nightly news crawl:

None of those things is good for the stock market. If anything, you might expect stocks to take a dive based on just those three data points.

Of course, I have not yet mentioned the elephant in the room. This month’s impeachment proceedings will only serve to accentuate the dysfunctionality of our political system.

That being the case, for what possible reason is the stock market so giddy these days?

I think I know what it is, and if I’m right there could be a lot of money to be made in a handful of stocks next year.

Regardless of where you fall on the political spectrum, there are two likely outcomes to the impeachment trial:

Constructive is the operative term. Most legislative accomplishments, though important, are difficult to quantify.

For example, it seems likely that the House of Representatives will soon approve the United States-Mexico-Canada Agreement (USMCA). If passed, the USMCA will have profound economic implications for many industries in all three countries.

But ask someone (other than a dairy farmer) how passage of the USMCA will affect their personal financial situation and all you’ll likely get is a blank stare. It may be years before we really know who the winners and losers are, and that won’t help a politician running for reelection 11 months from now.

What will help politicians from all parties running for reelection is a huge infrastructure spending program that pumps money into their state and local economies. Even if that money is not spent next year, just knowing it is coming soon will win them a lot of votes.

They’ve been talking about it ever since President Trump took office, so why do it now? Two reasons: this is an election year and an infrastructure bill is the only thing both parties can agree on.

As you may recall, they almost made a deal eight months ago to spend $2 trillion on infrastructure. However, that deal quickly fell apart when it became apparent it would not get funded.

This time is different. If the USMCA is passed into law in January as expected, Trump’s primary requisite for negotiating an infrastructure bill will be met. At the same time, Democrats will have no further recourse for removing Trump from office once the impeachment trial is over.

Whether they like it or not, reviving last year’s attempt at a multi-trillion dollar infrastructure party behooves lawmakers on both sides of the aisle. I think it’s going to happen, perhaps as soon as February.

If I’m right about that then you need to act fast. Some of the more obvious infrastructure stocks are already creeping up in value. Since October 1, shares of construction machinery manufacturer Caterpillar (NYSE: CAT) have gained 18%.

There should be plenty of trickle-down money sloshing around the economy, too. That’s one reason why railroad operator Kansas City Southern (NYSE: KSU) has gained 19% over the past ten weeks.

However, the iShares U.S. Infrastructure ETF (IFRA) is up only 5% over the same span. That means there are still plenty of construction companies to buy at fair prices.

Of course, there may be no infrastructure spending bill at all next year. In that case, it may be difficult for most large-cap stocks to make much headway. There is one group of stocks that should do well regardless of how the overall market is performing.

I’m referring to the marijuana industry, aka “the green rush.”

There’s an under-the-radar law quietly zipping through Congress. It’s known as the Secure And Fair Enforcement (SAFE) Banking Act and it flips the entire marijuana industry on its head.

The SAFE Act seeks to expedite the provision of financial services to cannabis companies by removing the fear of potential federal action against lenders. When the law passes, certain cannabis stocks will soar.

For our report on the best-positioned pot plays, click here now.