By any measure, the past decade was exceptional for the stock market. Over the last 10 years, the SPDR S&P 500 ETF (SPY) gained 253%. That equates to a compound annual growth rate (CAGR) of 13.5%, roughly 35% above its long-term average.

Of course, some sectors performed even better than that. Over the same span, the Technology Select SPDR Fund (XLK) returned 370% for a CAGR of 16.7%. At the other end of the spectrum were oil stocks, as evidenced by the paltry 38% increase in the Energy Select Sector SPDR Fund (XLE). That works out to a CAGR of only 3.3%.

As bad as that sounds, there is another group of stocks that performed even worse than the energy sector: commodities. Over the past 10 years, the Fidelity Global Commodity Stock Fund (FFGCX) gained just 3% in total! 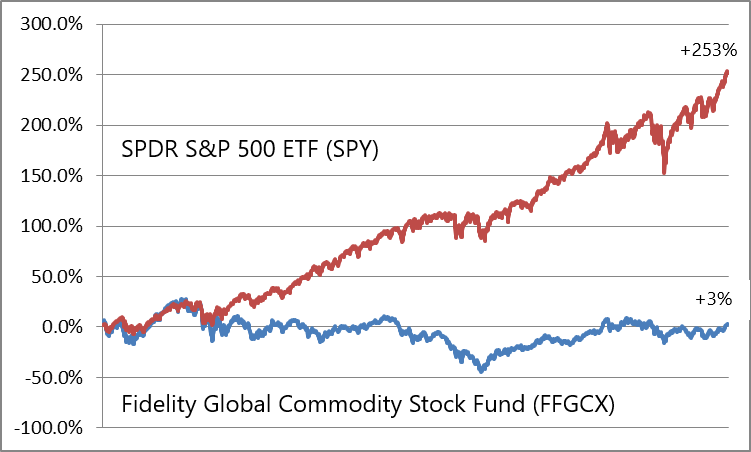 Despite its poor performance over the last decade, I like this fund and believe it is very well managed. In fact, I use it as an inflation hedge in the Personal Finance Fund Portfolio. More importantly, I believe this investment is poised to deliver outstanding results over the next 10 years for reasons explained below.

If you aren’t familiar with it, this fund’s portfolio is divided evenly among companies in the energy, agriculture, and mining industries. For that reason, the prices of oil, wheat, and gold have the biggest influence on its share price.

Therein lays the explanation for this fund’s inability to make much headway over the past 10 years:

Of course, the past decade witnessed historically low inflation as the global economy recovered from the Great Recession of 2008-2009. Central bankers around the world slashed interest rates and pumped money into their respective economies to avoid a depression.

Fortunately, those efforts appear to have worked. Here in the United States, unemployment is low and wages are now growing at a faster pace than inflation. During the fourth quarter of 2019, wages grew at better than 5% while the consumer price index (CPI) increased by less than half that amount.

That’s good news for the economy, but it may also portend a reversal in commodity prices. When consumers have more money to spend they bid up the prices of the items they want the most.

We’re already seeing that in the real estate market. According to Zillow, the median home value has increased by 3.8% during the past year, about twice the rate of inflation. Automobile prices are also on the rise.

And that’s just here in the U.S. Bear in mind that over the next decade, China and India are expected to add one billion middle-class consumers to the global economy.

Roughly 15% of the world’s total population will have a lot more money to spend on better food, nicer cars, and pricey jewelry. That should translate into increasing demand for agriculture, oil, and gold.

I know what you’re thinking. Over the next 10 years, most cars will be electric, so demand for gasoline will drop. In fact, a recent study by JP Morgan (NYSE: JPM) estimates that by 2025, roughly 30% of all new vehicles sold will be either electric or hybrid.

However, that means 70% of new car sales will be powered by traditional combustible engines that run on gasoline. In addition, approximately 90% of the cars already on the road will also be powered by gasoline.

As for gold, there are three factors that tend to drive up its value in addition to its commercial applications: geopolitical instability, currency crises, and inflation fears. I believe the next decade will see a spike in all three of those elements as well.

The easy way to participate in higher commodity prices is to own a fund such as this one. It is heavily diversified with broad exposure to the entire commodity market.

The riskier way to go after higher returns is to own individual stocks that are highly leveraged to commodity prices. For that matter, there are ETFs that directly own commodities such as oil and gold.

Either way, a big rise in hard asset prices should cause almost all commodity investments to appreciate in value. But if that sounds too risky for you, I know of a less exotic way to earn big returns in the years to come.

For our “dividend map” of the best utilities stocks to buy, click here now. These companies are cash cows that generate juicy double-digit yields, year in and year out. If you’re looking for sleep-well-at-night investments, our dividend map is for you.