A friend recently hit me up for free investment advice: “Shouldn’t I move my 401k plan entirely into stocks since this is a presidential election year? I heard the stock market always goes up when there is an incumbent in the White House running for reelection.”

I told him: “Not necessarily.” Below is my reasoning.

My friend’s theory is based on the belief that a politician running for office won’t take actions to hurt the economy. There’s a kernel of truth to that theory. Going back to 1948, the first presidential election year after World War II, there have been 18 general election years through 2016. Among those, 14 have resulted in a positive return for the S&P 500 Index (see chart). 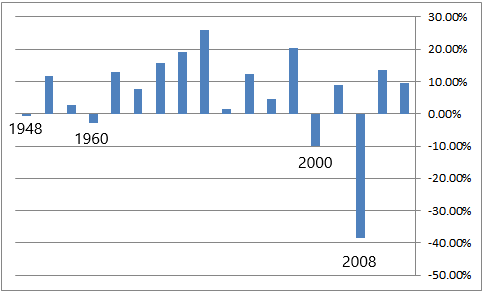 The slight improvement in probability is offset by a bigger decline in the average return of stocks during election years. During those same 18 election years, the S&P 500 gained an average of 6.3%. That is 37% less than the 8.8% average return for the index over all 69 years within that same span.

Proponents of election year theory say 2008 skews the averages. That year, the S&P fell 38% as the housing market collapsed. If you eliminate that one year from the calculations, they argue, then election years outperform the average year.

But there’s a wild card this year: President Trump’s impeachment.

President Andrew Johnson was impeached by the House in 1868, which is too long ago to serve our purposes here. In addition to Johnson, only two other presidents in U.S. history have been impeached: Bill Clinton and Donald Trump.

Richard Nixon was never impeached. In 1974, the House Judiciary Committee recommended the impeachment and removal from office of Nixon for various crimes. Impeachment in the House was certain, as was conviction in the Senate, so Nixon resigned. During the Watergate scandal, the S&P 500 fell 14.7% in 1973 and fell another 26.5% in 1974.

President Clinton was impeached and acquitted in 1999. That year, the S&P 500 gained 19.5% but over the next three years lost nearly half its value.

However, macroeconomic factors existed during those two periods beyond the direct influence of politics. The OPEC oil embargo of 1973 is largely blamed for the following year’s stock market swoon. Speculation in “dot-com” stocks during the late 1990s set up the market for a collapse starting in 2000.

Will Trump’s impeachment affect stocks? Hard to say. But regardless of historical precedent, each election year brings its own set of circumstances that determine how stocks will perform. Don’t make investment decisions based on theories that may reflect statistical randomness.

Instead, turn to proven investment methods, such as those used by my colleague Dr. Stephen Leeb.

Dr. Leeb is the chief investment strategist of Real World Investing and The Complete Investor. Among his many specialties is commodities, an asset class that he thinks is poised to soar this year.

In particular, Dr. Leeb is bullish on copper. By his calculations, the price of copper going out five or more years will be far higher than almost anyone expects. And that’s great news for the best-situated copper producers.

Copper is a crucial commodity. The industrial world can’t function without the “red metal.” And right now, the world is running on a mere 10-day supply of copper reserves.

When the supply of a commodity we need is shrinking…and demand is exploding…prices are primed to skyrocket. Want to score market-beating gains? Click here for Dr. Leeb’s latest copper play.