This week got off to a rough start for investors. An outbreak of a “coronavirus virus” in China over the weekend sent the stock market tumbling. Monday morning, the S&P 500 Index opened 1.7% below last Friday’s close.

I believe the market is overreacting. Below, I’ll explain how you can profit from this herd mentality. But first, a quick explanation of what the buzz is all about.

A coronavirus infects the nose, sinuses, and upper throat. Usually, it does little harm other than causing a case of the sniffles. However, the latest version of the virus is much more severe. It causes pneumonia that has resulted in over 300 confirmed fatalities.

Although the virus originates in animals, it can be passed from an infected person to other people. Fear that the virus could quickly expand into a global pandemic pushed oil prices down more than 2%.

Closed factories in China equates to decreased commerce, and less demand for energy, just about everywhere else in the world. Already, some economists estimate that the outbreak could erase more than 1% of China’s gross domestic product (GDP) in 2020.

That’s possible, but unlikely unless efforts to contain the virus are unsuccessful. Already, the Chinese government has imposed travel restrictions and quarantined an entire city. Residents in affected areas are encouraged to wear safety masks when in public and avoid mass transit.

At the same time, outbound flights from China are closely monitored for any signs of infected passengers. A handful of cases have been reported in the United States, but thus far there have been no fatalities on these shores and the virus does not appear to be spreading.

This sequence of events is eerily similar to the Ebola crisis in October 2014. That episode quickly drove the stock market down 8% in less than a week. But the market fully recovered less than two weeks later after it became apparent that the outbreak had been contained. 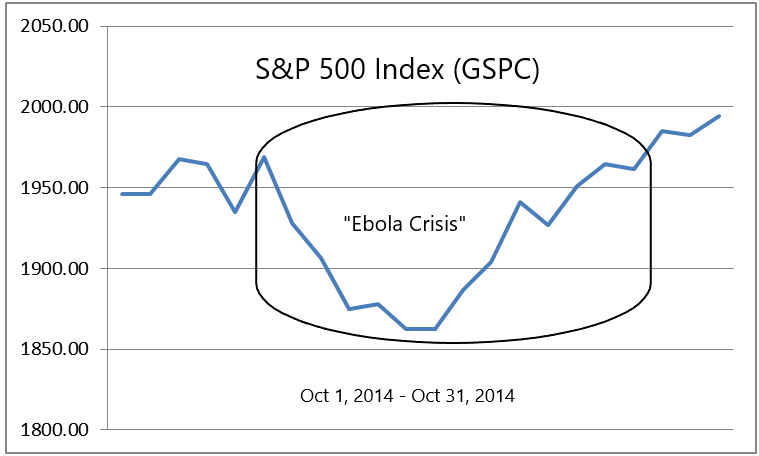 I don’t expect this outbreak to subside as quickly as that one. Wuhan, the city in China where the outbreak began, is heavily populated with more than 11 million residents. The 2014 Ebola outbreak started in a small West African village with limited access to the rest of the world.

The mayor of Wuhan estimates that as many as five million people traveled through the city in the weeks leading up to the travel ban. With an incubation period of up to two weeks, some of those people may only now begin displaying symptoms of the virus.

That timing is particularly unfortunate for the stock market. Starting this week, hundreds of big companies will be releasing their fourth quarter and year-end results. Normally, forward guidance for the coming year is also provided.

It is too soon to accurately quantify the impact of the coronavirus on the global economy. For that reason, I suspect most companies will either withhold guidance or defer it until a clearer picture emerges. The companies that do include guidance now may feel inclined to tone down their estimates to avoid disappointing investors later on.

With most of the major stock market indexes hitting record highs recently, it won’t take much to trigger a quick correction. A second wave of reported cases of the coronavirus combined with disappointing quarterly reports and/or reduced guidance from a few influential companies could be enough to send stocks into a quick decline.

Be Prepared to Act Fast

If the coronavirus does trigger a correction, be prepared to act fast. Once the program trading algorithms kick in, high-quality value names will be sold off just as indiscriminately as grossly overvalued momentum stocks.

That probably won’t last long, perhaps days or weeks as with the 2014 Ebola panic. Just long enough to rebalance equity exchange-traded funds to properly reflect each company’s relative weighting within the index.

That will be your time to act. The hardest time to convince yourself to buy stocks is when everyone else is selling them. More often than not, that usually turns out to be the best time to buy them.

Don’t know which stocks to buy? Earlier this month, I discussed my expectations for 2020 including which sectors should perform best. To summarize, I expect energy, materials, and health care to be among the top-performing sectors this year.

In particular, the health care sector could be a major beneficiary of the coronavirus outbreak. Even if the coronavirus proves as short-lived as the Ebola epidemic of 2014, it should focus attention on biotech companies developing cutting edge cures for disease and illness.

Editor’s Note: Our colleague Jim Pearce just put a spotlight on the biotech sector and the relentless quest to cure deadly outbreaks such as the coronavirus. Companies with novel treatments will win the race…and enrich early investors.

Which brings to mind the medical marijuana industry. That’s right, marijuana. The legalization of medicinal and recreational cannabis continues apace, with biotech firms devising cannabis-derived drugs that can treat various ailments that have resisted conventional therapies.

The stocks of these marijuana biotechs are poised to go through the roof, as human society continues to grapple with diseases and pandemics. For the latest investment opportunities in medical marijuana, click here for our report.