Stocks: Bubble In Search of a Pin?

Snap quiz. Who said the following:

Well, think again. It was Fed Chair Alan Greenspan, testifying in front of Congress in December 2000. And instead of going up and up and up, as Greenspan predicted, the market that year fell and fell and fell. And then fell some more.

We’re witnessing similar complacency today. Earnings growth has stalled but the bulls argue that it doesn’t matter. I’m usually an optimist, but I think we probably face a correction sometime this year. Below, I’ll show you how to protect your portfolio and still make money. But first, let’s review the past week.

More fuel for the rally…

Also cheering investors was China’s announcement Thursday that the country would slash tariffs on $75 billion worth of imported U.S. goods. The S&P 500 dipped last week due to lingering coronavirus fears, but all three main U.S. stock market indices have racked up solid gains so far this year (see table below).

We’re probably witnessing a “melt-up,” a bout of excessive speculation that marks the end stage of an asset bubble. A melt-up is typically followed by a significant downturn. 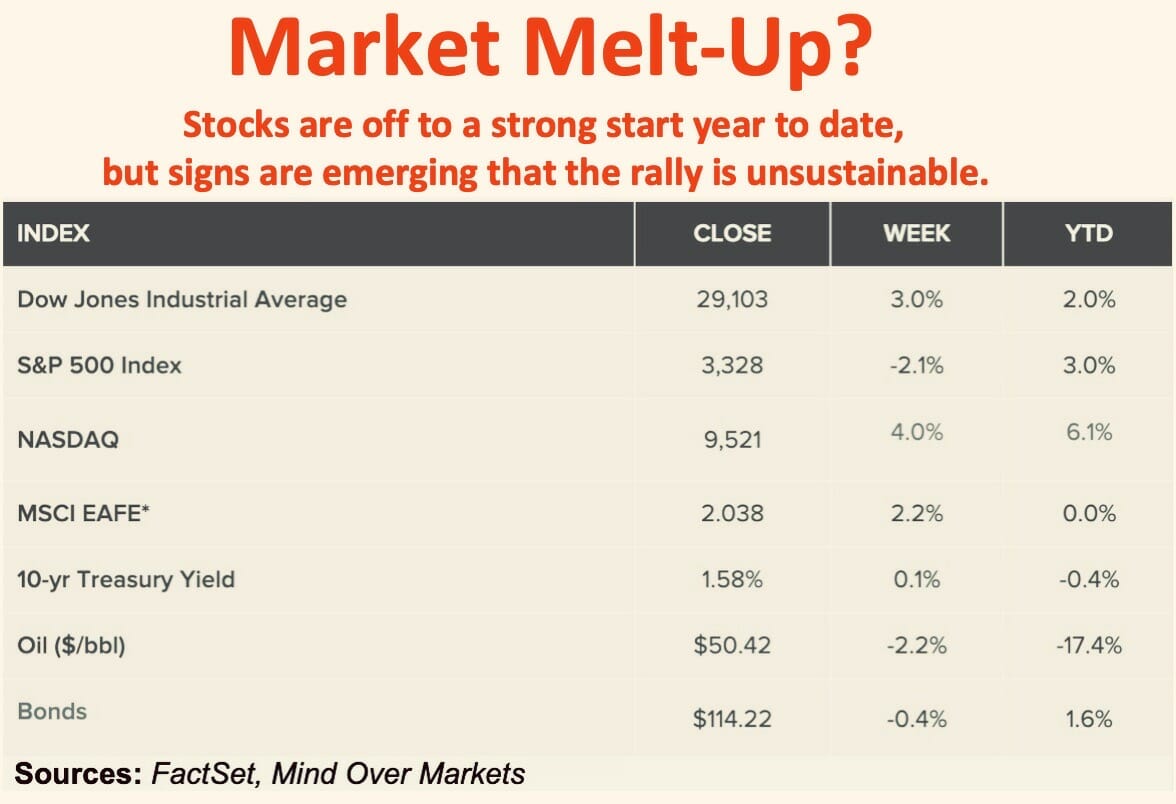 The bulls are conveniently disregarding the disconnect between weak corporate earnings and high valuations. To be sure, fourth-quarter 2019 earnings are coming in slightly better than forecast. According to research firm FactSet, the blended earnings growth rate for Q4 is 0.7%, which is above the earnings decline of -0.5% last week. However, flat growth is hardly a reason to pop the Champagne.

Read This Story: A Tale of Two Markets

The trade war is far from over. Despite the political theatrics over the phase-one Sino-American trade deal, many onerous tariffs remain in place and continue to dampen earnings growth. These tariffs also undermine international trust.

Then there’s the coronavirus that’s still rampaging through China. The epidemic will eventually end, of course, but in the meantime don’t underestimate the damage that the influenza-like illness can wreak on the global economy and financial markets.

The closest example to the coronavirus outbreak is the severe acute respiratory syndrome (SARS) epidemic in China in 2003. SARS resulted in 774 deaths in 17 countries. Over a six-month period between the reporting of the first SARS cases and the last reported case, the S&P 500 declined by 3.4%.

The S&P 500 bounced back from SARS fairly quickly. However, China’s economy in 2003 represented about 4% of the world’s gross domestic product. China now makes up 16% of global output and the country is even more interconnected with global supply chains.

Read This Story: Coronavirus: How Bad Can It Get?

The death toll from the coronavirus epidemic rose to 908 on Sunday, as 97 more fatalities were recorded. Oil prices are getting clobbered, while safe havens such as gold are rising. Reported infections could only be the tip of the iceberg.

The numbers don’t add up…

The father of value investing, Benjamin Graham, famously said: “Buy not on optimism, but on arithmetic.” Under current conditions, the arithmetic can’t accommodate an overvalued equity rally based on expectations that corporate profits will climb faster than gross domestic product. Meanwhile, triggers for a correction (e.g., the coronavirus) abound.

The long bull run has continued this year, but the laws of economic and market cycles have not been repealed. Consider the dot-com boom and bust, which served as the context for Greenspan’s remarks as noted above.

The frenzied stock market speculation of the dot-com bubble occurred roughly from 1994 to 2000. The NASDAQ composite peaked in value in March 2000 then crashed. The long subsequent decline in stocks lasted from March 2000 to October 2002, during which time $6.2 trillion in household wealth was wiped out. That’s trillion with a “t.”

It wasn’t just Greenspan who got things wrong about the 2000 crash. Many pundits and officials were blindsided, too. In February 2000, Larry Kudlow, who was a CNBC host at the time, said: “This correction will run its course until the middle of the year. Then things will pick up again, because not even Greenspan can stop the Internet economy.” Oops. (If you ever want to lose money, simply follow the financial advice you hear on cable television.)

So how should you trade now? Stay invested, but avoid aggressive risk-taking. Here’s a prudent portfolio allocation under current conditions: 50% stocks, 25% hedges, 15% cash, and 10% bonds. About 5%-10% of your hedges portion should be precious metals such as gold and silver. Other hedges include commodities and agriculture-linked investments.

The good news about a stock market sell-off is that not every investment goes down with it. That’s why I’m keen on companies involved in the global roll-out of 5G wireless technology.

5G-related plays are making early investors rich. One of the most appealing aspects of 5G investments is their resistance to economic cycles and market ups and downs. Experts estimate that 5G will eventually add $3.5 trillion to the U.S. economy. For our white paper on the best 5G investments, click here.

5G companies aren’t living on hype. They’re making big profits, now and well into the future. These days, the faux economists on financial television are trying to tell us that weak corporate earnings growth doesn’t matter. During the dot-com bubble, a lot of folks were saying the same thing. Bedazzled by the rise of the Internet, they indiscriminately threw money at companies that were deeply in the red. They lost their shirts. Stay selective and you’ll get to keep yours.