The “3 Bucket” System for a Successful Retirement

While on vacation in Florida last week I dropped in on a former client who was celebrating his 80th birthday. He took an early retirement package 25 years ago at the age of 55. At the time, he wasn’t sure if he had enough money to see him all the way through retirement.

It turns out he did, and some of the lessons he learned may be useful to you, too.

To induce Arnold to take the package, his employer paid him a year’s salary as severance. The company also agreed to keep him in their health care plan until he became eligible for Medicare at age 65.

Arnold had worked for the company ever since he graduated from college at the age of 22. He had amassed $350,000 in his employer’s 401(k) plan account. His wife, Janet, is the same age as her husband but had taken a break from work to raise their two children and had $200,000 in her retirement account.

In addition, Janet had inherited $175,000 a few years earlier when her mother passed away. Since she didn’t know what to do with the money, she put it in a money market fund earning minimal interest.

They professed to having only one goal in retirement; never having to work again no matter how bad things got! With that as our overarching objective, we put together an investment portfolio that is still going strong today.

Of course, one of the biggest challenges to retiring in your 50s is not having penalty-free access to your qualified retirement funds. Any pre-tax contributions and earnings taken from a qualified retirement plan prior to age 59 ½ are subject to a 10% early withdrawal penalty in addition to being taxable as ordinary income.

For that reason, we created a “3 bucket” distribution plan to minimize taxes and penalties while providing enough income to live on over the rest of their lives.

The first bucket’s purpose was to generate enough income for Arnold and Janet to live on until they made it to age 60. That way, they would not need to take any early withdrawals from their qualified retirement accounts.

That’s where Janet’s inheritance came into play. We put that money in an intermediate-term, tax-free bond fund. Since Florida has no state income tax, none of the dividends paid by this fund would be subject to any income taxation at all.

In truth, they probably would have been better off in a taxable bond fund since they had no other income. But Arnold and Janet hated the idea of paying taxes and were willing to accept a slightly lower net return for the satisfaction of knowing that they would pay no income taxes on their income.

I created a spreadsheet to show them that by withdrawing $3,000 per month from this fund, it should get them to age 60 before being depleted. In fact, it did much better than that. Since they reinvested capital gains earned by the fund from trading profits, this account still had more than $40,000 in it five years later.

At that point, we discontinued withdrawals from the first bucket and started taking them from the second bucket.

We decided to designate Arnold’s retirement account for the second bucket. It was much bigger than Janet’s and would become the “cash cow” that would generate income until they started collecting their Social Security benefits.

Since Arnold and Judy were both born in 1940, they would be eligible for their full retirement benefit at age 65 1/2. However, they wanted to wait until age 70 to start taking withdrawals if possible. That way, they would receive a higher monthly benefit for the rest of their lives.

Fortunately for them, the first five years of their retirement was 1995 – 2000. Over that span, the S&P 500 Index more than doubled in value. Although we had diversified Arnold’s account across a wide variety of stock and bond funds, his account value had also doubled in value.

That meant Arnold now had $700,000 from which to take withdrawals. By then, their monthly expenses had grown to $4,000. Since they would be depending on this account to make ends meet, we changed its asset allocation to consist of more bonds and fewer stocks.

A Hole in the Bucket

It’s a good thing we did. Over the next two years, the stock market lost nearly half its value. At the same time, interest rates plunged and bond prices surged as investors fled for the safety of Treasury securities.

For that reason, the principal value of Arnold’s account remained constant. What he lost in stock funds he made back in bond funds. However, his account value decreased by his monthly withdrawals.

By the summer of 2002, Arnold’s retirement account was worth less than $500,000 and he still had eight years to go until age 70. He was starting to worry that his plan might fail.

The stock market bottomed out in September 2002. Over the next five years, it once again doubled in value. By October 2007, the S&P 500 reached a new high and Arnold’s original account value had been fully restored. 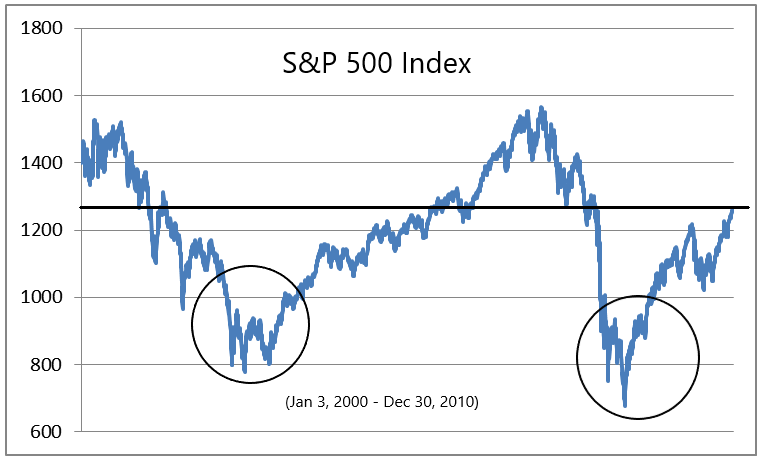 For the second time in five years, Arnold’s account value dropped below $500,000. But with only three years left to go on this phase of the plan, he knew he would make it.

Not only did he make it, but the stock market recovered so swiftly that by 2010 Arnold’s account value was back above $700,000.

Despite two stock market crashes during that decade, Arnold was able to withdraw $480,000 and still retain most of his original principal. And now, he and Janet could start taking a combined Social Security benefit of more than $4,000 per month.

Meanwhile, the third bucket, Janet’s retirement account, had been growing steadily. And since she wasn’t taking any withdrawals, all of the dividends and capital gains paid by the funds in her account were reinvested.

By 2010, Janet’s account was worth more than $600,000. The plan for that money was to pay for an assisted living facility in the event she outlived Arnold.

So far, that hasn’t happened. They both turn 80 this year and are in good health. Janet had a cancer scare five years ago but fully recovered. Arnold’s mother lived to be 98, so longevity is in his genes.

Just before Arnold blew out the candles on his 80th birthday cake, he looked over at me and said, “I guess the only thing I can wish for now is to live long enough to spend the rest of my money!”

Not everyone is as fortunate as Arnold and Janet. But in addition to being lucky, they were disciplined and patient. They didn’t panic when the stock market crashed twice in seven years. Instead, they stuck to their 3 bucket plan and it worked.

Editor’s Note: Jim Pearce just provided time-proven insights that are invaluable for investors trying to save for a comfortable retirement. There’s another expert on our team who can guide you: Jimmy Butts.

The stocks Jimmy finds are usually ignored by the investment herd but they eventually go on to beat the market, regardless of the crisis du jour. For his latest under-the-radar plays, click here now.