American consumers and investors are shrugging off the wider world’s problems, as unemployment hovers at a 50-year low, wages rise, and housing retains its strength.

Let’s start with the housing market. As a certain girl from Kansas said: “There’s no place like home.”

A home is still the biggest asset of most Americans and remains integral to consumer confidence. When the real estate market prospers, people feel wealthier. Overseas threats (e.g., the coronavirus outbreak in China) aren’t making much of a dent in this confidence.

Instrumental in generating a “wealth effect” among Americans is the steady rise in home prices since their collapse during the Great Recession. The latest data show that the housing market remains on firm ground, which strengthens the case for stock market bulls.

The U.S. Census Bureau on Wednesday reported that U.S. homebuilding fell less than expected in January and permits soared to a near 13-year high. The encouraging data propelled the S&P 500 and NASDAQ to record highs yesterday, with the Dow Jones Industrial Average jumping by more than 100 points.

In pre-market futures trading Thursday morning, the three main indices were poised to open modestly lower. A breather is to be expected. But the overriding fact is, the U.S. stock market rally continues. The major impetus is good economic news on the domestic front. Housing stands out. 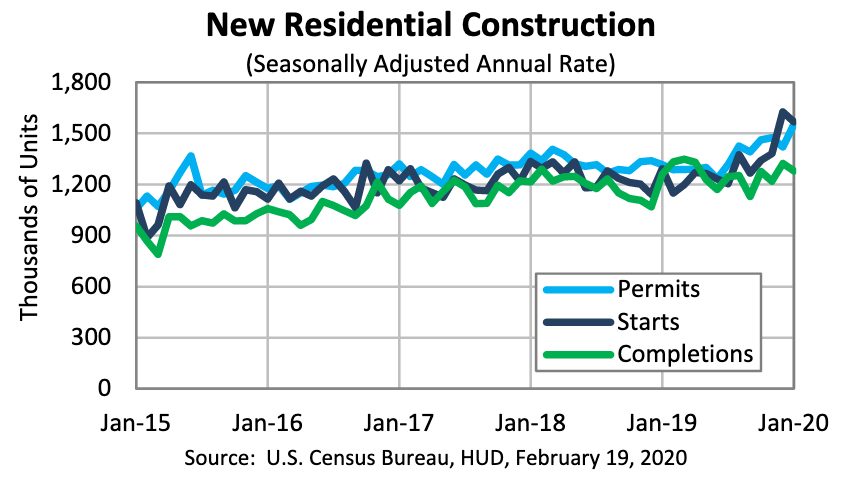 Building permits soared 9.2% to a rate of 1.551 million units in January, the highest level since March 2007. Both single- and multi-family housing segments posted gains.

Meanwhile, a survey on Tuesday showed confidence among homebuilders hovering near a two-year high in February.

Advance estimates of U.S. retail and food services sales for January 2020 were $529.8 billion, an increase of 0.3% from the previous month, and 4.4% above January 2019. The holiday shopping season in 2019 racked up record sales, the results of which will soon show up in the quarterly operating results of retailers.

The news overseas is less encouraging. The International Monetary Fund (IMF) warned on Wednesday that the coronavirus outbreak has seriously dampened economic growth in China. The IMF said that if the virus is left unchecked, it could torpedo a “highly fragile” projected recovery in the global economy this year.

Read This Story: Pathogens and Profits: Coronavirus Takes Its Toll

“A wider and more protracted outbreak or lingering uncertainty about contagion could intensify supply chain disruptions and depress confidence more persistently, making the global impact more severe,” the IMF said in a note to world leaders.

The stock market is overvalued and the list of risks are mounting. Not that you’d know it, from consumer and investor optimism.

Sputtering factory activity in economies around the world? The inevitability of an economic downturn? Political uncertainty in world capitals, from Washington to London to Brussels? The continuing trade war? The deadly coronavirus?

The red-blooded American shopper is either unaware of such issues, or simply yawns at them. The economy is humming along and stocks hover at record highs. Transcending geopolitical risks are meat-and-potatoes “pocketbook” issues: low unemployment, low interest rates, low inflation, resilient home values, and rising wages.

If it survives that long, the bull market will turn 11 years old in March. The long upward climb already is the longest bull market in history. I remain generally optimistic about stocks this year, but gains will be considerably lower than those we enjoyed in 2019.

So how should you position your portfolio for 2020? We’re in the midst of a sector rotation toward value, a trend that I expect to continue for the rest of the year.

There’s an additional benefit to buying stocks of inherently solid companies when they’re undervalued. Not only do you get exposure to the improving fundamentals that push prices higher over time, but in the short to medium term, you’ll probably enjoy an extra bump from mean reversion.

As long as the U.S. economy continues to exhibit growth, you can still find reasonably valued stocks with plenty of upside left. Which brings me to value plays in the marijuana industry.

State-level legalization of marijuana is fueling a bonanza for investors. And it’s my view that the repeal of the federal ban against pot is inevitable. But don’t wait to leverage these facts. Start buying marijuana stocks now.

The accelerating pace of legalization among the states indicates that the industry is poised for its next upward surge. Many marijuana stocks represent buying opportunities, after a much-needed correction in 2019 put fundamentally sound pot stocks on the bargain shelf.

One of the advantages of investing in cannabis is the industry’s immunity to the overseas dangers that I’ve outlined in today’s column. Demand for recreational and medical pot is growing exponentially. By gaining exposure to the right pot stocks, you can buffer your portfolio from “headline risks” such as trade wars and virus outbreaks.

For our team’s latest research on the best-positioned marijuana plays, click here.