In the 1978 comedy Animal House, Dean Wormer referred to the rambunctious Delta fraternity with this classic line: “As of this moment, they’re on double secret probation!”

We’re all subject to the petty tyrannies of real-life Dean Wormers. Which brings me to the marijuana industry. It appears that prominent marijuana researchers in the United States have been subject to secret sanctions of a convoluted nature that would have made the dean of Faber College proud. At least, that’s what a new lawsuit alleges.

Invoking the Freedom of Information Act (FOIA), prominent scientists are suing the U.S. Drug Enforcement Administration (DEA) over the agency’s alleged use of what the FOIA lawsuit calls a “secret law” to impede the expansion of marijuana research.

The plaintiffs seek access to an internal Department of Justice (DOJ) memo that could reveal how the federal government is secretly using an interpretation of international treaties to delay marijuana studies.

The lawsuit alleges that the DEA is using double-talk to pursue a hidden agenda: impede medical marijuana research.

The Scottsdale Research Institute (SRI) is the main group behind the lawsuit. Arizona-based SRI is one of more than 30 organizations that have submitted applications to DEA to become licensed cannabis manufacturers for research purposes. However, those applications have been mysteriously held up, which prompted SRI and other leading research groups to sue the DEA.

The legalization of marijuana is an inexorable trend, but the pot prohibitionists have not given up. The federal government is home to many officials with an anti-marijuana mindset. Cannabis advocates allege that these officials have been quietly working behind the scenes to stymie the mainstreaming of cannabis.

The seeds of the FOIA lawsuit were planted more than three years ago. In 2016, the DEA announced it would expedite marijuana research by approving additional growers beyond the sole marijuana source that has existed for half a century at the University of Mississippi. But since then, applicants have heard crickets.

SRI filed an initial lawsuit alleging that the DEA was purposely bottling up the process. A court instructed the DEA to fulfill its promise, the DEA agreed, and the case was subsequently dropped in October 2019.

This month, DEA rolled out a rules change proposal that it claimed was needed because of the high number of applicants. The agency also claimed that the new rules would address complications arising from international treaties to which the U.S. is a party. A public comment period is currently open, after which the agency promises it will start approving applicant growers.

The new revised rules aim to shift jurisdiction over cannabis growing and dispersal to a single agency, the DEA, which would purchase and technically own all of the cannabis grown by approved cultivators, and then later sell the product directly to researchers. This research work is instrumental for the medical marijuana industry as a whole.

But SRI and its fellow plaintiffs remain suspicious of the DEA’s intentions. According to the plaintiffs in this new lawsuit, after DEA said it would accept more cultivators, the Justice Department’s Office of Legal Counsel (OLC) secretly issued an opinion that interprets international treaty obligations as making it impossible to carry out the 2016 proposed rule while maintaining treaty compliance.

That OLC document, which remains classified, is the basis of SRI’s FOIA complaint. The case was filed with the U.S. District Court for the District of Arizona last Wednesday and requests that the DOJ be found guilty of unlawfully failing to make records available related to its interpretation of the Single Convention treaty, including the OLC opinion. It further states that DEA should release those documents.

Demand for medical as well as recreational marijuana remains strong, as this chart shows: 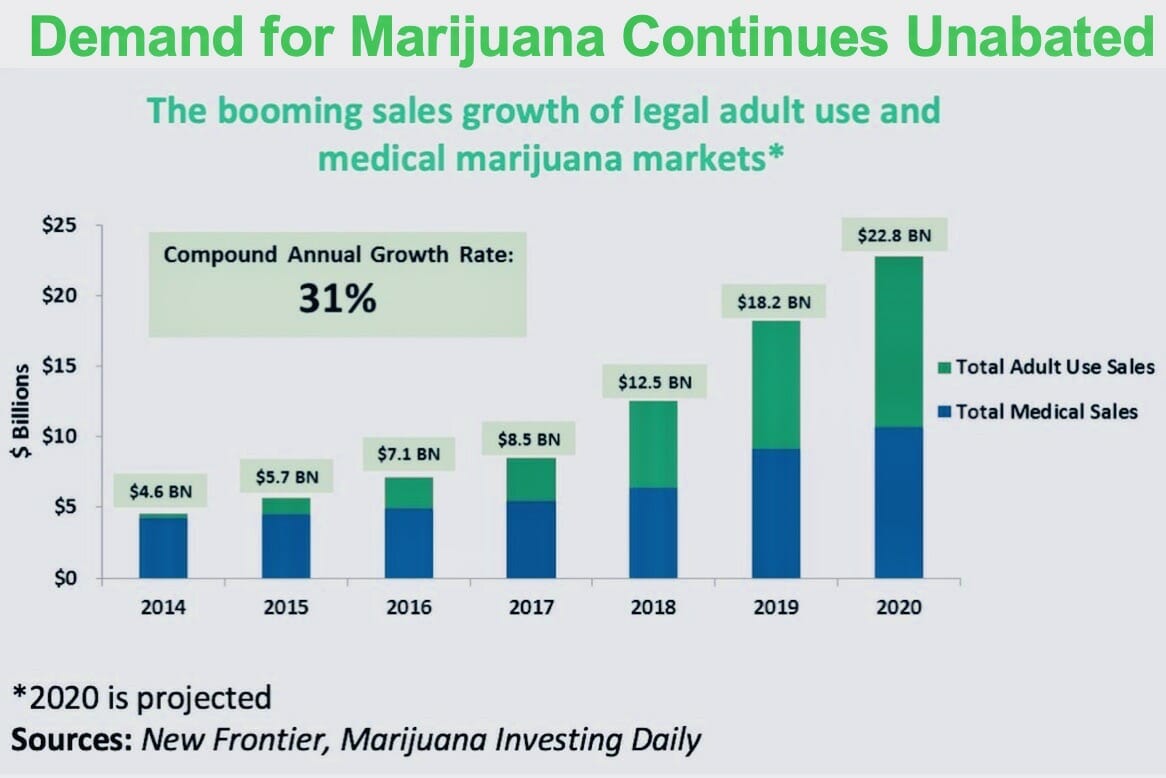 As the world seeks new cures for chronic diseases, medical marijuana can play a huge role. SRI’s research objectives for marijuana include potential treatments for:

The pending lawsuit of medical marijuana researchers against the DEA underscores the volatile nature of the marijuana industry. The culture wars of the past die hard. Cannabis is a fast-growing business but it’s subject to political whims.

To find the best pot stocks, you need to conduct due diligence to separate the gems from the dross, the vulnerable from the strong.

We’ve done the prospecting for you. Want to pinpoint the highest quality investments in the cannabis sector? Click here to access our free report. You also can reach me directly: mailbag@investingdaily.com