Where will you be on April 20? Maybe you didn’t know it, but it’s an important date on the marijuana calendar.

Marijuana adherents recognize April 20 (or 4/20) as an international holiday for cannabis culture. “Four-twenty” will be different this year, because of COVID-19 social distancing mandates. But enthusiasts of the global holiday are keeping the celebrations alive in virtual formats.

Several organizations have announced that they’ll host virtual events during which individuals can listen to live musical performances and discuss marijuana legalization proposals, while consuming pot in all of its forms from the safety of their homes. Below, I’ll review the latest legal developments pertaining to cannabis.

In the meantime, the 4/20 show must go on. Notably, the National Organization for the Reform of Marijuana Laws (NORML) tweeted Wednesday that it is encouraging supporters to participate in one of the “many online virtual 4/20 celebrations taking place throughout the day,” which will be listed on the group’s website: 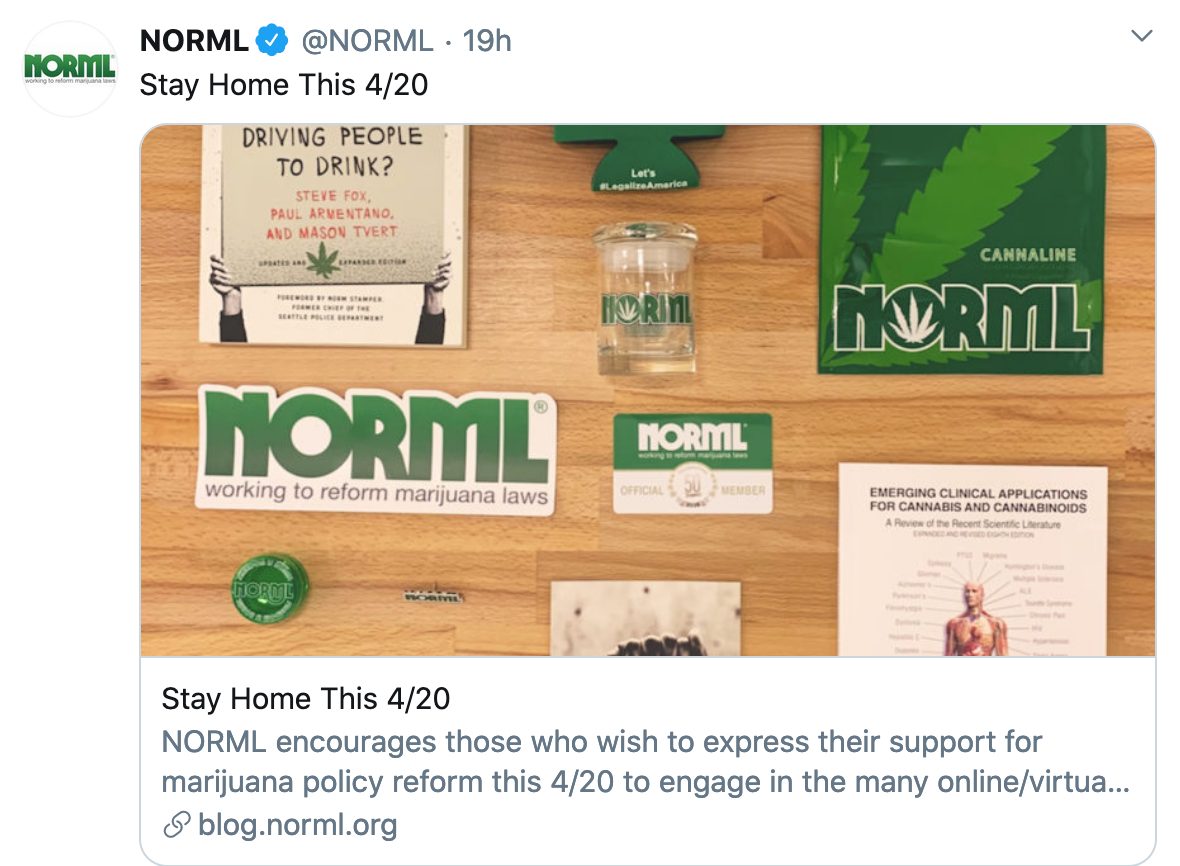 The forthcoming marijuana holiday begs the question: where did the numerals 420 come from? Therein you’ll find many interesting urban legends.

Some point out that 420 is police code for “marijuana smoking in progress.” Others note that 4/20 is Adolf Hitler’s birthday, although I fail to see the connection between marijuana and Der Fuhrer.

In another farfetched theory, Bob Dylan’s song Rainy Day Women #12 & 35 is the source, because 12 multiplied by 35 equals 420. Perhaps the most believable story is about five students at San Rafael (CA) High School in the early 1970s who would meet at 4:20 p.m. every day to partake, saying “420” to each other as code for marijuana. (The school’s extracurricular activities would end at 4:20 p.m.)

Fact is, no one really knows the exact derivation of 420. Regardless, over the past four decades, April 20 has become an international holiday for marijuana, when people get together to celebrate, consume and advocate for marijuana.

Marijuana is a mainstream business nowadays, but the April 20 holiday also features a counter-cultural aspect, whereby marijuana users protest in civil disobedience by gathering in public to light up at 4:20 p.m., even if they’re located in places where weed is illegal.

Let’s review the status of marijuana legalization throughout the U.S. Investors in marijuana need to stay abreast of the laws and regulations pertaining to pot.

U.S. Rep. Diana DeGette (D-CO) tweeted: “Marijuana is a legitimate, billion-dollar industry in Colorado. Our small cannabis businesses should have the same access to SBA loans and support as any other business. The next coronavirus response bill must ensure these businesses get the help they need.”

U.S. Senators continue deliberations over the Secure And Fair Enforcement (SAFE) Banking Act, which seeks to expedite the provision of financial services to cannabis companies by removing the fear of potential federal action against lenders.

Read This Story: One Nation, Under Marijuana

The SAFE bill was passed by the U.S. House, but has stalled in the Senate because of the coronavirus pandemic.

Colorado’s attorney general tweeted: “The Tenth Amendment supports our efforts to resist federal preemption, whether of marijuana legalization efforts or adoption of clean car standards above the federal standard.” Under a new law that went into effect January 1, Colorado allows for the commercial delivery of marijuana.

Missouri regulators said medical cannabis businesses could be allowed to open by August.

Montana organizers of a marijuana legalization campaign are suing state officials for the right to collect ballot initiative signatures electronically during the coronavirus pandemic.

Oregon’s attorney general tweeted: “Always ask yourself if the business has proof of their promotional claims, or if the product has been approved by the @US_FDA? Recently, we warned a wellness store in SE Portland that their advertising of CBD products to boost immunity against the coronavirus violated the law.”

Virginia Gov. Ralph Northam (D) seeks to broaden the parameters of medical marijuana products that patients can access through a proposed amendment to a bill that lawmakers sent to his desk.

Under the proposal, CBD/THC-A/THC percentage requirements would be replaced by milligram limits. The Virginia legislature is scheduled to convene on April 22 to consider this marijuana language and various other proposals from Northam.

As marijuana becomes increasingly legal in America and other countries, the recreational and medical uses of this apparent wonder herb represent a huge investment opportunity.

The fact that marijuana has its own annual international holiday should tell you that the “green rush” is real. For our report on the best marijuana stocks to buy now, click here.