Best-Performing Asset of the Last 20 Years

Here’s a quick thought exercise. Roll back the clock to the start of January 2020 before the COVID-19 outbreak started to affect the stock market. Then go back 20 years to the century’s start and pick just one asset to buy. What would it be?

Since the stock market has made big gains, you may say stocks. But the answer may surprise you. It is gold!

After COVID-19 erupted in the West, gold has outperformed. However, as you can see in the chart, gold was leading other assets even before the pandemic. 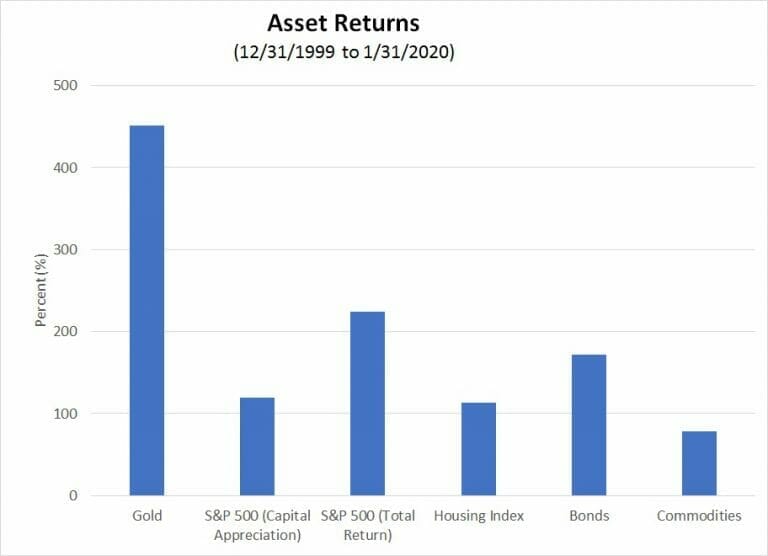 Gold Versus Other Assets

During that time, the S&P 500 (as the proxy for stocks) rose 2.1 times, underperforming gold by more than 60%. With dividends reinvested, total returns from the S&P 500 were more than 50% above the nominal gains but still 40% below the gains from holding gold.

If gold handily outperformed the S&P 500, how did it do against other assets, for example real estate? The widely followed Case-Shiller index tracks resale prices of single-family homes. The index value is 212.43 compared to 99.58 at the beginning of the century. That’s a rise of 2.13 times, about the same as for the S&P 500 excluding dividends and more than 60% below the gain in gold.

Cash and bonds also sharply under-performed gold. The most widely followed benchmark for bonds is the Bloomberg Barclays U.S. Aggregate Bond Index. It measures total returns from a full spectrum of corporate and government investment-grade bonds. The index rose from 833.75 at the century’s start to 2,314 at the end of January 2020. That ratio of 2.7 is a little lower than the gains in total returns of the S&P 500 and more than 50% lower than gold’s gains.

A final asset class is commodities other than gold. Commodities aren’t really household assets, since so few investors hold them. Still, commodity performance offers insight into what to expect in the future.

Americans Are Under Invested

The sad news is that very few Americans have participated. Only a minuscule portion of Americans own gold. Each quarter the Federal Reserve publishes estimates of the balance sheets of American households. The two most important assets are stocks and real estate (mostly homes). Bonds and bank deposits are also important.

There is no separate entry for gold. Possibly it is lumped in with durable goods, a category that is small relative to stocks and real estate. Within this small category, gold would be a relatively minor constituent, with autos far more important.

For Americans who want to invest in gold, the easiest way is to invest in a gold exchange-traded fund (ETF). Or you can buy shares in gold miner stocks or ETFs. The combined value of all these investments amounts to no more than 1% or so of the S&P 500.

Newmont (NYSE: NEM) is the only gold miner actually represented in the S&P 500. NEM’s market cap is about $46 billion compared to $25 trillion for the entire index. It makes up a tiny portion of the S&P. Don’t mislead yourself into thinking you gain a stake in gold by owning an ETF that tracks the S&P 500.

The other choice is to buy physical gold. Estimates are that Americans consume about 160 metric tonnes of gold a year. Probably more than 80% of that is jewelry, which generally shouldn’t be viewed as an investment.

The cost of gold jewelry includes labor and design, which means you pay a big premium for whatever gold it contains. Moreover, other than for rare antique jewelry, most jewelry depreciates over time. The remaining 20% is a combination of gold coins and bullion bars.

If you count jewelry purchases as gold investments, at today’s gold price it amounts to a yearly investment in gold in the U.S. of around $25 per person. Excluding jewelry, the figure drops to about $5 per person. Most estimates are that between 1% and 5% of Americans own gold as an investment.

If you speak to a financial advisor, not many would mention gold as something to consider. But as our comparison exercise shows, it helps to think outside the box.

As coronavirus panic grips Wall Street, the price of the yellow metal has further to run. Here’s the really good news: I’ve pinpointed an under-the-radar play in gold that the rest of the herd is missing.

My play on the “Midas metal” could hand you exponential gains…if you act now. Click here for details.