Which Way Will Wayfair Turn Next?

About the only stocks gaining a lot of ground lately have been tech companies. Over the past six weeks, Amazon.com (NSDQ: AMZN) is up more than 50%. That’s more than double the 22% increase in the SPDR S&P 500 ETF Trust (SPY) over the same span.

In a moment, I’ll show you a stock that has performed far better than Amazon and may be ripe for a trading opportunity.

Many stores have remained open throughout the coronavirus pandemic due to the “essential” nature of the products they sell. If a store sells groceries, alcohol, or medicine, then it could remain open. So could home improvement chains such as The Home Depot (NYSE: HD), which is also up roughly 50% since bottoming out in March.

Of course, the reason for Amazon’s outsized performance is its online retail business. Americans have been stuck at home for the past two months. They’re bored and they like to shop. As for Home Depot, a lot of people decided they might as well get that “honey-do” list done since they are stuck at home anyway.

But neither Amazon nor Home Depot comes close to the amazing performance of online merchant Wayfair (NYSE: W). Since bottoming out below $22 on March 19, Wayfair soared above $180 at the start of this week. That’s a gain of more than 700% in less than two months! 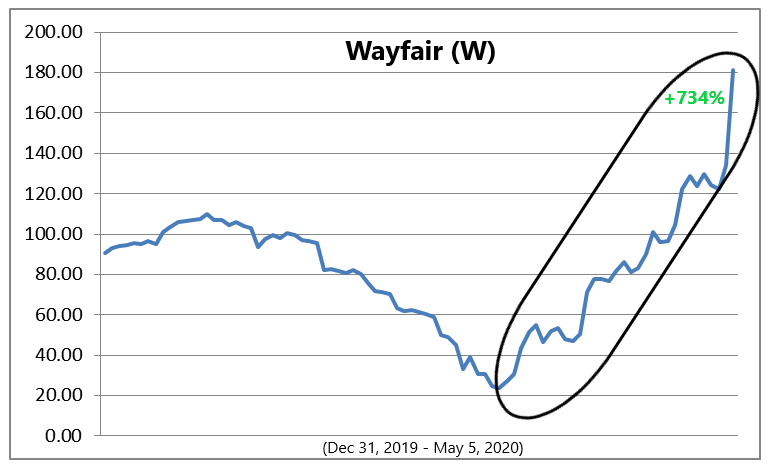 Apparently, it isn’t toilet paper and jigsaw puzzles that people can’t seem to get enough of. Wayfair sells a wide variety of home goods, mostly big-ticket items including furniture (on a personal note, I bought a hot tub from Wayfair two years ago and love it).

The Sharks are Circling

Wayfair released its Q1 results on May 5. You might infer from the 30% jump in its share price that morning that its sales figures were incredible.

To be sure, the 20% increase in Wayfair’s first-quarter sales was impressive. So was the 29% gain in its active customers. But that’s exactly what you would expect given the conditions in place since Americans have been forced to stay at home.

Despite the big jump in sales, Wayfair did not earn a net profit during the quarter. In fact, Wayfair recorded a GAAP net loss of $286 million, or -$3 per share.

However, Wayfair did record a gross profit of $578 million during the quarter. Gross profit is what a business earns after deducting its cost of sales, but does not take into account its fixed operating expenses.

That seems to be the number that Wall Street has chosen to fixate on. One analyst raised his price target for Wayfair to $160, but cautioned that its business model “remains largely unproven” and that his “call on W is speculative in nature.”

No kidding. We’re talking about a company that is not even close to making a profit and earns a -24% return on assets. It carries roughly 25 times more debt than cash and has a book value of -$10 per share.

From all appearances, that makes Wayfair a short seller’s dream come true. In fact, short interest in its stock has escalated to a whopping 47% of the float. The sharks are moving in for the kill.

The big question is, when will that happen? And more importantly, how can you profit from a steep decline in Wayfair’s share price?

The least expensive way to participate in Wayfair’s demise is to buy a put option on its stock. Put options increase in value when the price of the underlying security decreases in price.

If you think Wayfair will implode within the next month, buying a put option that expires in June would be the least expensive way to go. On May 5, a put option on Wayfair that expires on June 19 at the $160 strike price could be bought for $18.

That means Wayfair would have to fall below $142 by that date for this option to be profitable. With Wayfair trading near $170, that works out to a decline of 16% over the next five weeks.

The same put option expiring on November 20 was selling for $40 that day. For that trade to become profitable, Wayfair would need to fall below $120 within the next six months.

There is one scenario that the short sellers dread. Amazon could easily acquire Wayfair, which has a market cap of only $16 billion (compared to a market cap of $1.2 trillion for Amazon).

As for me, I’m going to sit this one out. Although I feel Wayfair has become grossly overvalued, I’ve learned the hard way that logic does not always prevail on Wall Street.

Instead, I prefer using a proven method for trading options that works in all types of environments such as the one used by my colleague, Jim Fink.

Jim Fink is the chief investment strategist of the premium trading service, Jim Fink’s Inner Circle. Jim has developed a way to quickly and predictably multiply the gains of regular stocks.

Jim is now making you a promise. If the recommendations you get from his Inner Circle advisory don’t give you the opportunity to turn $5,000 into $50,000 in the next year, simply give us a call and we’ll give you another year free of charge.

Jim has put together a new presentation, in which he discusses how to make market-crushing profits, whether the market is going up…down…or sideways. Click here for details.