After spending most of the past year trading below $5, shares of NVAX shot above $42 on May 12. The day before, Novavax announced it will receive up to $388 million to fund its COVID-19 vaccine candidate. 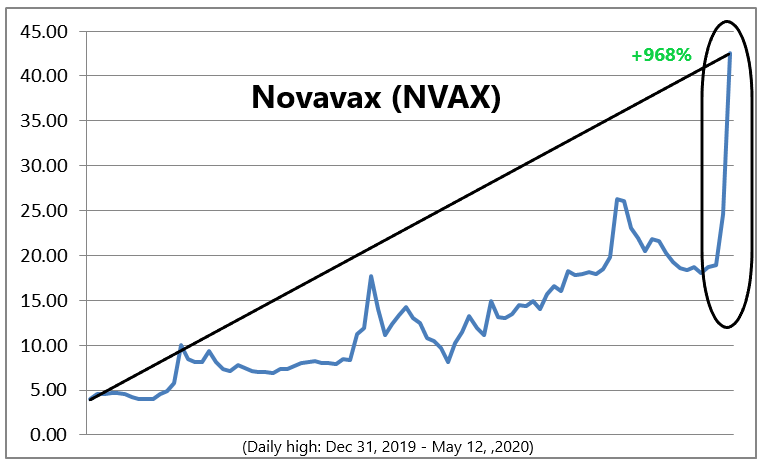 That’s a lot of money for a company that had a market cap of less than that amount four months ago. However, it’s a pittance if Novavax is able to deliver an effective vaccine for COVID-19 by the end of this year.

The money is coming from the Coalition for Epidemic Preparedness Innovations (CEPI). CEPI was formed in 2017 to combat the rising threat of a global pandemic. Its mission is to facilitate cooperation among government agencies and private research labs all over the world.

As you might expect, the Bill and Melinda Gates Foundation is a major contributor to CEPI. Five years ago, Bill Gates famously warned that the world wasn’t prepared for a global pandemic. Turns out, he was right.

Now that the pandemic is here, the only thing anyone wants to know is when it will be gone. For that to happen, we need a vaccine. A cure helps those that already have the virus, but a vaccine is the only way to prevent it from spreading.

That’s why NVAX has appreciated 968% since the start of this year. If the vaccine’s trial is successful, more than one billion doses of it will be produced next year.

One Way or Another

According to Novavax, the results of the combined Phase 1 and Phase 2 trials will be known in July. By then, we should know if it has a winner or not.

If Novavax is the first company to produce a vaccine for COVID-19, its share price should go a lot higher. But if the trial ends in failure, NVAX could fall quickly.

For that reason, the implied volatility on call and put options for Novavax is huge. Implied volatility is a mathematical computation that reflects the degree to which the price of the underlying security is expected to deviate from its current price over the life of the option.

The same day that NVAX shot above $42, a call option that expires on July 17 with a strike price at $34 could be bought for $11. That works out to implied volatility of 146%.

At the same time, a put contract for Novavax with the same strike price and expiration date could be bought for $8. That equates to implied volatility of 187%, even higher than for the call option.

For the call option to be profitable, NVAX would have to rise above $45 over the next two months. That’s roughly 10% higher than where it was trading at the time that option could be purchased.

Both Sides of the Fence

I’m not sure which way Novavax will go, but I suspect it will move sharply one way or the other. Either the vaccine will succeed, in which case NVAX could move considerably higher. If it fails, its share price could easily recede to where it was trading just a few months ago.

For that reason, an options strategy to consider in this case is a “straddle.” A straddle entails buying a put and call option with the same strike price and expiration date. Keep in mind that you are paying for two option premiums, only one of which will end up being profitable.

A straddle is risky since NVAX would have to make a huge move for this trade to pay off. Using the example above, NVAX would have to move above $53 or below $15 to cover the cost of both premiums and earn a profit (the $34 strike price +/- the $19 in total option premiums paid).

Bear in mind, NVAX was trading below $10 two months ago. So, if its vaccine fails then a return to that level does not seem unreasonable. And if it succeeds a rise above $60 seems almost certain. The stakes are very high, and so is the potential gain regardless of how this trial turns out.

Editor’s Note: Our colleague Jim Pearce just outlined an exciting investment play that’s poised to pay off in a big way. But maybe options trading isn’t for you.

If you’re a conservative buy-and-hold investor who seeks safety, consider an asset class that generates a steady stream of income but also helps you sleep peacefully at night: dividend-paying stocks.

You don’t have to be an income investor to love dividend-paying stocks. Dividend-payers are time-proven vehicles for long-term wealth building, but they’re also safe harbors in turbulent seas because companies with robust and rising dividends by definition boast the strongest fundamentals.