Rancor Erupts in Congress Over Marijuana

If you thought Democrats and Republicans were on the verge of joining hands and singing kumbaya when it comes to the marijuana industry…well, think again.

A bitter partisan shoutfest is unfolding in Congress, as Republicans loudly rebel against Democratic efforts to include marijuana industry assistance in new coronavirus relief legislation. It’s a reminder that many social conservatives are trying to reverse the tide of growing marijuana use.

The U.S. House approved a coronavirus relief package last Friday that includes provisions that would protect banks that service state-legal marijuana businesses from being penalized by federal regulators.

Marijuana industry lobbyists have been pushing for cannabis reform to be inserted into coronavirus relief legislation. The inclusion in the latest COVID-19 bill of the Secure and Fair Enforcement (SAFE) Banking Act, which was previously passed by the House as a standalone bill last year, is a major victory toward that goal.

However, now that it contains SAFE provisions, the COVID-19 relief bill faces a buzz saw of opposition in the Senate. The SAFE language stands a good change of getting removed, to expedite passage of the broader coronavirus bill.

Rep. Ed Perlmutter (D-CO), chief sponsor of the cannabis-related legislation that’s included in the new broader COVID-19 package, asserted on the floor last week that the measure would protect public health by reducing the risk of spreading the coronavirus through cash transactions.

“Continuing to exclude the cannabis industry from accessing basic and essential financial services during this time will result in more harm than good,” Perlmutter said. “Not only will it make the country’s economic recovery that much harder, but the provisions intended to help minority-owned businesses would continue to be absent within the industry.”

Several House and Senate GOP members, however, condemned the inclusion of the marijuana language as irrelevant to the public’s needs. They painted the cannabis provisions as a “liberal wish list” promoted by “House radicals.” The following tweet is indicative of the sentiment: 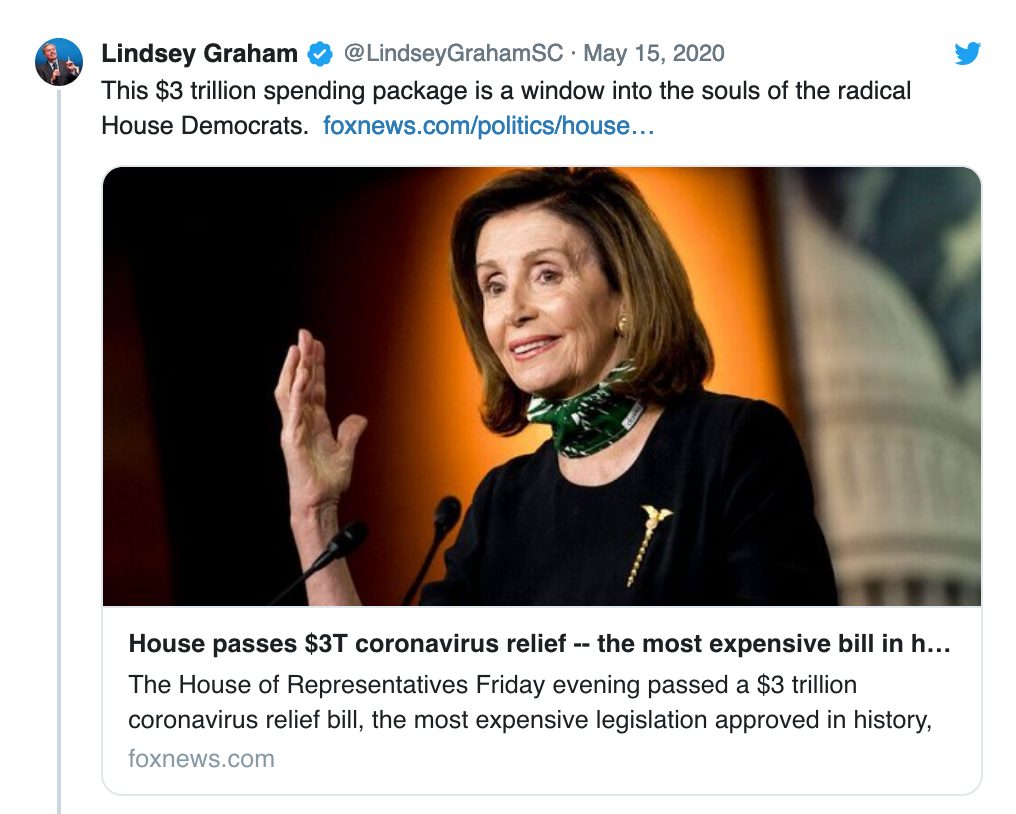 House Minority Leader Kevin McCarthy (R-CA) said in a floor speech last week that the limited number of lawmakers involved in crafting the COVID-19 legislation is “why it ended up talking about cannabis more than it ever mentioned a job…Yes, this bill is up in smoke and it should end that way.”

Rep. McCarthy has consistently voted against protecting marijuana laws in legalized states. His lack of enthusiasm for marijuana legalization slowed the impetus for cannabis reform in Congress, when Republicans were in charge of the House.

The GOP attacks against the banking language are coordinated, using similar talking points that are reiterated in conservative media. That suggests the marijuana-related language is unlikely to survive in the GOP-controlled Senate.

Read This Story: The Politics of “Big Weed”

A summary of the COVID-19 legislation says the SAFE banking section would “allow cannabis-related legitimate businesses, that in many states have remained open during the COVID-19 pandemic as essential services, along with their service providers, to access banking services and products, as well as insurance…This section also requires reports to Congress on access to financial services and barriers to marketplace entry for potential and existing minority-owned cannabis-related legitimate businesses.”

The House passed the SAFE Banking Act last year and it has since been stuck in the Senate Banking Committee. Chairman Mike Crapo (R-ID) has been recommending several changes that Democrats consider a deal killer, although Sen. Cory Gardner (R-CO) says a deal is close.

But the fact is, despite the efforts of pot prohibitionists, the legalization of marijuana continues apace. There’s too much money at stake, which means anti-pot crusaders will probably prove unsuccessful in putting the genie back into the bottle.

What’s more, public opinion remains firmly behind marijuana legalization. The SAFE language in the COVID-19 bill probably will get excised, but its removal would only prove a temporary setback in the wider national effort to pass marijuana-friendly legislation.

By the time all the votes are counted in November 2020, several more states are likely to have legalized marijuana to one degree or another. The mainstreaming of marijuana is unstoppable.

My grandmother had an expression that seems appropriate to this legislative controversy: “The dogs bark, but the caravan moves on.”

Questions about marijuana investing? You can reach me directly: mailbag@investingdaily.com