In my head as I write this story, I keep hearing the musical refrain: “Everybody must get stoned.” Those words, penned by Nobel Prize Laureate Bob Dylan, seem to be the anthem of millions of Americans amid the pandemic. The coronavirus is wrecking the economy and throwing people out of work, but it’s been a lifesaver for the beleaguered pot industry.

Call it the Great Pandemic Paradox. The COVID-19 outbreak is simultaneously creating a recession and fueling marijuana sales, as anxious consumers hoard weed and several states deem marijuana companies “essential services” that can remain open. Cannabis has gone from illicit substance during Dylan’s heyday to an officially sanctioned, must-have item.

Now that lockdowns are easing, marijuana consumption is on track to maintain its momentum as recreational and medicinal pot products increasingly become everyday routines. Marijuana equities that swooned in 2019 are bouncing back this year and should sustain their rally, as the accelerating use of marijuana lifts the industry’s revenues and profits.

Cannabis research group New Frontier Data estimates that the marijuana industry will grow roughly 14%, with sales reaching as high as $13.1 billion, by 2025. The pandemic has done nothing to slow this growth. In fact, it has fueled it.

Oregon is an instructive case study. An Oregon Office of Economic Analysis report released last week reveals that marijuana sales have skyrocketed during the coronavirus outbreak.

“Marijuana sales during the pandemic have been quite strong. The dollar amount of recreational sales since March 1st are up 60 percent relative to a year ago. These increases are not only related to the stockpiling consumers did after the sheltering in place policies were enacted, but have continued through April and early May.”

The 4/20 in the chart refers to the unofficial international celebration of marijuana known as “Four-Twenty,” which occurs every April 20.

As the number of jobs in cannabusiness grows, politicians are more likely to push for legalization. Marijuana is becoming entrenched as a mainstream business, with more and more families across the country depending on Mary Jane for a paycheck. At the same time, politicians are getting addicted to the state and local tax revenue.

That’s all welcome news for marijuana investors, many of whom remain rattled by the correction in pot stocks that occurred late last year. But the shakeout is over, with the survivors on firm footing and employing masses of people.

For illumination let’s turn to another state, New Mexico. The governor of New Mexico emphasized last week that the state needs to explore every option for economic relief, including the passage of marijuana legalization.

In a livestream town hall last week updating residents on the state’s coronavirus response initiatives, Gov. Michelle Lujan Grisham (D) was asked whether she was in favor of the state legislature passing marijuana legalization during an upcoming special session to generate tax revenue to offset financial shortfalls created by COVID-19.

Grisham asserted yes and added that if lawmakers had heeded her and legalized adult-use marijuana this year, the state probably wouldn’t have had to cut several programs amid the pandemic’s economic damage.

As Grisham put it: “If we want economic support and economic relief, then we have to use every economic idea. And I want to point out also that the vast majority of New Mexicans favor recreational cannabis.”

We’re already seeing signs of the marijuana investment renaissance to come. A marijuana industry benchmark exchange traded-fund (ETF), the Horizons Marijuana Life Sciences Index ETF (HMMJ), has only lost 2.63% this year, compared to a loss of 9.28% for the S&P 500. The following chart shows how the COVID-19 pandemic this year has actually buoyed marijuana stocks: 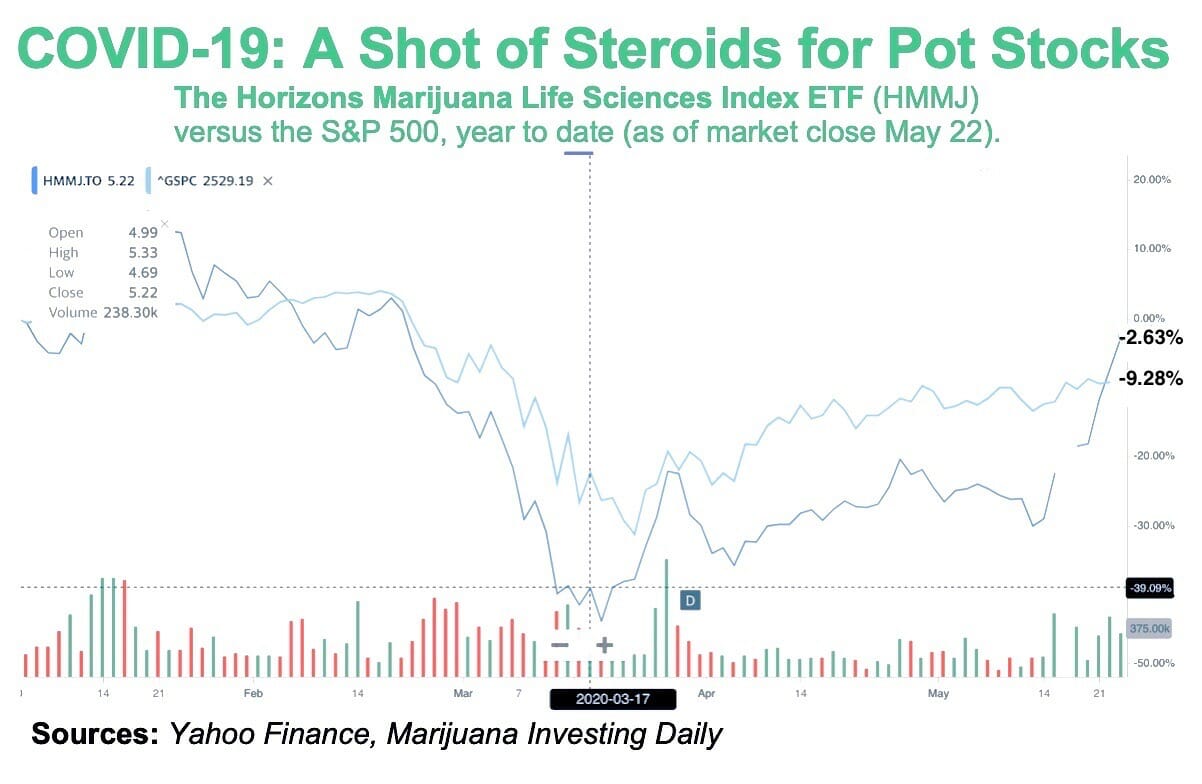 Many thinly capitalized players grew absurdly overvalued in the lead up to Canada’s legalization of marijuana in 2018. The bubble expanded until it finally burst in late 2019.

During marijuana’s go-go days in 2018 and 2019, faddish companies opened ornate headquarters, threw lavish parties, and launched costly but ineffectual marketing. They burned through cash, made dubious acquisitions, and took on too much debt. Their hipster CEOs would appear on CNBC to make hyperbolic promises that their companies couldn’t keep.

The weakest marijuana firms have seen their market values plunge. Many have gone belly up. Some were “pump-and-dump” schemes to begin with.

In the fickle marijuana sector, careful stock selection is all the more important. This year and beyond, the winners in the marijuana sector will boast prudent management and solid balance sheets, particularly biotechs with proven or promising products.

Cannabis investments confer market-beating potential and they’re a must for your portfolio. But the key is finding the right pot stocks. Some cannabis stocks are stellar investments. But as the marijuana correction last year showed, vulnerable pot stocks are portfolio killers. You need to conduct due diligence. We’ve done the homework for you.