A few days ago, a truck pulled up in my neighbor’s driveway. It was there to deliver a gleaming new exercise bike from Peloton Interactive (NSDQ: PTON).

I’m sure you’ve seen the widely mocked Peloton ads on television. In them, people who already appear impossibly fit are peddling like mad under the supervision of a virtual drill sergeant.

These bikes aren’t cheap. After spending more than $2,000 to buy one, there is a monthly subscription fee starting at $13.

Peloton went public last September at a $29 IPO price. It traded flat for six months before the coronavirus pandemic sent its share price soaring. Over the past three months, PTON has nearly tripled in value. 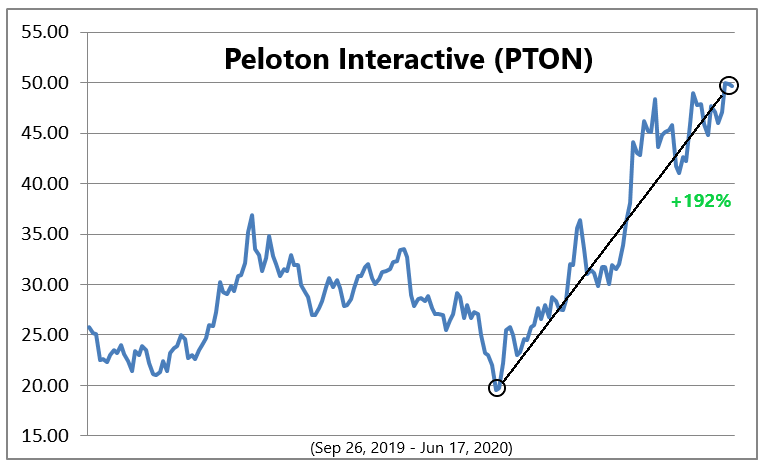 I saw my neighbors later that day and asked them why they bought the bike. They already have road bikes, which they ride frequently. Having a Peloton struck me as overkill.

“We’re getting ready for this winter,” they told me. “We don’t think we’ll feel comfortable going back to our gym when it reopens, so we wanted to get a Peloton now while they’re still available.”

Read This Story: The American Shopper Rides to the Rescue

First, I must commend them for planning ahead. The day we had this conversation it was the middle of June with the temperature hovering near 80 degrees.

Second, and more importantly, I wondered how many other people may be thinking the same thing. Is it possible that the coronavirus pandemic has spawned a new generation of fitness buffs?

As much as I’d like to believe America has caught a new fitness bug, the cynic in me suspects that is not the case. We all know what happens to a lot of those gym memberships purchased in January as a result of New Year’s resolutions.

I have a funny feeling that you will be able to buy a lightly used Peloton pretty cheap next year. If that happens, sales of new bikes could level off. So could Peloton’s share price.

It appears the options market has figured that out. A few days ago, a put option on Peloton with a $50 strike price that expires in January was selling for $11 (put options increase in value when the price of the underlying security goes down). For that trade to be profitable, Peloton would have to drop more than 25% over the next seven months.

I don’t expect Peloton to fall that far, but I don’t think it will appreciate much more, either. In this case, I believe the options strategy that makes the most sense is a “short strangle.”

That means I will sell the put on Peloton instead of buying it. That way, I receive $6 of options premium right away. At the same time, I will also sell a call option on Peloton with a $60 strike expiring in January. I’ll get $7 in options premium for selling that one, too.

Combined, I will receive $13 in options premiums today. In exchange, I am obliged to buy Peloton if it falls below $40 and I am obliged to sell it if it rises above $60 prior to expiration.

Ideally, I’d prefer that Peloton never trade below $40 or above $60 between now and expiration. In that case, I get to keep the $13 with no further obligation.

The biggest risk is that Peloton shoots above $60, in which case I’d have to buy it in the open market so I can make good on the contract. As long as Peloton doesn’t rise above $73, I’ll still make a profit (the $60 call exercise price plus the $13 in premiums received).

If Peloton goes the other direction, I’ll make a profit as long as it does not fall below $27 (the $40 put exercise price minus the $13 in premiums received). I like those odds. If I see the stock moving strongly one way or the other, I should have plenty of time to cover the trade and still earn a profit.

Admittedly, that type of options trade is pretty sophisticated and requires a high tolerance for risk. If that’s more than you are ready to handle, consider following the advice of my colleague, the renowned options trader Jim Fink.