Of all the companies to become unexpected beneficiaries of the coronavirus pandemic, perhaps none is more surprising than Fiverr International (NYSE: FVRR). If you’ve never heard of Fiverr, that’s understandable. The company is based in Israel and provides an online marketplace for independent contractors to find work.

Fiverr went public in June 2019 at $21 per share. After shooting above $44 during its first week of trading, FVRR spent the remainder of last year beneath $30. Last week, FIVR traded above $124 for a gain of more than 400% this year. 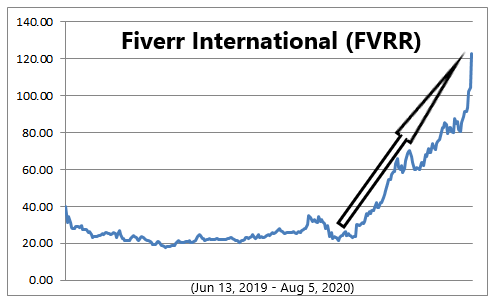 It took the stock market a while to figure out that Fiverr was going to be a winner. Through the middle of April, three months after the onset of the coronavirus pandemic, FVRR was still trading below $30.

As the full extent of the pandemic’s impact on employment became known, FVRR started to gain momentum. A lot of newly unemployed workers desperately need income, and Fiverr is one way for them to get it.

At the same time, a lot of companies had to lay off workers to avoid going under. Many of them are also turning to Fiverr to obtain piecemeal work from independent contractors. In short, Fiverr is the solution to both of their problems.

At first, Fiverr was viewed as a niche player in the gig economy. In fact, its name is derived from the $5 fee charged for any service offered when the company launched 10 years ago. For that reason, most of those jobs offered required very little effort.

That is no longer the case. The range of fees now goes up to $995 for services that include a wide variety of technical, artistic, and business skill sets.

Last week, Fiverr released its second quarter results that demonstrated how much its role has increased. Top line revenue, derived from fees charged to both buyers and sellers, increased by 82% on a year-over-year (y/y) basis. Active buyers grew 28% and the average spend per buyer increased by 18%.

For the first time ever, Fiverr achieved an adjusted EBITDA (earnings before interest, taxes, depreciation, and amortization) profit, but lost money on a GAAP (generally accepted accounting practices) basis.

However, that loss was minuscule ($0.1 million) and the company is guiding for a 72% – 76% increase in adjusted EBITDA (y/y) during the current quarter. If that happens, the company may produce a GAAP profit later this year.

You may be wondering why a business that has never produced an actual profit is skyrocketing in value. The same used to be said of Tesla (NSDQ: TSLA) and Amazon.com (NSDQ: AMZN), which produced little or no profit for years while their share prices escalated.

That’s the beauty of being a growth stock in today’s stock market. Nobody cares how profitable you are. What they do care about is how much market share you can capture. To that end, Fiverr estimates that the global total addressable market (TAM) for its industry is $100 billion of revenue.

During the most recent quarter, Fiverr generated $47 million of revenue. That is less than 5% of the global TAM, and Fiverr only has one major competitor for that market. It may be too late to get in on Fiverr at a reasonable price. But it’s not too late to buy its only major competitor.

That company is Upwork (NSDQ: UPWK), which is headquartered in Santa Clara (Silicon Valley). Upwork went public in October 2018 at $15 per share. Last week, it was still trading a few bucks below that price.

On August 4, Upwork released its Q2 results. The company generated $87.5 million in revenue, nearly double Fiverr’s total sales. However, it reported an adjusted EBITDA loss of $1.2 million compared to a gain of the same amount the previous year.

For that reason, Upwork’s share price has not performed nearly as well as FVRR. After dropping $4 following its Q2 results, UPWK is up 29% this year. That’s less than a tenth of FVRR’s gain in 2020.

I believe the two companies will eventually merge. Federal regulators may squawk at the deal, but it’s not as if either company has a monopoly on freelancers. Fiverr could use its recently inflated stock as currency to acquire Upwork.

My guess is such a transaction would value Upwork at roughly $20 a share, a 50% increase over its recent value. If you really want to roll the dice, a few days ago you could buy a call option on UPWK that expires this January 15 at the $10 strike price for $5.

If UPWK does shoot up to $20 by then, you could double your money. On the other hand, if it remains below $15, you could lose it all, too.

If you’re risk averse and would rather bet on a tech development that’s more of a sure thing, consider the unstoppable roll-out of 5G wireless. In fact, 5G will allow Fiverr and Upwork to expand their range of services (and increase their fee income at the same time).

With its massive bandwidth capabilities, 5G is expediting the seamless web of interconnectivity known as the Internet of Things, which in turn is fueling the rise of the gig economy. Want to learn more about 5G and how to profit from it? Follow this link for our special report.