Sunrun (NSDQ: RUN) on July 6 announced that it had agreed to merge with Vivant Solar (NYSE: VSLR) in an all-stock transaction.

As you can see in the following chart, the market reaction was very positive. The shares of both companies have made huge upward moves since the announcement. 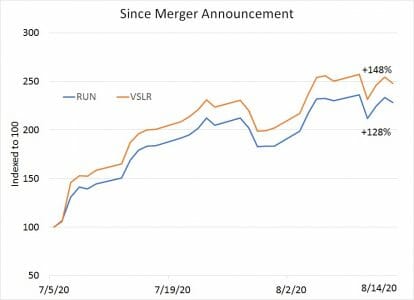 The merger appears to make a lot of sense in that the two companies have complementary businesses that when combined will result in a dominant residential solar specialist with greater market reach and cost savings of about $90 million a year. Thus, buyers are pouring into Sunrun stock. And since Vivint shares will be converted into RUN shares when the deal closes, as RUN becomes more valuable, so does VSLR.

Accelerant for the Stock Price

Indeed, a merger and acquisition (M&A) can significantly move a stock price. For the acquirer, its stock price can move either way. If the market thinks they overpaid or if it feels that the acquisition makes little sense, the share price will fall. But as in the case of Sunrun, when the market likes the move, the acquirer stock will rise and the M&A is a win-win for both stocks.

Because the acquirer typically pays a premium to get the acquiree to accept a buyout, the acquiree’s stock price tends to jump. This is why whenever there’s takeover speculation, the takeover target’s stock price gets a lift. Some investors strategically try to seek out takeover candidates before any rumor leaks out to maximize the gain from the takeover-related rally. After all, if you buy a stock after the rumor is already out, it’s probably already made a big jump.

Some Signs to Watch For

But finding a stock before a takeover is easier said than done. No one can accurately predict a takeover every time, but here are a few helpful signs to watch for. To be clear, having the following characteristics do not guarantee that a company will be taken over, but it doesn’t hurt the chances of them being on someone’s radar.

An industry that has experienced consolidation lately probably has more M&A activity in its future. The smaller players in the industry thus are likely targets of future acquisition. However, because this is such an obvious telltale sign, chances are investors have probably already discounted some probability of takeover into the stock price.

Read This Story: Small-Cap Stocks: The Little Engines That Can

If a small company has a popular niche product or service, it could become a takeover target. Even if the smaller company hasn’t been able to convert the popularity into consistent profits yet, a larger company, which has access to much more resources, could see ways to add value to the niche product/service and to its own existing operations through integration. When you are a large mature company, often it’s easier to just buy out a small company with strong proprietary assets than to develop it in-house from scratch.

A company with a strong balance sheet and no complicated capital structure or overhanging legal or accounting issues is especially attractive. After all, the buyer wants the transaction to go smoothly. Nobody wants to buy something that will cause headaches, no matter how cheap it is.

Foot Already in the Door

A good sign is if the small company already partners with one or more larger companies in certain project(s) and joint ventures. Working together lets the big company get a good look at the other company’s characteristics and helps the execs know each other. If the big company likes what it sees, it could decide to just take over.

In general, it helps to buy stock in a company that has other positive qualities. It’s not a good idea to buy a stock strictly on the expectation of a takeover. If the takeover never happens, you are left with an investment in a lousy company and you probably will end up selling at a loss.

No one understands this takeover dynamic better than my colleague Nathan Slaughter, chief investment strategist of Takeover Trader. Keep an eye out for investment opportunities unearthed by Nathan.

If you’re looking for other promising trends, consider the global roll-out of 5G wireless technology.

Ultra-fast 5G (“fifth generation”) will form the infrastructure of the Internet of Things (IoT) and as such, 5G will revolutionize our lives.

IoT is a seamless system whereby everyday objects are integrated into a data-sharing network. If you’re looking for an unstoppable investment trend, you’ve found it with IoT. Driving IoT will be 5G, the most advanced form of wireless transmission.

5G investments can pay off handsomely, if you pick the right ones. For details on the best 5G play now, follow this link.