The headline to my story is reminiscent of the drive-in “B” movies that I avidly attended as a teenager. But I assure you, it’s the precise description of a legitimate news story.

The drug involved in this weird but true tale is psilocybin, the psychoactive compound found in “magic mushrooms.” Psilocybin is the object of intense medical (and investor) interest. In a minute, I’ll get back to the investment opportunities in psilocybin. But first, back to our horror story about zombie insects.

Researchers in recent weeks have discovered a population of cicadas that are being ruthlessly infected by a parasitic fungus that controls their minds, compels them to frenetically mate, and causes them to infect other insects.

Scientists are calling these unfortunate creatures “zombie cicadas,” because they’re under the spell of massospora, a psychedelic fungus that contains psilocybin.

Infected with the psychedelic substance, the cicadas furiously copulate. Then these fungal spores eat away at the cicadas’ genitals, butt, and abdomen. These devoured body parts are replaced by spores that transmit the fungus to other cicadas. By controlling and sexually stimulating its hosts via the psychedelic drug, the fungus creates a way to replicate. In the final stage, the newly created fungal abdomens erode away and the bugs perish.

Think of it as a psychedelic Summer of Love for cicadas (who presumably die happy).

The presence of psilocybin in the fungal spores is startling scientists, because heretofore the compound had only been detected in magic mushrooms.

Acid trips, to the bank…

Psilocybin already has emerged as a hot area of medical research. You don’t need a PhD to know that psilocybin and LSD (lysergic acid diethylamide) create altered perceptions of reality, causing users to see, hear, and feel sensations that don’t really exist outside of the mind’s eye. But they convey uses beyond just getting high.

Magic mushrooms and LSD are on track to play vital roles in the future of therapy, in medicine and psychiatry. For people with psychological disorders (e.g., traumatized veterans), psychedelic therapy combines drugs like psilocybin with traditional psychotherapy to re-boot the brain and create new neural pathways.

A recent report published in Psychiatry Research provides empirical evidence that psilocybin is effective in the treatment of depression and anxiety. Separately, a team of researchers at the Johns Hopkins School of Medicine recently documented the beneficial mind-alerting effects of magic mushrooms, via a clinical study using a group of volunteers (see graphic). 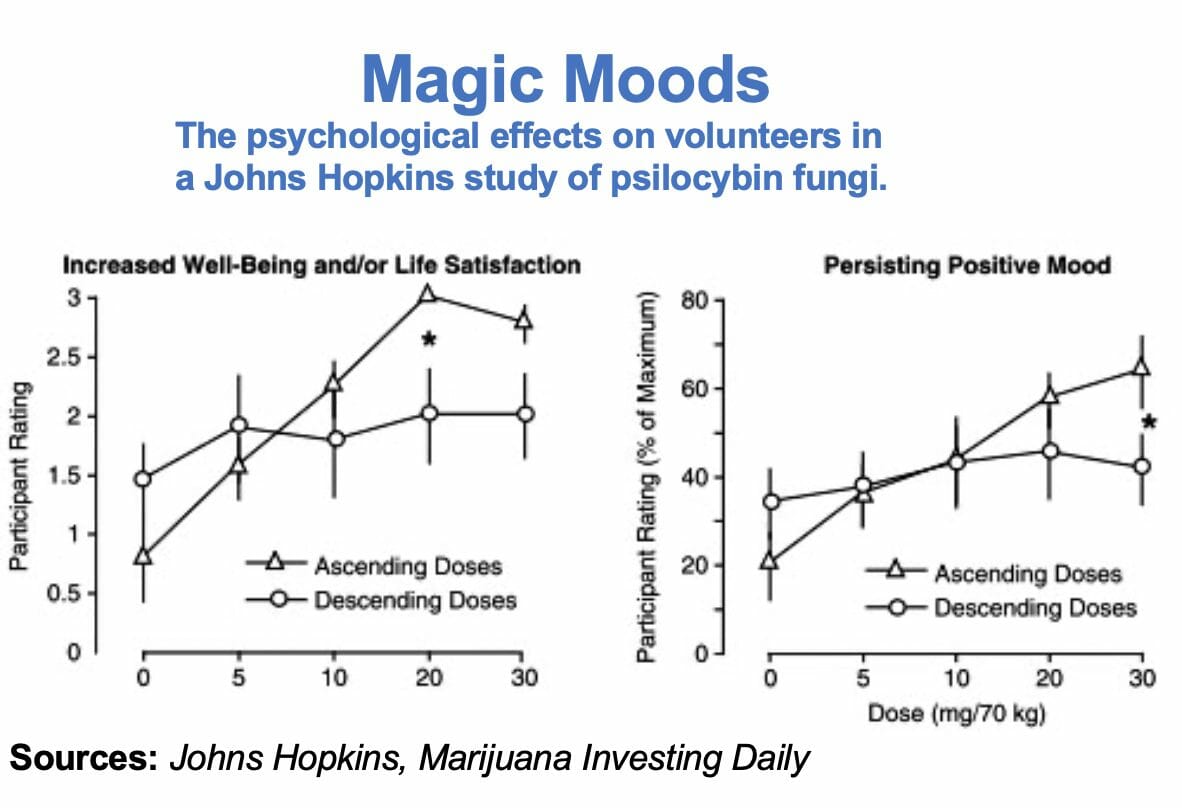 The recent discovery of the psychedelic drug within infected cicadas is opening a new path of pharmacological research that focuses on areas of the brain involved in motor function.

The idea of mind control has fascinated the popular imagination for centuries. In more recent times, the CIA in the 1950s and 1960s investigated LSD as a possible means of creating “zombie assassins” as a Cold War weapon (akin to the brainwashing motif in The Manchurian Candidate).

Luckily for humankind, the CIA’s program (dubbed MK-ULTRA) failed in its efforts. But ironically, the agency’s LSD experiments filtered into mainstream society and paved the way for the psychedelic, anti-establishment counter-culture of the 1960s. Allen Dulles, meet Jerry Garcia.

Read This Story: Acid Dreams: The Profit Potential of LSD

Whether it’s for recreational or medical use, psychedelics are the next big thing. They remain illegal at the federal level, but as Bob Dylan sang, the times they are a-changin’. Activists in more than 100 cities across the U.S. are mobilizing this year to reform their own policies on psychedelics. Scores of initiatives are on state ballots for the November election.

Denver, Colorado last year became the first jurisdiction in the U.S. to decriminalize psilocybin fungi. The historic legal change enacted on May 7, 2019 triggered a seismic shift from coast-to-coast. Scores of cities are now considering easing restrictions on magic mushrooms and other psychedelics. With the public’s increasing acceptance of hallucinogenic substances, we’re seeing the birth of a new consumer industry.

These trends are generating powerful tailwinds for companies involved in marijuana and psychedelics. This year, the first biotechnology firms to develop medical treatments from psychedelic drugs such as psilocybin have gone public on Canadian stock exchanges.

The larger, better-funded cannabis companies are gearing up to make major investments in psychedelics. I’m monitoring the emerging movement to bring psilocybin, LSD and other psychedelic drugs into the mainstream. In the meantime, we’ve pinpointed the best cannabis investments available.

In fact, a small group of everyday Americans are earning up to $55,362 a year from one company’s unique marijuana profit-sharing “program.” Click here for details.

Questions about profitable opportunities in marijuana, psilocybin, LSD, and other psychoactive substances? Drop me a line: mailbag@investingdaily.com